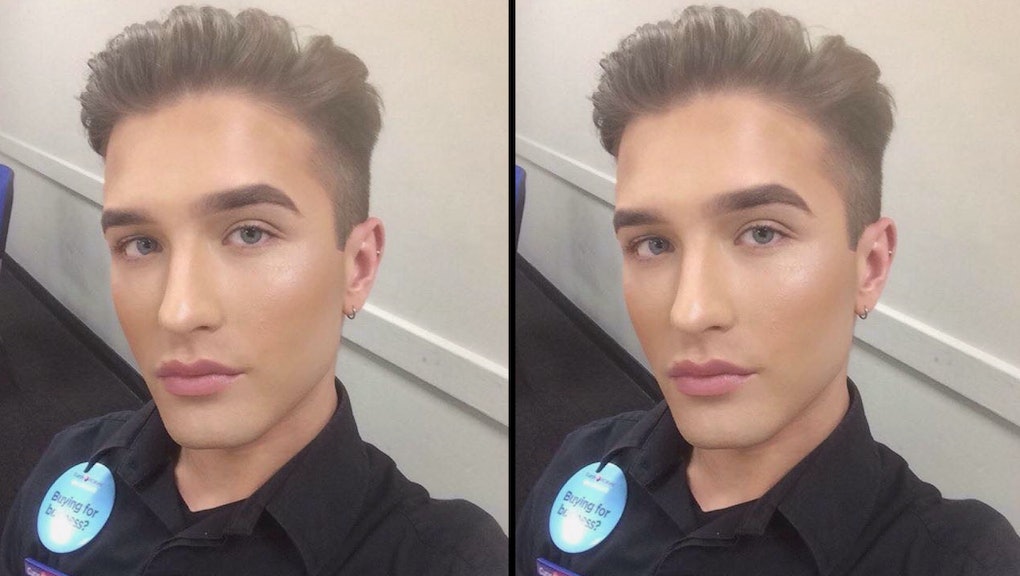 Amid so many makeup companies embracing the idea of men wearing makeup — from Rimmel London to Maybelline to CoverGirl to MAC — you may be hoping that some of that tolerance would trickle down to the workplace. But in at least one workplace in Portsmouth, England, they haven’t gotten the memo.

This was proved on Monday, via an anonymous post on the Facebook page Spotted Portsmouth, which highlights people and events in Portsmouth, England, when a man claimed that although he’s been wearing makeup to work for eight or nine months now, and his workplace has no no-makeup policy, his new bosses now have an issue with it.

“I’ve been working here for about 8/9 months and I’ve never been reprimanded on my make-up before,” the poster wrote. “Actually quite the opposite... some mangers have supported me and complimented my makeup.”

But according to him, with new management at his job, he’s had to stand up for his right to wear makeup to the workplace, just like his female coworkers do to no criticism at all.

“However recently we’ve had to go under new management,” he continued. “Earlier on in the week I came to work as my fabulous self and was told to take off my makeup. I was quite shocked... after I refused, I’m getting told to tone it down? Excuse me? Tone it down? You can’t tone down a masterpiece.”

“I felt this was discriminatory?” he wrote. “Obviously I’m not going to take off my makeup when all my other (female) colleagues are able to come to work as their fabulous selves.”

“Obviously I’m not going to take off my makeup when all my other (female) colleagues are able to come to work as their fabulous selves.”

At the end of the post, he posted an image of himself with a full face of makeup, complete with some rather spectacular highlighting and eyebrow shading.

“This is 2017, a time of year where we celebrate Pride throughout summer and I look hella hot so deal with it!” he wrote. “It’s wrong to blatantly discriminate for whatever reason that may be.”

In response to the post, this guy is already feeling the love. It’s been liked more than 2,400 times, with people writing comments like: “Keep it up! You’ve done nothing wrong,” “If you can do your job and it makes you more confident... it’s nobody’s business but yours” and “I clearly need a makeup lesson from you.”