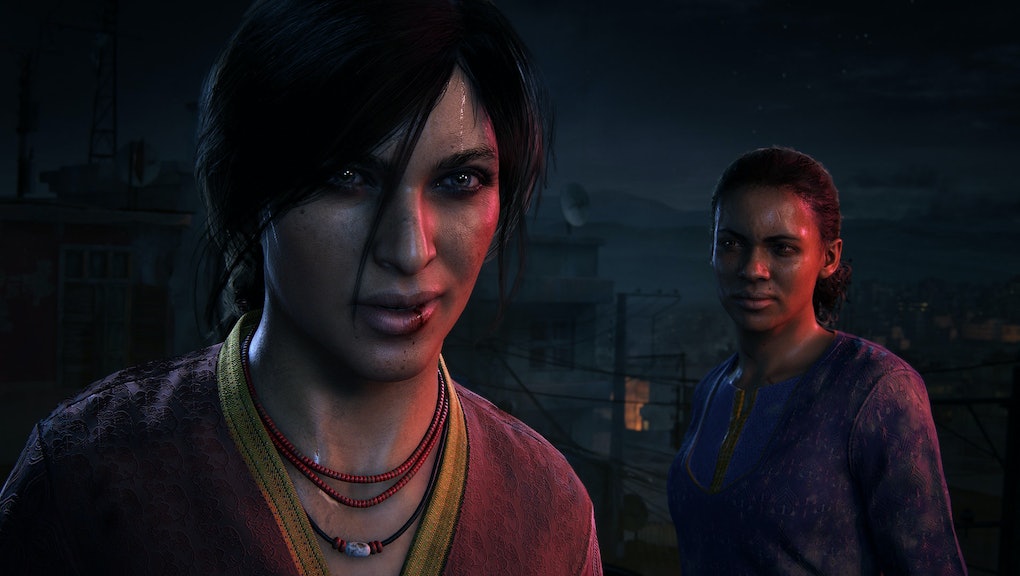 ‘Uncharted: The Lost Legacy’: We need to talk about Naughty Dog’s violence problem

Uncharted: The Lost Legacy, starring Uncharted 2’s Chloe Frazer and Uncharted 4’s Nadine Ross, comes out on Aug. 22. it aims to fill the Nathan Drake-shaped hole in our hearts left by the series’ final installment, A Thief’s End, which released in May 2016.

While I’m always excited at the chance to revisit the world of Uncharted, there’s something I’m decidedly less enthused to revisit: Naughty Dog’s violence problem.

Uncharted: The Lost Legacy: The Uncharted series is notorious for its big body counts

To put it bluntly, Uncharted games have a ludicrous body count. Every villain in the series, from Uncharted 1’s Gabriel Roman to Uncharted 4’s Rafe Adler, offers an endless supply of bloodthirsty mercenaries for Nathan Drake to kill.

Throughout the game, Drake rushes guns blazing into deadly battle situations, including onto Zoran Lazarevic’s armored train, fighting off at least 100-200 Serbian paramilitaries. Not too long after that, Drake breaks a siege of even more soldiers — and a tank — in the mountain village he’s taken to after being rescued.

It’s cinematic, and fun as hell, while you’re playing it. However, when I took the time to reflect on exactly how many people I was expected to defeat over the course of those two sections alone, it gave me pause. That was a lot of virtual men I just killed.

The Uncharted series often gets accused of “ludonarrative dissonance,” a five dollar term that explains the disconnect between a character’s actions during gameplay and how they behave during cinematic cutscenes. Uncharted tends to dominate these discussions because Drake’s personality is laid-back and quip-heavy, which would seem at odds with the sheer amount of death he deals out over the course of the series.

This is also something Naughty Dog is aware of. Neil Druckmann told Rolling Stone that while they had fewer fights in Uncharted 4, it wasn’t because of “ludonarrative dissonance.”

“We were conscious to have fewer fights, but it came more from a desire to have a different kind of pacing than to answer the ‘ludonarrative dissonance’ argument,” said Druckmann. In the interest of doubling down, there’s also an achievement you can get in Uncharted 4 titled Ludonarrative Dissonance for killing 1,000 enemies.

“It’s a stylized reality where the conflicts are lighter,” Druckmann said, “where death doesn’t have the same weight. We’re not trying to make a statement about third world mercenaries, or the toll of having killed hundreds of people in your life.” This is a fair point — not every game can or needs to be Spec Ops: The Line.

But the “it’s stylized violence” argument is difficult to maintain when the game looks as realistic as it does. On the NeoGAF forums, one poster admitted that scenes in the latest Uncharted gave them pause, writing that the game “felt like it was crossing some sort of line I didn’t know I had when it came to realistic violence.”

Uncharted denies you the ability to non-fatally resolve conflicts

Although there are fewer combat sections in Uncharted 4, it’s hard for me to agree that the violence has been toned down. Drake can perform silent takedowns on unaware enemies, and almost all of them provide the distinct “crunch” of a neck snapping when done successfully.

What struck me the most, however, was a part early on the game. Nathan’s brother Sam Drake, having just reunited with him, explains how he escaped from Panamanian jail. During this flashback gameplay sequence, you control Sam as Hector Alcázar, his cellmate, drug baron and all around bad dude, breaks you out with the help of his cartel. Out of curiosity, I decided not to use my gun during this jailbreak sequence to see what would happen.

I won’t keep you in suspense — late in the level the compound is rocked by an explosion, Alcázar’s commandos are killed and I was forced to pick up a gun and shoot two jail guards in order to make my escape. I was disappointed, but not surprised. It was especially disheartening given, especially compared to another game I was playing at the same time: Metal Gear Solid V: The Phantom Pain.

MGSV, in spite of taking place in two active war zones, gives you no shortage of non-lethal options with which to achieve your objectives. I tended to take lethal options only out of panic, duress or frustration in the game. Maybe it’s unfair to compare games with such different themes, but Uncharted 4 came out looking a little worse for the comparison.

So why does it matter? Ultimately, part of this is my personal preference — as I’ve gotten older, I’m less inclined to accept violence as a tidy solution to issues, even in my escapist entertainment. Hell, I recently started playing Legend of Zelda: Breath of the Wild and was disturbed to learn that I can sneak up on sleeping enemies and silently kill them in a game approved for anyone 10 years old and up.

Druckmann is correct — not every game needs to be a meditation on violence. However, I echo the sentiment of that NeoGAF poster from earlier in this piece: at several points during my fourth foray into Uncharted’s world, I had to stop playing because of how real the violence felt.

It’s important to discuss the impact of the choices developers make. Uncharted: The Lost Legacy represents a rare clean slate for Naughty Dog with new characters in the protagonist seat. But depending on the direction Naughty Dog takes for the upcoming story, I may find myself putting down my controller before the credits roll.