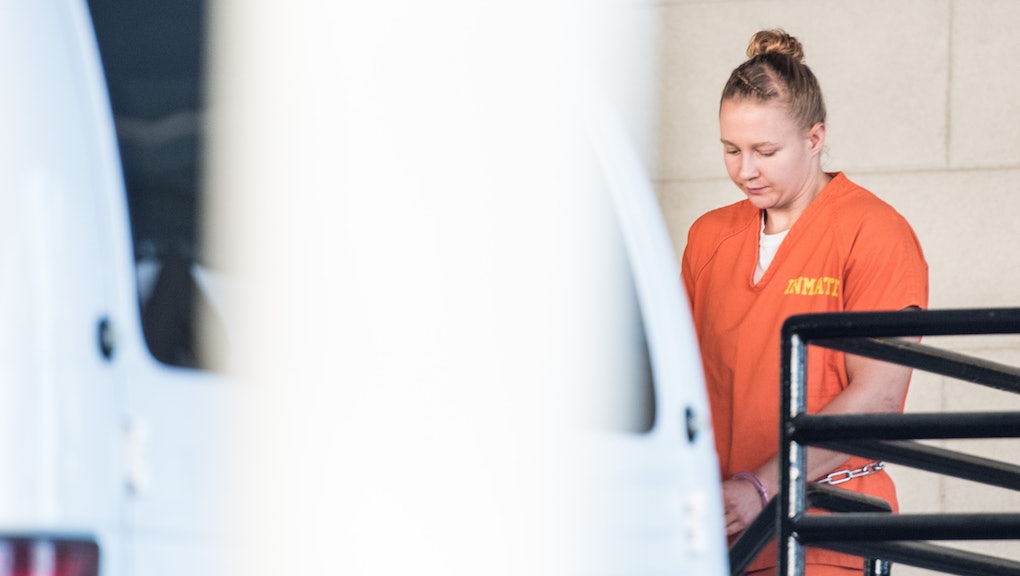 The investigative news site the Intercept has concluded it failed to adequately protect the identity of an anonymous source who provided the site with a top-secret National Security Agency report. The Justice Department has said that source is former government contractor Reality Winner, who has been arrested and since charged under the Espionage Act.

Buried in an announcement that the site’s parent company First Look Media would provide financial support for Winner’s legal defense, Intercept editor in chief Betsy Reed wrote that the site had concluded an internal review that looked into whether it had made the site’s source — who prosecutors claim is Winner — vulnerable to arrest.

“The ongoing criminal case prevents us from going into detail, but I can state that, at several points in the editorial process, our practices fell short of the standards to which we hold ourselves for minimizing the risks of source exposure when handling anonymously provided materials,” Reed wrote in the statement Tuesday.

Reed emphasized the Intercept does not know whether Winner was the alleged source of the NSA report, which revealed the NSA’s conclusion that Russian military intelligence carried out a cyberattack on a U.S. voting software company and had attempted to hack more than 100 U.S. local election officials.

Reed also wrote that the site’s process of verifying anonymously provided materials “carries some risks of source exposure that are impossible to mitigate.”

“Nonetheless,” she wrote, “it is clear that we should have taken greater cautions to protect the identity of a source who was anonymous even to us.”

Nobody at the Intercept has been terminated because of the lapses, Reed told Mic.

As a result of what the review found, the Intercept is revising its source protecting protocols and is retraining its staff members, along with revising and expanding its whistleblower guidelines.

Following Winner’s arrest, the Intercept came under fire for its handling of the classified document. An affidavit of an FBI agent released by the Justice Department seemed to suggest reporters had provided information that helped investigators track down Winner, including from where the document had been mailed.

Under further scrutiny, security reporters and experts found the existence of barely indistinguishable “microdots” on the copy of the NSA report the Intercept uploaded to its website. Those microdots could have been used to identify the time, date and printer from which the document came, although it is unclear whether investigators used that method to identify Winner.

The Intercept had initially pushed back aggressively on the criticism. In a statement, the site said claims made by the Justice Department should be approached with caution. The site’s co-founders, Glenn Greenwald and Jeremy Scahill, issued a combative joint statement several days later accusing reporters of being “irresponsible” when suggesting the Intercept made several errors in its source handling.

In that statement, Greenwald and Scahill said the site was reviewing how it handled the report, and they aggressively distanced themselves from the story.

“Because the two of us did not work in any capacity on this story, and thus had no knowledge of what took place, and because we do not edit the Intercept, we do not face these same [institutional] constraints, and feel compelled to demonstrate how irresponsible and deceitful much of the commentary has been,” they wrote in the statement, which accused journalists of relying too heavily on the Justice Department conclusion.

Intercept managing editor Charlotte Greensit told Mic at the time that the site would be “as transparent as possible with the results” of the review.

On Tuesday, Reed told Mic that the site cannot comment on further details of what the review found because of the ongoing criminal case against Winner.

Winner is being prosecuted under the Espionage Act, to which First Look Media and many press freedom organizations have vigorously objected. Reed said the Press Freedom Defense Fund would have taken Winner’s case even if she was not accused of providing classified information to the Intercept, and that the Intercept would stand with Winner if she was not otherwise connected to the site.

“We at the Intercept have always opposed the use of the Espionage Act against government whistleblowers,” Reed wrote Tuesday. “Our stand is unwavering and we would object to the prosecution of Winner under the act even if we had no connection to the materials she is accused of disclosing. The First Amendment, not the Espionage Act, should be the framework for viewing the act of whistleblowing.”

First Look Media’s Press Freedom Defense Fund is providing $50,000 in matching funds to Stand With Reality, an organization that is raising money for the cost of Winner’s legal defense and aims to bring public awareness about her case. First Look is also sending its legal counsel, Baruch Weiss, to help support Winner’s legal defense.

Winner has pleaded not guilty to the charges she faces. She has been denied bail.