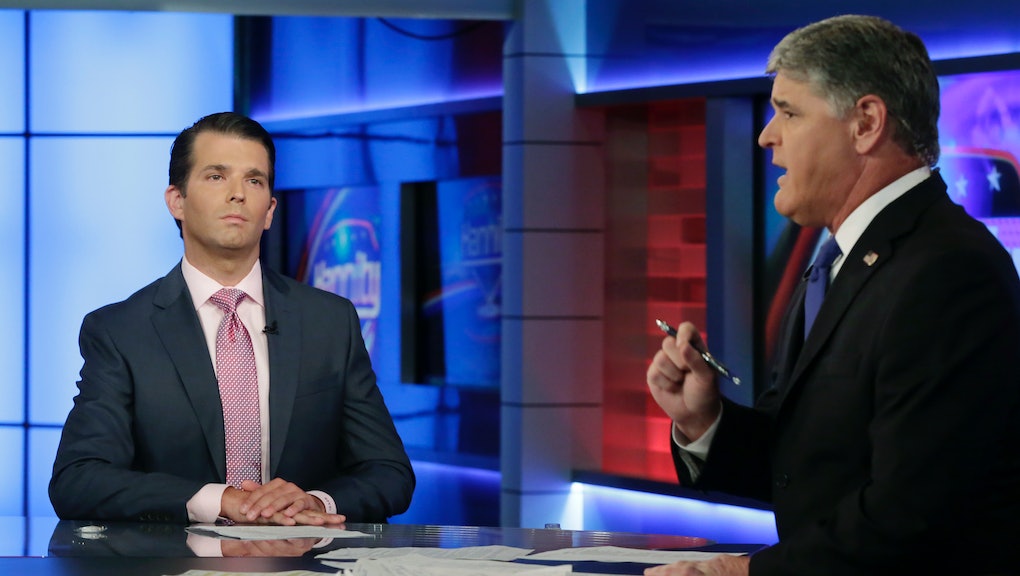 On Tuesday night, Fox News host Sean Hannity promised to ask Donald Trump Jr. “every single question” he could think of about a series of emails that Trump Jr. sent and received to set up a meeting with a Moscow-linked lawyer who claimed to have damaging information on Hillary Clinton in June 2016.

The president’s son had released the emails on Twitter earlier in the day ahead of yet another New York Times report about the meeting.

The resulting Hannity interview offered up a jumble of half-completed and occasionally contradictory explanations for the revelations, which has reignited talk of possible Trump-Russia connections that is the subject of an ongoing special counsel investigation.

Hannity and Trump Jr. downplayed the meeting, emphasizing that it was short and that it resulted in nothing of consequence. Hannity also criticized the mainstream media for not covering the story of a Democratic consultant with ties to the Ukrainian embassy.

“I can’t help what someone sends me,” Trump Jr. said of the emails at one point, later adding that the meeting was “a courtesy to an acquaintance” before arguing that anyone in his position would have done the same thing.

“There isn’t anything else there,” he added later.

The collection of half-baked defenses on display Tuesday was emblematic of right-wing media’s struggle to coalesce around a coherent alternative narrative to defend Trump Jr. amid the flurry of scrutiny.

Right-wing media, which has provided favorable and uncritical coverage to President Donald Trump and his family, has often been quick to settle on a unifying counter-narrative. In the aftermath of former FBI director James Comey’s testimony, for example, the pro-Trump media quickly settled on the alternative talking points to frame the testimony as a victory for the Trump administration.

But in the hours following the publication of the Trump Jr. emails, the pro-Trump media spun its wheels trying to determine the best route to take. Some sites, like Drudge Report, pushed out straight news reports without the usual spin; others latched onto Trump’s own defense of his son’s email release as a heroic attempt at transparency. InfoWars’ Alex Jones suggested that Trump Jr., in taking the meeting, was trying to expose Russian spies.

Other pro-Trump sites balked at the release. One headline from the conservative site Townhall read: “Wow: Donald Trump Jr. releases the emails — and they look a lot like, um, collusion.”

As CNN’s Oliver Darcy noted Tuesday, Fox News did not immediately jump on the story, and quickly moved on after a short report. Later, Fox host Jesse Watters defended Trump Jr., saying that he was a “victim;” anchor Martha MacCallum suggested that the people “don’t care about this story.”

The circumstances of Trump Jr.’s email release have complicated the ongoing narrative in pro-Trump media that mainstream news is making up facts to antagonize Trump and his family. The fact that Trump Jr. released the emails himself, and that the release confirmed the New York Times’ reporting, is undeniable, except to a few pro-Trump pundits who seemed to be counting on their readers not to review the emails and the Times stories themselves.

Trump Jr.’s primetime interview with Hannity, which unsurprisingly landed on the conservative network Fox News with a host who once appeared in a Trump campaign commercial, seemed like an effort to tamp down on the story once and for all, and double down on what has been a successful line of attack against “the media.” And the appearance did succeed in feeding right-wing media with a grab bag of quotes and talking points to lead their coverage.

But by Wednesday morning, even as Trump tweeted himself in defense of Trump Jr., many pro-Trump sites had decided to move on from the story entirely. The Daily Caller led with a story on the Clinton email scandal, Breitbart led with a story about a lawsuit brought by people blocked by Trump on Twitter, and the conservative blog LifeZette had scrubbed Trump Jr. stories from the lead story carousel on its website. Trump tweeted approvingly of an article in the conservative Washington Times that, citing a single unnamed Trump supporter, said that the real story was that Democrats have been colluding with Russians all along.