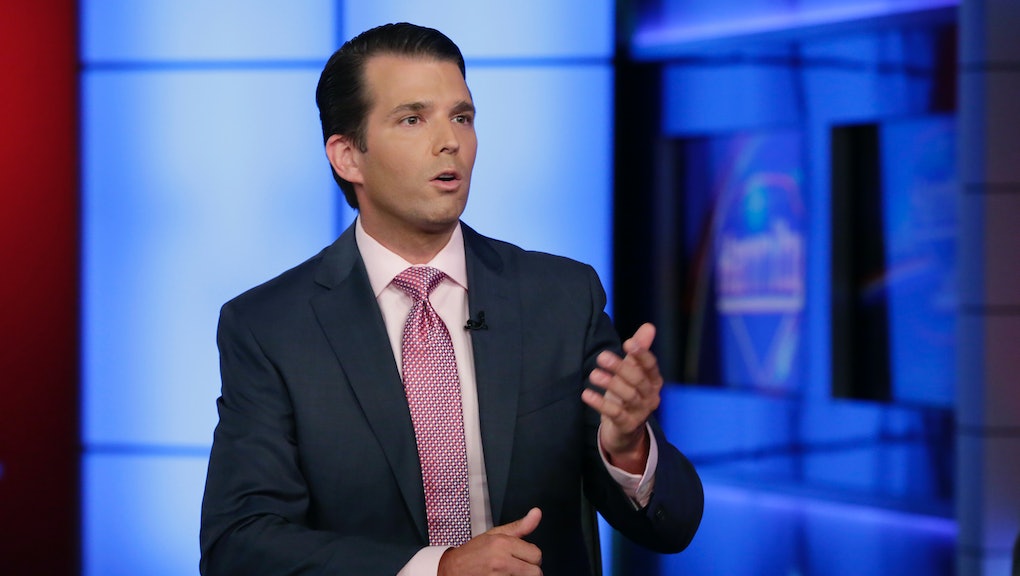 Your guide to Donald Trump Jr.’s emails and Russia trying to influence the election

This is Mic’s daily read on Donald Trump’s America. Welcome to the political newsletter that wants you to know Republicans could still be working on health-care in mid-August.

More: The president is standing by his son. Almost no one else in Washington is.

Even more: With no clear deal emerging, Republicans are going to work through at least mid-August.

Yes, more: Today will mark one of the largest online protests in history. 80,000 websites want you to support net neutrality.

Trump’s agenda today: Nothing public, other than Trump leaving for his trip to Paris.

Washington exploded with questions and criticism on Tuesday following the latest revelations about Donald Trump Jr. and his meeting with a Russian lawyer. We’ve got coverage of the latest news from every angle.

“I love it:” The president’s eldest son released a series of emails on Tuesday that showed his interaction with Rob Goldstone, the publicist for a Russian pop star with ties to Russian President Vladimir Putin. In those emails, Trump Jr. is clearly told that a meeting with a lawyer could yield “Russian dirt” on Hillary Clinton tied to the Kremlin’s efforts to help Trump. “I love it,” Trump Jr. responded.

The emails are proof that what the president and his supporters have said for months — that Trump’s campaign was in no way aided by Russia — is untrue.

Read a comprehensive timeline about the emails and read the New York Times story on how Trump Jr. burned the newspaper by releasing the emails after the Times informed him they had them.

It’s not just Trump Jr. The emails and additional reports show the potential trouble for Trumpworld extends beyond the president’s eldest son. We break down the seven people you need to know in the Trump email scandal, plus how legal experts see this shaking out for players like Jared Kushner, who, for the third time, failed to disclose a meeting with a Russian to the federal government. Knowingly omitting such meetings is a federal felony.

Legal problems surround this meeting. And not just for Kushner. Trump Jr. could have violated federal election laws, the Times reported. Jay Sekulow, the president’s lawyer, says Trump had not seen the emails until they were posted on Twitter. Both Kushner and former campaign chairman Paul Manafort had already received them.

Special counsel Robert Mueller is reportedly looking into the emails and meeting as part of his inquiry into potential Trump campaign collusion with Russia. A former National Security Council official told Mic not revealing these emails until now means Russia could potentially have blackmailed Trump with these for months.

Hannity interview. Trump Jr. responded on Tuesday night during an interview with Fox News’ Sean Hannity. He said he has “probably” met with other Russians and in retrospect, would have handled the meeting differently.

Democrats are having a field day. On Capitol Hill, Democratic senators were grinning as they faced questions about the Trump Jr. emails. Clinton running mate Tim Kaine, a senator from Virginia, said the Russia story is moving toward “treason.”

Even House Oversight Chairman Trey Gowdy, a conservative South Carolina Republican, said the White House needs to come clean about any contacts with Russia. Watch video of senators from both parties expressing deep concern about the meeting and emails.

Dad is standing by Jr. The president called his son a “high-quality person” on Tuesday and tweeted Wednesday morning that Trump Jr. was “open, transparent and honest” in his interview with Hannity.

Behind the scenes, Trump is reportedly in a “rage” directed at the media, not his son, over this latest Russia story.

• The Senate will not leave Washington in August. Senate Majority Leader Mitch McConnell (R-Ky.) is keeping senators in town to continue work on health care. That doesn’t mean passing the latest proposal, which is expected Thursday, will be any easier.

• Wednesday is the net neutrality day of action. 5 websites explained to Mic why they are fighting a “battle for the net.”

• Christopher Wray, Trump’s nominee to run the FBI, will appear before the Senate Judiciary Committee today, two days after the White House canceled plans to construct a long-planned FBI headquarters in Maryland.