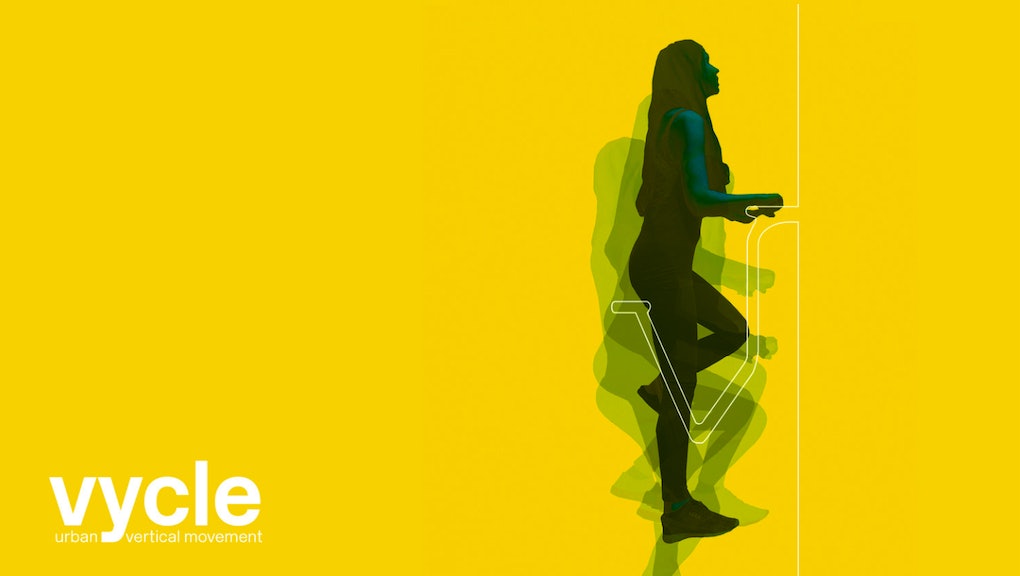 When making your way up a building, the options are limited. You can take the long route — the stairs — and squeeze in a workout. Or, if you’re lucky, there’s an elevator you can take. For those who want something in between, or people without access to an elevator, there’s an ingenious new system that makes vertical transportation seamless by letting you pedal your way up to whether it be a skyscraper or a floor of an apartment building.

Called Vycle, the pedal-powered transportation system is the brainchild of Elena Larriba, a Royal College of Art graduate. The inspiration: bicycles.

“There are currently two main methods for vertical transportation that have prevailed for the last 100 years, the stairs and the lift,” Larriba told Dezeen. “Stairs are bulky and unattractive, especially in high rise buildings where people don’t often use them, and lifts require a lot of energy in order to move one person a couple of meters up. This carves out an area of opportunity that sits between the two.”

The space-saving solution, an alternative to the elevator, is simple: the system is attached to a surface like the side of a building, scaffolding or cranes. It looks like a vertical rail with the front end of a bike attached to it. Users hop in with their cycle and pedal — the cyclical movement powers the device for ascending and descending.

“The system is balanced with counterweights leaving the user body as the only weight to overcome. Using a gearing system similar to how bikes works the user can decide how much effort they want to put to ascend or descend. The prototype developed until now is just a proof of concept to test how does it feel to lift your own body weight. In the prototype, the gearing ratio is set to a 10% which means that a person that weight 70kg only needs to push 7kg. Although the working prototype is as fast as the stairs, the vision for Vycle is to incorporate electrical assistance that could make the system faster and enjoyable accommodating different ages and abilities. It’s a personal lift appropriate the height between two and six floors where you decide how much effort you want to put and how much you want to be assisted.”

Not only is the human-powered gearing system ideal for highly populated cities, but it Larriba says it can used on construction sites of tall buildings.

“The lightweight, low square footage and flexible aspect of the system makes it suitable for retrofitting and temporary installations like in the use of scaffoldings or cranes,” she said. “In the construction sector, around a quarter of the workforce is aged over 50. Vycle is an alternative to long ladders often used in these temporary works that can offer the user a more sustainable and safer way to navigate through scaffoldings, cranes or transmission towers.”

But don’t expect to see a Vycle in the market any time in the near future. The idea is “an early concept” that needs further development.