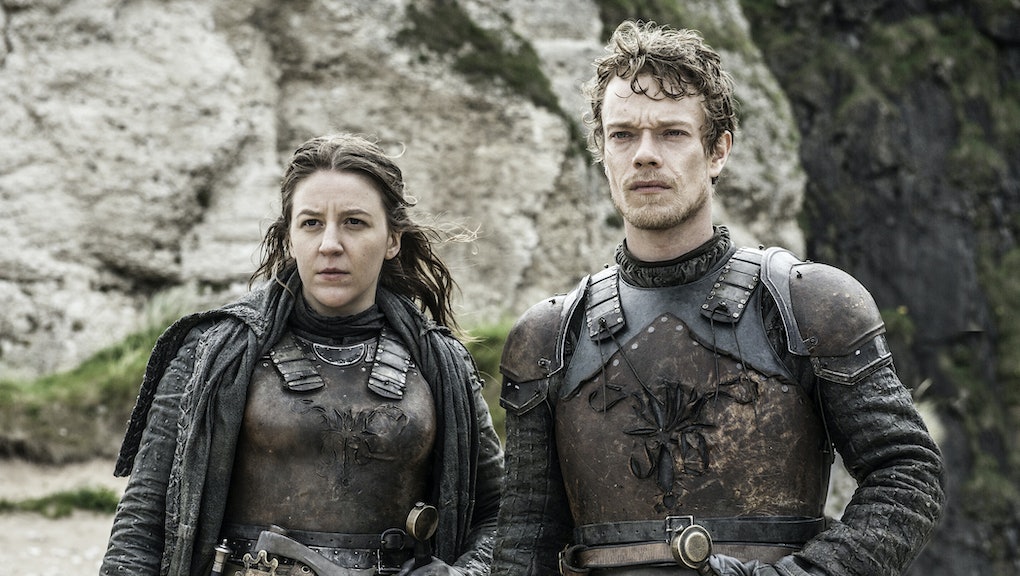 On a sprawling series like Game of Thrones, which spans two fictitious continents and so many storylines you’d need a castle’s worth of whiteboards to keep track of everyone, the audience’s perception of certain characters tends to change over time. For instance: You probably despised Jaime Lannister after he pushed Bran Stark out of a tower window way back in the pilot. Now, heading into season seven, Jaime is a tragic but endearing antihero.

But really, is there anyone more contentious on Thrones than Theon Greyjoy? He’s committed atrocities — burning two Northern boys and posing them as Bran and Rickon Stark comes to mind — and even groped his own sister, Yara, before realizing who she was. But Theon’s also arguably suffered more than anyone else on the show. He was tortured and mutilated by Ramsay Bolton (formerly the worst person on television) for the better part of three seasons and abused to the point that he went by the name “Reek,” a subhuman servant to the Boltons. He reclaimed his identity as Theon in season six, supporting Yara’s claim to rule the Iron Islands and teaming up with the Westeros-bound Daenerys Targaryen. Right now, Theon’s on a bit of a redemption tour.

All the while, actor Alfie Allen has handled Theon’s intense transformations — from swaggering wannabe ruler to tortured prisoner to soft-spoken, caring brother — with nuance and grace. The 30-year-old London-born actor isn’t the face of the show in the same way as Jon Snow (Kit Harington), Daenerys Targaryen (Emilia Clarke) or Cersei Lannister (Lena Headey), but he’s been around from the onset, and is still a steady player as Thrones begins to narrow its focus in the penultimate season.

In a phone interview, Allen discussed tackling Theon’s most challenging scenes, his character’s journey and even a little about what to expect from season seven. This interview has been edited and condensed for clarity.

Mic: It feels like with each passing season of Thrones, everything surrounding the show is shrouded in even more secrecy. What are the challenges of keeping everything so tight-lipped?

Alfie Allen: Yeah, you just sort of have to watch what you say, just keep repeating “expect the unexpected.” (laughs) But yeah, it’s such a huge show now that I don’t think anybody wants to ruin it for themselves. Obviously, people want to get their scoop on what’s going on, but at the same time I think there’s been scripts that have been leaked on the internet, so it’s really in people’s own ballpark if they want to ruin it for themselves.

I don’t think people do want to do that, you know? There’s definitely times when we’ve seen drones flying overhead and security guards have had to shoot them out of the sky. If people want to go on online news sites and watch the scenes being filmed and ruin it for themselves, well, that’s their own choice.

But in terms of us as a group and having to keep tight-lipped on it, we have the HBO snipers to remind us of that, to watch out for that red dot.

Theon’s had a whirlwind of a journey on Thrones, perhaps more than any other character. How do you think the perception of your character has changed among fans?

AA: I wouldn’t really be able to say. I’ve not really had any sort of different reactions from people, everyone has always just been very nice and the only thing that I’ve ever really noticed was that it seems to make people happy. When people see me on the street, they just seem to be buzzing and they never really go on about my character, specifically. It’s just always been general about the show and how great it is and how much they love it.

I’ve had a few encounters with people where they’ve suffered some sort of physical torment in their lives and they’ve said the treatment I received in the show has definitely given them some sort of strength, on some sort of level.

I guess different people feel differently about the show, so some people relate to different types of characters and some people just want escapism.

Theon’s had so many brutal, tragic scenes over six seasons — especially opposite Ramsay Bolton. How did you prepare for some of the most challenging scenes?

AA: Pain’s not really something that you can gauge. There’s definitely an aspect of Stockholm Syndrome in there somewhere, between those two, without a doubt. But it’s a lot — how do you research getting a nail driven through your foot? It’s not something you can really research, it’s just pain.

Being stuck in a dark room for three months with [actor Iwan Rheon, who played Ramsay] was really all we needed, you know? We just fed off each other. I wouldn’t be able to speak for Iwan and research what he did and what he went into, but in terms of myself, it was pretty much there. There were certain performances and different things that I’ve seen that definitely had some influence on me, but I preferred to leave things for the day. If the energy’s not right on the day — you can rehearse things and go through things as many times as you like. But if you get there on the day and the energy’s not right, then you just got to work with what you’ve got, is what I’m saying.

Theon’s such a compelling character, because he actually starts out quite relatable: He just wants to be understood and accepted. That’s something he never got with the Starks, he was always reminded that he was an outsider at Winterfell. That still feels like an integral part of his character, and he may be finding that connection with Yara. Can you talk about their relationship in season seven?

AA: Not really, is the short answer. I think, yeah, the relationship between Theon and Yara, where we left it, they just formed an alliance with Daenerys. So I’d say that their relationship will continue, just seeing how that new leadership’s going to evolve and how it’s going to change their lives and where the paths take them under the new leadership of Daenerys.

Aside from Gemma Whelan, who plays Yara, it appears that your character is going to be interacting with characters — and in turn, actors — that you hadn’t previously shared the screen with much, if at all. Was there a particular actor you were excited to work with more extensively?

And yeah, just to be introduced into Daenerys’ world is definitely something that hasn’t really been a part of the Greyjoys. With the whole fantasy and magic of the Game of Thrones world, we’ve never really been in the Greyjoys’ world. It’s all very practical and realistic and salt of the Earth, that sort of stuff.

As an actor, what excites you about playing a character like Theon who goes through all of these intense, winding arcs?

AA: If you’d say to any actor, “You get to play three parts in one person, how do you feel about that?” I’m pretty sure they’d be ecstatic. It’s definitely always a challenge to find empathy — as a viewer, but also as an actor — for this character. It’s difficult, a lot of the time.

To find that in myself, it’s really interesting, as an actor, to be able to explore that.

Aside from Game of Thrones, you’re probably most recognizable you for your part in John Wick, where you play the son of a mafia boss. Do you think — between Game of Thrones and John Wick — that you may get typecast into these roles?

AA: What, me? (laughs) In terms of his role as being the son of a mafia boss, who’s trying to survive in this environment — really, just to please his father — yeah, I would say that is a similarity [with Theon]. But in terms of the roles, they’re completely different. So no, I wouldn’t really compare them, but there’s definitely similarities.

Viewers only have two more seasons of Thrones — and you’ve only got one more to film, assuming your character survives this season. The show is obviously a cultural phenomenon with a rabid fanbase. What has that experience been like from the inside?

AA: It’s always been lovely. When I first started the show, I always knew there would be some fandom to it, ‘cause there were fans of the books who were already invested in it. But then also, it had the HBO tag and those are the people you want to work with in TV.

It was great. I didn’t foresee the whole worldwide phenomenon coming, but it happened and it’s been great. It’s just made people happy, from what I’ve seen, so that can only be a good thing.