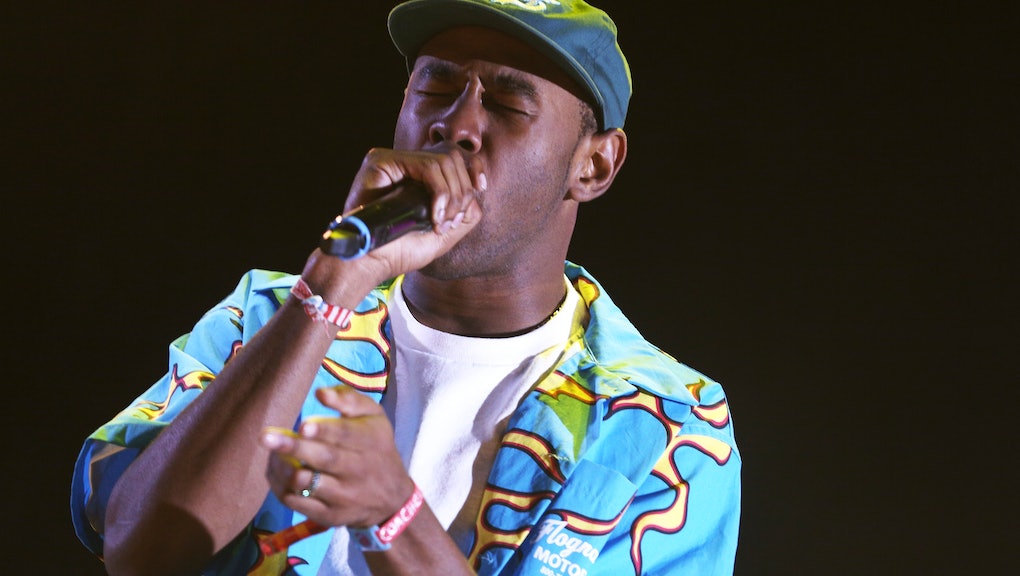 If Tyler, the Creator does come out on his new album, the leak robbed him of his moment

There’s an unfortunate irony to the fact that Tyler, the Creator may have possibly been outed as gay or bisexual on the fifth anniversary of Frank Ocean’s 2012 record, Channel Orange. On Monday, headlines started flying around the internet that 26-year-old Tyler appears to come out as an LGBTQ person on his upcoming fourth album, Scum Fuck Flower Boy, which leaked recently. Whether Tyler actually identifies as queer or bisexual remains unclear (he hasn’t yet publicly commented on the leak or the speculation), but the album’s rollout will most likely be dominated by loud discussions of the ways that Tyler’s sexuality might cast a new light on the provocative content of his repertoire.

While those conversations are warranted, it’s hard to believe this is the way Tyler imagined the lead-up to his new record would go. Frank had space for elegance: a letter posted to his Tumblr (and then packed in the liner notes as a text file screengrab) explaining that his proper debut album is, among other things, about a boy he once loved. We arrive at Tyler’s new full-length not with the quiet meditation that was granted to Channel Orange, but with a host of questions.

(It should be pointed out that there is a possibility that Tyler’s camp might’ve leaked the album to drum up some news and anticipation before it drops, but I’d rather give the artist the benefit of the doubt.)

Flower Boy is scheduled for a July 21 release but, as mentioned, the album leaked online over the weekend, putting it in the hands of hungry listeners and Genius annotators ahead of schedule. On two of the new songs, “Garden Shed” and “I Ain’t Got Time!,” Tyler apparently mentions, in one way or another, that he’s attracted to men. He appears to play off the image of “the closet” on “Garden Shed,” referring to it as a shed: “Garden shed for the garcons/ Them feelings I was guarding.” He’s much more forward on “I Ain’t Got Time!” rapping, “Next line I’ll have ’em like, ‘Whoa’/ I’ve been kissing white boys since 2004.”

The beauty of listening to an artist reveal a part of themselves that is, perhaps, still in bloom is the joy of hearing the petals crack open for the first time. But what we have now is a collection of lyrics set to music that many people haven’t heard yet — the record’s out in the world, but not officially available for mass consumption. Another thing we have now: an excuse for fans and writers to comb over Tyler’s lyrics and search for any hints about his sexuality, in his older work and on Flower Boy.

It’s safe to bet that much will be made about Tyler’s past use of homophobic slurs — that this will be the latest development in the debate that’s hung over his entire career. When he released his debut album, 2011’s Goblin, NME erroneously claimed that, over the course of the record, Tyler utters the word “faggot” or a variation of it 213 times — Fader did its own count and reported spotting the term nine times. Over the years, the rapper has weathered serious controversy because of his use of homophobic language, but he’s routinely pleaded innocent to hating gay people.

He’s long said that he’s personally not offended by any words and doesn’t subscribe to the idea that certain terms hold any special sort of power — a defense that may seem contrived, but that doesn’t necessarily mean it’s inauthentic. (To be fair, though, NME also reported in 2011 that Tyler once said to them, “I just think ‘faggot’ hits and hurts people. It hits,” which suggests that he’s aware of the power that word has.)

Of course, there are many, many people who are offended by certain words, and who find a term like “faggot” to be deeply violent and offensive. It’s understandable why Tyler’s use of the word is upsetting to people. But it would be a disservice to Tyler as an artist to write him off as a hatemonger or mischievous provocateur without first considering his outlook on language, the pro-LGBTQ moves he’s made in the past several years and, yes, the new lyrics that have surfaced.

The tension Tyler places upon his queer and more overtly queer-friendly fans is layered, especially if the recent speculation proves true. There’s a long history of artists from marginalized backgrounds who look to change understandings of dehumanizing language by adopting a slur themselves — whether it’s The Slants frontman Simon Tam taking his seven-year legal battle over his band’s name to the Supreme Court (and winning), or Ice Cube recently bringing his “depower the n-word” campaign to Real Time With Bill Maher, where he verbally think-pieced Maher into submission.

In both of those cases, the artists were seeking a kind of inoculation against the sharply painful violence felt by targets of bigoted language. But Young and Cube belong to communities that, after centuries of hate and silence, have cause to reclaim those particular slurs. At this point, Tyler hasn’t said whether or not he identifies as queer, so it’s unclear if that same logic applies to his vocabulary choices. But if we take him seriously as an advocate for queer people, does that change how we should think about his past language and the allegations of bigotry he’s faced thus far?

This raises another question: Should we have taken Tyler at his word before? When asked about why he uses the word “faggot” so much in his music during a 2013 appearance on The Arsenio Hall Show, Tyler answered rather poignantly, “The way I see things, you chose to be offended if you care more about stuff like that … Frank [Ocean]’s gay, I use that word all the time. He doesn’t care because he knows me, he knows when I say that word I’m not thinking of someone’s sexual orientation or anything.”

What might sound like victim-blaming or the “I have a gay friend” excuse (which, OK, he definitely used there and has elsewhere) is more or less a criticism of how people — queer or otherwise — who are offended by the word “faggot” prioritize that feeling over other types of violence against marginalized groups. If you’re someone who’s vocal about the use of that word, but quiet about things like the suicide rate for black queer people, or the life expectancy for trans women of color, well, you’re prioritizing the wrong issue. We can and should be mindful of and concerned about both, but it’s much easier to sound the alarm over word choice than it is to really engage with the sort of tragedy that defines the fate of so many queer people.

But if Tyler’s aim in using that sort of language has truly been to highlight that sort of discrepancy, then the message hasn’t really translated. The first few lines of Goblin offer a plausible answer as to why some people might not engage with his art seriously: “I’m not a role model/ I’m a 19-year-old fucking emotional coaster with pipe dreams.” Tyler’s utter delight in being a raging youth made it easy to cast him as an arrogant and petulant kid, not a thoughtful artist.

These new lyrics aren’t the first we’ve heard from Tyler on his sexuality. His social media accounts have become a space for him to outwardly interrogate the subject. Back in April 2015, Tyler jokingly tweeted that he “tried to come out” of the closet but no one cared. A year later, an image of the artist holding hands with a white man while wearing anti-homophobia merch ahead of Pride appeared on his Tumblr, captioned with a long diatribe that questions socially constructed identities and the paralysis that comes along with them. While some thought the shirt — which features a recycled white supremacist symbol in rainbow wash — was more than just a fashion statement, there was already a different idea about Tyler that was fixed in the public imagination. Again, it’s not clear if Tyler actually identifies as gay, bisexual or anything other than straight, and for him, that distinction might not matter. But his sexuality should matter, at least to some degree, to anyone who’s dismissed him as a hateful figure.

Learning to sharpen personal defense mechanisms against weaponized language is a process familiar to any of us who’ve faced subjugation. When celebrities, young and old, take on this struggle, they become spokespeople for highly diverse communities with varying levels of sensitivity. The issue in Tyler’s case is not whether he’s queer, but rather if his controversial and flippant use of a slur makes him untrustworthy as an advocate for queer people. The answer to such a question relies heavily on what one already thinks of him as an artist. If he’s just a punk with a loudspeaker, it’s much easier to tune out what Tyler might have to say.

And here we find ourselves, once again, parsing out aspects of Tyler’s art rather than taking the music in as a whole — that’s what I’m doing here in this piece. Regardless of whether we believe he’s gay or bisexual, whether he’s a homophobic problem child or an artistic genius, it’s clear Tyler was robbed of the time he could have allotted himself to speak to these new revelations personally. That’s an indignity no one deserves.