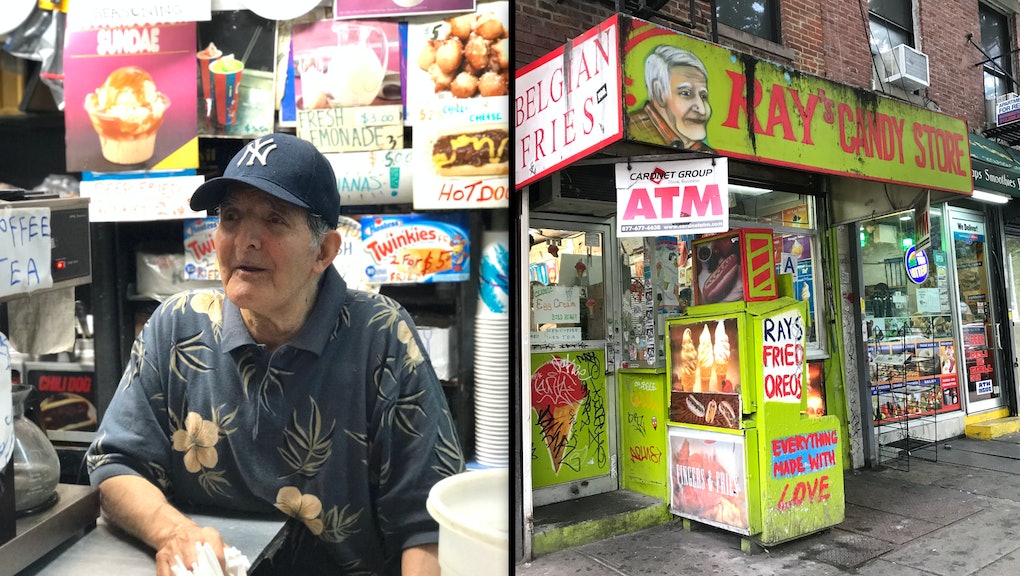 On Jan. 1, 2033, Ray Alvarez plans to celebrate his 100th birthday by hosting 100 naked women in his impossibly narrow sweets shop on Avenue A, with an open invitation to the public. (A small caveat: “If anybody wants to come, [they] have to be naked,” Alvarez said.) The party will be in line with the notorious burlesque-themed soirées friends have been throwing the shop owner for years. But at 100 years old, after the party, Alvarez will take his first vacation in... forever.

Alvarez is the owner of Ray’s Candy Store, a 24-hour miniature mecca to all things sweet (and fried) in Manhattan’s East Village that he’s been running for more than 40 years. Scattered signage marked with handwritten prices in sharpie is taped up across the walls to serve as the menu. Look around and you’ll find something that calls you: sugar-coated beignets, fried Oreos, fried candy bars, Belgian fries, various sundaes, shakes and towering soft serve swirls, hot dogs, chicken fingers, fried bananas — the menu is exhaustive.

At 84 years old, Alvarez currently works the overnight shift from 4 p.m. to 7 a.m., after which he’ll trek upstairs to his apartment above the store to sleep, read and listen to BBC. If he gets weary during his working hours, Alvarez will sometimes lie down on the floor behind the counter (the store is usually pretty quiet at 4 a.m.), or, when he’s got an employee on duty with him, he’ll rest on the makeshift bed in the kitchen (it’s actually just a rug the size of a yoga mat). To say he is deserving of a vacation 16 years from now is an understatement.

Given that New York City is the most difficult place to keep a restaurant afloat, Alvarez’s 40-some-year run is a considerable accomplishment. His backstory is a sort of American Dream storyline mixed with Hunter S. Thompson-like narrative and an almost unimaginable reserve of perseverance.

The short of it: After nine years in the Iranian navy, at the age of 31, Alvarez jumped ship — not figuratively — and swam to American shore. He worked at a coffee roaster in Miami and eventually hopped on a Greyhound to New York City (he said he was running from the FBI, who pressed him for identification he didn’t have). The first time Alvarez saw snow — and experienced the East Coast cold — was outside of Port Authority.

The Iranian expat had $7 to spend on his first winter coat, and even though it cost $10, the shop owner let him buy it for $3 less. From there, Alvarez’s life followed a pattern of hard work, good fortune and kindness from strangers. In his first hours in Manhattan, after acquiring a coat, he stumbled upon a YMCA that offered room and board for homeless people. When he worked as a waiter at New Jersey’s Short Hills Country Club, he made good with the manager, who took Alvarez with him to many other well-paying jobs.

Years later, Alvarez borrowed $11,000 for rent for the Candy Store from the “mafia club” that resided at a restaurant a few doors down. Every Sunday, Alvarez recalled, a hitman from said club would visit the store to collect $550 in interest. Alvarez always paid up — until he couldn’t anymore. In this pickle, Alvarez called a friend who dropped off $11,000 to his door the next day. As Alvarez tells it, there was no shortage of good people gifting him the exact cash amount he needed 24 hours after making a phone call. In 2010, after a bout of financial trouble, regulars and neighbors of Ray’s helped him raise $3,500 to pay rent and buy a host of new equipment.

When asked why he thinks people have been so generous, Alvarez thought for several moments. “Usually Americans are like that — good,” he said. “Americans are good and generous.” He said he’s witnessed “good people” and “bad people” through the tiny walk-up window in his store, but through it all, he remains “crazy about America.” “In other countries, we don’t know sanitation, we have one policeman, education goes to fourth grade,” he said, listing off other reasons why America is so great.

In 2011, at 78 years old, Alvarez — whose birth name was Asghar Ghahraman, but was changed working in Miami for fear of deportation— became an official American citizen. A customer who was a lawyer was determined to get Alvarez naturalized after learning of his story. Within six months, Alvarez said, the lawyer had set him up with official documents and the financial benefits he earned with his new legal status.

“You know, I found out that paradise is here,” Alvarez said, pointing toward his little storefront window. He seemed to hint that his work, in addition to the world outside of it, is his paradise. In 2016, Alvarez underwent heart surgery and was told to take six months off from working. “I almost went crazy.” After about three days, Alvarez said he fired his entire staff and “started working day and night,” sleeping for hour-long increments behind the counter. Two weeks later, he re-hired the employees but continued taking shifts.

You go to Ray’s for the head-sized pistachio soft serve, or maybe the beignets, or the fries — but you stay for the stories. You may listen in astonishment, you may consider him brave. But Alvarez is likely to shake his head in humility, as he did in this interview. “I’m not all that good,” he said. “I have a short temper, when things don’t go my way I go crazy. But I’m learning — I learn from my mistakes.”

He quickly changed the subject, plucking a pile of ratty, torn pages out from underneath the counter. They’re from an old book of poems by Omar Khayyám, a philosopher whose work dates back to the Middle Ages. He read several aloud, first in Persian, then translating them to English. He closed with the one below:

“This is life eternal. This is all that youth will give you. It is the season for wine, roses and drunken friends. Be happy for this moment. This moment is your life.”

Then Alvarez took an empty coffee pot to the back to wash and refill.