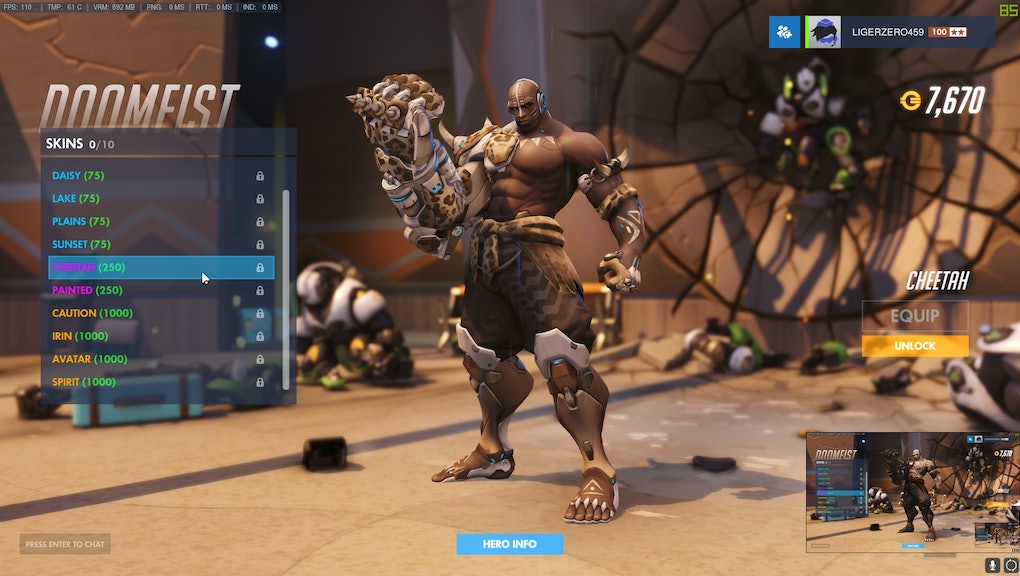 Update: Blizzard has updated the name of Doomfist’s “Cheetah” skin to “Leopard,” according to Reddit user johnnc2. The original story follows.

Blizzard clearly does a lot of research when it develops a new Overwatch hero like Doomfist — still, sometimes little details just slip through the cracks.

Case in point: The new hero Doomfist has a skin called “Cheetah” on the public test realm, but Reddit user birdmachine noticed Blizzard seems to have mixed up the names of the world’s big cats and their respective fur patterns. And, unfortunately, this isn’t the first time Blizzard has made a mistake that could’ve been fixed with just a hair more research.

And here is an image of an actual cheetah:

Notice anything different about the two patterns? See, Doomfist’s skin actually depicts a leopard’s fur pattern, which is much more intricate-looking when compared to the relatively simple black spots of a cheetah. Leopards look like this:

Blizzard’s not alone in making this mistake, though. If you do a quick Google search for “cheetah print,” you’ll actually find rows and rows of almost exclusively leopard print.

In all likelihood, a Blizzard artist just did an internet search for “cheetah print” and went from there, not actually verifying what they were looking at.

Overwatch lead writer Michael Chu weighed in on the official forums, saying, “But he’s got the fist that goes crunch!” — a reference to the Cheetos slogan, “Cheese that goes crunch.”

It’s not clear whether he was asking for forgiveness for the cheetah-leopard mix-up or his regrettable pun.

Regardless, this isn’t the first time an error like this has crept into Overwatch, interestingly enough.

The Overwatch Dorado map, which takes place in Mexico, is mistakenly based on a city in Italy

At the DICE Summit for game developers earlier in 2017, Overwatch director Jeff Kaplan admitted a similar Google mistake led Blizzard’s designers to base the Dorado map — which is located in Mexico — on an entirely different country.

“Being the utmost, top researchers in the industry, we went to Google Images and typed in — this is literally like, you can type this in right now on your phone if you want — ‘colorful Mexican town’ is what we typed in,” Kaplan said, according to GameSpot. “And we weren’t even looking at the pictures; we were just looking at the thumbnails pictures. And we were like, ‘This is it; this is perfect. It’s so awesome. This is exactly the version of Mexico that we want to build.’”

It wasn’t until later they realized they had actually been looking at a picture of the Italian town Manarola.

According to GameSpot, Kaplan cited Blizzard’s Mexico-Italy mix-up as a prime example of “a point he made throughout [his speech at DICE,] which is that Overwatch ‘is not about the reality of what the planet is. Overwatch is much more about what we hope the world would sort of be.’”

I don’t know about you, but I’d like to live in a future where we all know how to use Google properly. At least this time around, the fix is pretty simple.