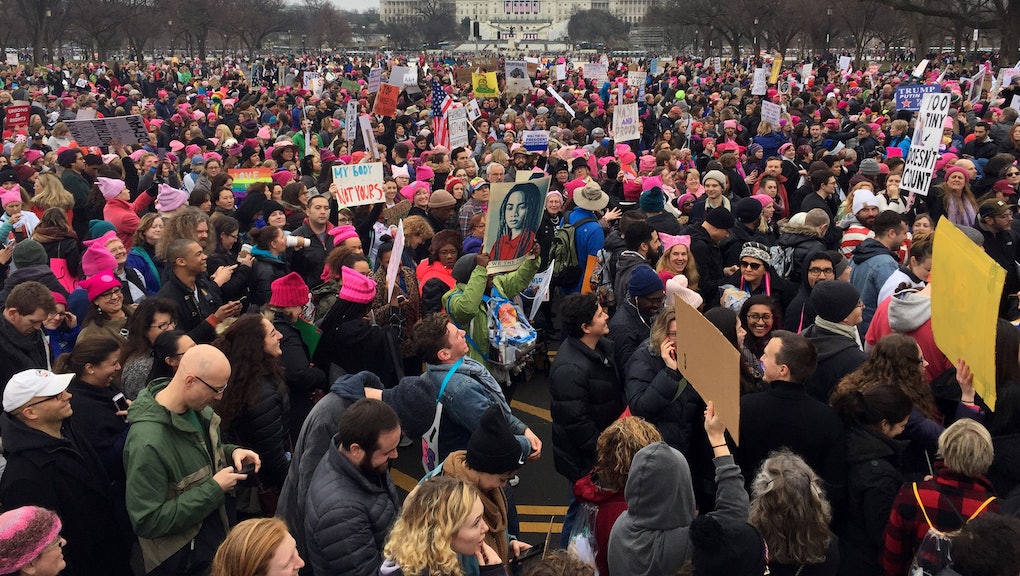 The Women’s March: Taking on the NRA is key to the anti-Trump movement

Tamika Mallory came away from the National Rifle Association’s recent call-to-action ad — condemning protests and calling for members to fight liberal opposition “with the clenched fist of truth” — with a jarring, emotional feeling. The Women’s March co-founder saw that the NRA was peddling fear to rile up its base, but this time, the attack felt personal — like a threat. “We are being targeted,” Mallory said.

“As you enter a summer of resistance, when people are planning marches ... the NRA’s propaganda and that ad is very dangerous for people standing up for many issues,” Mallory said in an interview. “When a powerful entity tells their members to take up arms against protesters, that’s definitely a threat to our communities.”

The NRA said their ad does not promote violence. That response has not deterred the Women’s March from using the video to launch a protest this weekend to challenge the NRA on its own turf.

On Friday, the Women’s March will lead a coalition of groups in a rally and 18-mile march beginning outside the NRA’s headquarters in Fairfax, Virginia. On Saturday, a vigil and rally will be held at the Department of Justice in Washington, D.C. Since more than 3 million people turned out for Women’s Marches across the country in January, the group has continued to broadly oppose President Donald Trump and his agenda.

But this protest, challenging perhaps the most powerful conservative special interest group, signals a major shift for the Women’s March.

“There is a big difference between having a moment in history and building a movement,” Mallory said of the importance of Friday’s protest. The action is not exclusively about pushing gun control policies. It also ties in criticism of Trump’s Justice Department and broader issues of violence. But the protest was catalyzed by, and is focused on, the NRA.

“I’ve never ever believed that the NRA is more powerful than the people,” Mallory said. “As long as people of good moral conscience come together ... I believe we will be victorious.”

The NRA was the largest outside donor to Trump’s campaign. That means the Women’s March, Everytown for Gun Safety and other groups participating in the protest are not only taking on the NRA, but the political establishment, providing an opportunity for the movement to demonstrate the scope of its influence.

“We are being targeted and this is our response.”

The NRA has stymied gun control legislation at the federal level for years, suppressing any major reform since the Assault Weapons Ban lapsed in 2004. In 2016, the group focused 96% of its vast political spending on supporting Trump and six Republicans in competitive Senate races, according to OpenSecrets. Trump and five of those senators won.

The power of the NRA goes deeper than its lobbying and political contributions. The organization is secretive about the size of its membership, but data disclosed in early 2016 showed members drove $128 million in 2014 revenue — a 27% drop from the year before.

Whether current NRA membership numbers are on the decline is unknown. But Shannon Watts, founder of Moms Demand Action for Gun Sense in America, said with former President Barack Obama no longer in the White House, the NRA must use fear to stay relevant and drive gun sales.

“The NRA is desperate,” Watts said in an interview. “When they don’t have a president for gun owners to be afraid of, they have to make you afraid of your fellow Americans.”

The Women’s March quickly said the NRA ad was an “endorsement of violence” against people who protest. The Women’s March featured its response to the NRA on its website, singling out an organization in a way it has targeted no other.

That led to partnerships of opposition to the NRA with groups like One Billion Rising, which aims to end violence against women, Million Hoodies, a group focused on training young black people to end racism, gun safety groups and other progressive causes.

“It is a really important inflection point,” Lizzie Ulmer, a spokeswoman for Everytown for Gun Safety, said of the Women’s March joining her movement’s fight for gun safety. “This is a new [political] environment. It’s another moment, just like in January, where different issues are coming together to take on a pretty big opponent.”

Everytown has experienced victories at the state level in the past year, but continues to face opposition in Congress. Ulmer said this protest builds on Everytown’s work over the past five years to pressure lawmakers to support gun violence prevention — just as the NRA pressures politicians to oppose it.

The Women’s March had no specific estimates for attendance, but an RSVP page lists a goal of 800 marchers. A crowdfunding page shows nearly $90,000 has been raised to support the event.

Another focus of the march is the recent acquittal of the police officer who shot and killed Philando Castile during a July 2016 traffic stop in Minnesota. Castile, an African-American, was carrying a gun he owned legally when he was killed by Jeronimo Yanez, and the failure of the NRA to defend Castille and his right to own a gun prompted the Women’s March to accuse the organization of showing “a disregard for the lives of black and brown people in America.”

“The NRA claims to stand for the Second Amendment rights of all Americans, but their silence on Mr. Castile’s constitutional right to own a gun betrayed a deep hypocrisy that many joined in calling out,” the statement reads.

Mallory said it was this pressure from the Women’s March that forced Dana Loesch, the conservative talk show host who appeared in the controversial NRA ad, to respond to the acquittal. “Do I believe that Philando Castile deserved to lose his life over a [traffic] stop?” Loesch said on CNN. “I absolutely do not.”

“We forced the NRA to speak on something that we know they were definitely trying to avoid,” Mallory said. “As we continue to put pressure on them ... we will begin to see that we can push them to the margins.