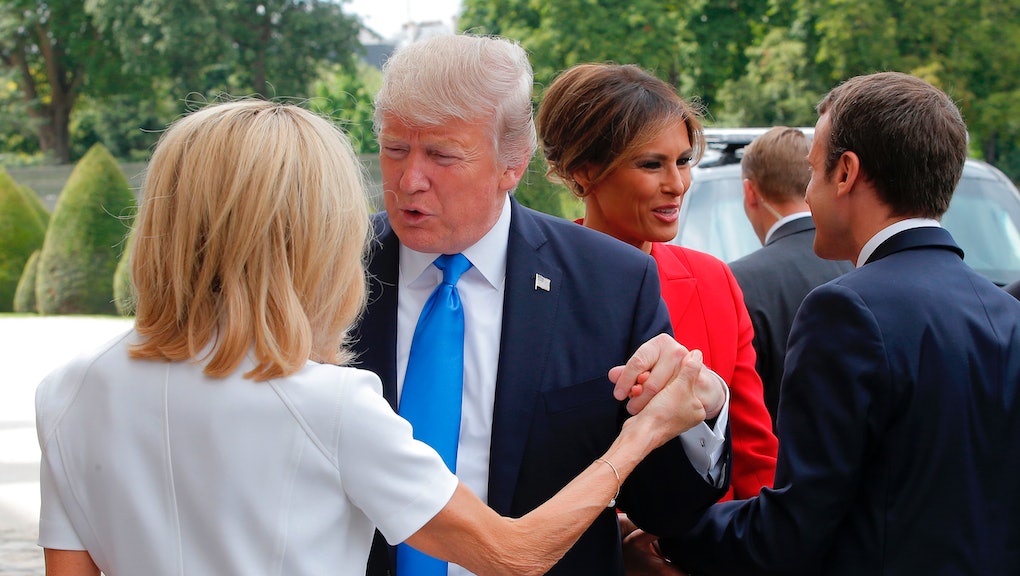 President Donald Trump, a man with a documented habit of harassing female acquaintances, met with Brigitte Trogneux, wife of French President Emmanuel Macron, for a second time on Tuesday, as world leaders do.

But being president didn’t seem to stop Trump from making an inappropriate comment about the French first lady’s figure.

First lady Melania Trump is along on the Paris visit, a celebration of Bastille Day on July 14.

The first time the first families met, Trump and Macron shared a conspicuously long, white-knuckled handshake that read as a battle of wills, potentially symbolic of changing relations between their two countries. That viral moment may have been eclipsed by Thursday’s Trump-Trogneaux handshake, which internet commentators were quick to deem the president’s most awkward yet.

While Trump’s apparent inability to keep his opinions on women’s looks to himself seems to be evergreen, it’s certainly inappropriate — especially in the context of a professional meeting. One might think that the president would have learned his lesson on this one, considering the number of times his comments have come under scrutiny.

Between the pussy-grabbing tapes, the avalanche of testimony that followed thereafter, from women who said Trump had sexually harassed or assaulted them or even two weeks ago, when he tweeted criticism of MSNBC anchor Mika Brzezinski’s alleged facelift — one would hope the intense pushback engendered by these outbursts would nudge Trump to think before he speaks. But judging from his latest interaction with Trogneaux, one would be wrong.