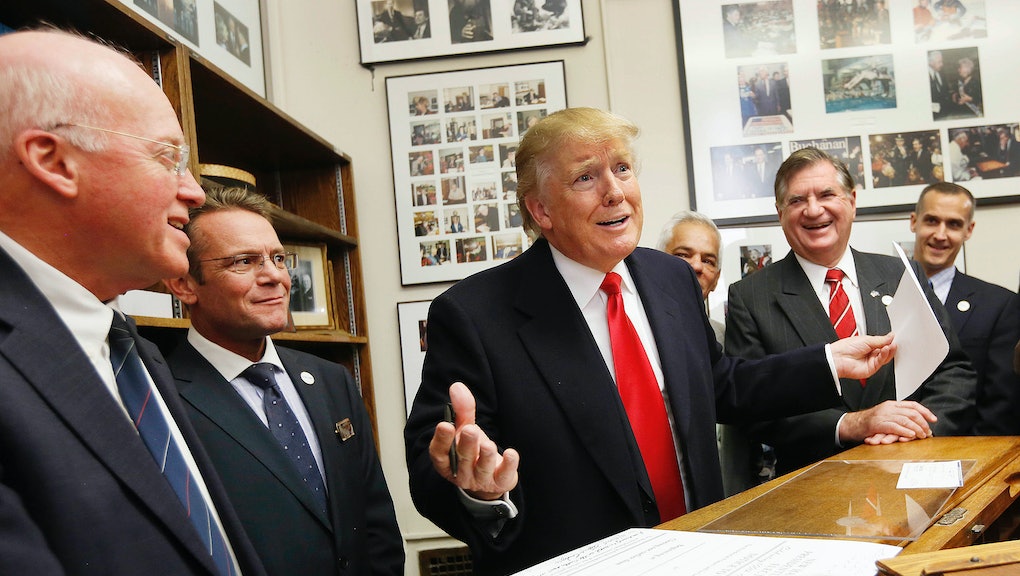 Kentucky secretary of state on voter data request: “Might as well let Putin just get a zip drive”

President Donald Trump’s “very distinguished voter fraud panel” is set to meet in Washington for the first time next week, and the rhetoric surrounding its mission is getting hotter than, well, Washington in July.

A monumental request from Trump’s Commission on Election Integrity for data on every registered voter in the 50 states is generating mounting blowback, including from many of the public officials who were asked to hand it over.

Among them: Kentucky Secretary of State Alison Lundergan Grimes, who told Mic in a phone interview this week, “It sounds like the commission which has gotten off on the completely wrong foot in requesting the wrong information when it comes to elections is in damage control.”

Democrat Grimes, the nation’s youngest secretary of state at age 38, has said the data request from the vice chairman of the Trump panel, Kansas Secretary of State Kris Kobach, has stoked fears that voter data as sensitive as partial Social Security numbers could be centralized and then fall prey to hackers.

“This is a coordinated attempt to create a national voter registration file that would reside in the White House. It’s akin to basically telling a robber, ‘Here’s the keys to my house and here’s where my jewelry is located,’” Grimes said in a phone interview.

“We might as well let [Russian President Vladimir] Putin just get a zip drive of every registered voter’s information in the nation,” she scoffed amid the ongoing federal investigation of whether foreign agents sought to tip the scales in the 2016 race for the White House.

Grimes was among those who gathered in Indianapolis for the recent National Secretaries of State summer meeting.

Kobach, a Republican who is also running for governor in Kansas, didn’t show up for that convention for unspecified reasons. His critics have not only gone after his request for detailed voter data but alleged that his real endgame isn’t stomping out fraud, but amending the 1993 “motor-voter” law to make it harder for people to register to vote.

In his absence, Kobach’s counterparts approved a resolution that opened with a reference to his sweeping data request — and pointedly asserted that states, not the federal government, run elections. It emphasized the secretaries’ commitment to strengthening election cybersecurity and processes” while also “increasing voter participation.”

Grimes said the unanimous pledge, one of several adopted at the Indiana NASS meeting, sent “a very strong message” about the Kobach request — namely that it “has been received [as] about as welcome as a breeze off an outhouse.”

For the time being, thanks to at least one of several legal challenges targeting the panel, states have been asked to hold off on forwarding any voter data.

The ACLU and Lawyers’ Committee for Civil Rights Under Law, among other organizations, have filed multiple complaints questioning the integrity panel’s operations.

The Electronic Privacy Information Center, whose challenge led the panel to put the brakes on data collection, said in a web update Wednesday that it has filed new Freedom of Information Act requests regarding data on voters registered in Arkansas.

“In a hearing in federal court on July 7, the Department of Justice revealed that Arkansas had transferred voter histories to the commission, contradicting a July 5 statement by vice chair Kobach that no such transfers had occurred,” EPIC explained.

A spokeswoman for Kobach did not respond to a Thursday request for comment. There was no immediate response from the office of Vice President Mike Pence, the chairman of the federal panel.

It wasn’t all radio silence, though.

The Public Interest Legal Foundation, which is headed by new voting panel member J. Christian Adams, took to Twitter to confront critics for trying to obstruct the Trump commission’s work.

The piece pointed out that both EPIC and the ACLU have received funding from a foundation run by longtime right-wing punching bag George Soros.

PILF also cheered the latest developments in a case involving “bloated” voter rolls in Broward County, Florida, saying in a statement on its website that, “The Court recognized that despite the County’s assurances to the contrary, one cannot dismiss the fact that Broward has more registered voters than resident citizens.”

On Thursday, the White House posted notice of the upcoming July 19 panel meeting, along with an email address that members of the public can use to submit comments.

The White House webpage for the commission also includes links to a copy of Kobach’s original June 28 letter requesting state voter data, a collection of government officials’ responses to that request and 112 pages of written comments submitted by members of the public in advance of the meeting.