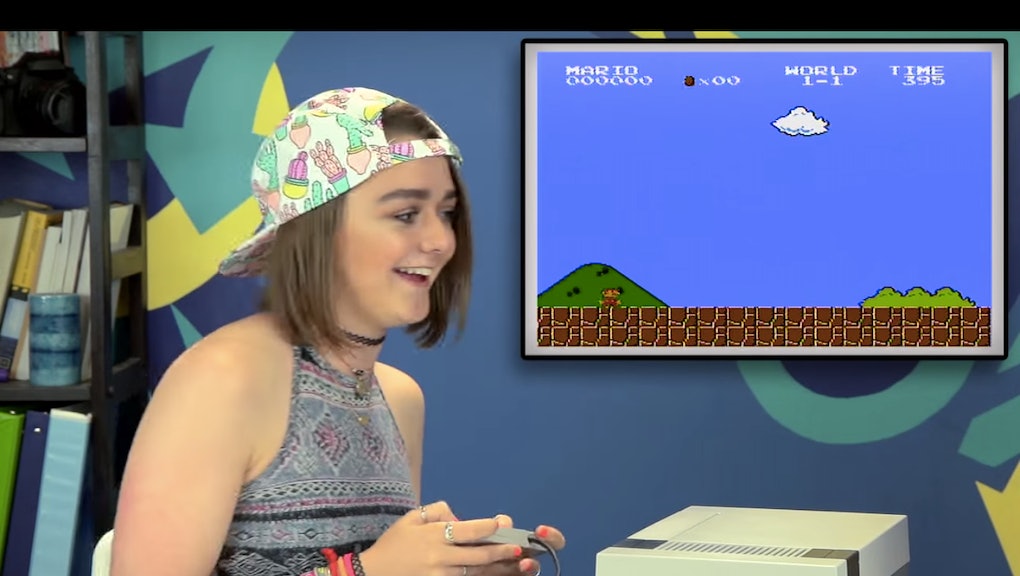 With Game of Thrones returning Sunday, winter is nearly here. But when it’s not wartime in Westeros, you can find Arya Stark in a snapback behind an NES controller.

Three years ago, the Teens React YouTube series blessed us with this footage of teenagers playing the original Nintendo Entertainment System from 1985 — not to be confused with 2016’s NES Classic.

While Arya Stark can best opponents in a sword fight while blind, Maisie Williams has less luck conquering the beast of a console that is the NES. Though at least she is able to beat World 1-1 of Super Mario Bros., unlike that one kid.

Looking back, there’s a lot to laugh at about the original NES: The graphics are basic, the game cartridges’ physical size is laughable and the controller is pretty damn uncomfortable (it’s literally a block with buttons). But here we are, in 2017, still talking about. The VCR-sized box somehow still works, and the games are ancient but fun. They even made Nintendo a truckload of cash last holiday season.

Arya Stark has shown she can handle Super Mario Bros. and avoid death in Game of Thrones. Though let’s see her successfully put in an SNES Classic preorder; then we’ll really be impressed.

Looking for more Nintendo Switch news? Check out how blind gamers are using the Nintendo Switch and why you can’t get your Mii to look quite like you. Nintendo’s left Joy-Con issue turns out to be a hardware problem — here’s how to solve it. Find out how to buy a console amid the recent restock. Learn why the Switch cartridges taste so bad. Check out our comparison photos sizing up the Switch to the Wii U GamePad (part one and part two), or find out how to make use of ethernet without the dock and the best way to get alerts when new stock arrives.