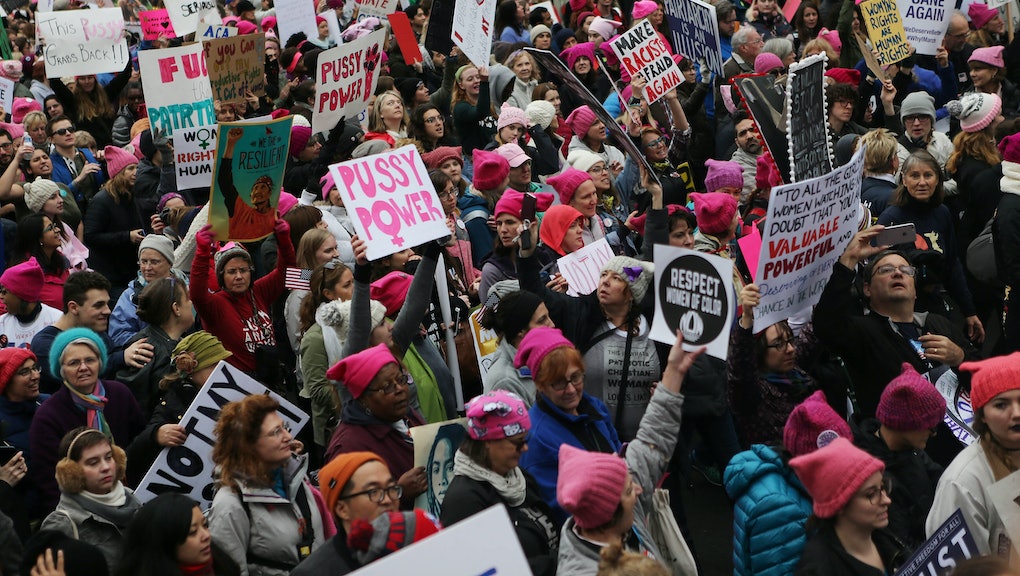 Imani Mitchell didn’t go to January’s women’s marches, but when she watched YouTube videos of the one held in Sacramento, California, she noticed something striking: overwhelming whiteness. And she wanted to do something about it.

A month later, Mitchell and a group of other black women formed Black Women United, a Sacramento-based nonprofit dedicated to the “education, protection and advancement of black women.” On Saturday, the organization, of which Mitchell is now president, will hold its first big event: “‘Ain’t I a Woman’: The Black Women’s March and Rally.”

“I think in many ways we are a response to the Women’s March back in January,” Mitchell said in a phone interview Thursday. “By no means are we in opposition to the march — we’re definitely in addition to it. We just want to continue the conversation and focus on black women.”

Mitchell said she was particularly moved by many of the pieces penned by black women explaining why they wouldn’t, or didn’t, attend the Women’s March on Washington. Even more eye-opening, she said, were the responses to those pieces, which involved a number of white women accusing black women who critiqued the march of “hijacking” and “dividing” the effort.

“Those responses really illuminate the issue at hand,” Mitchell said. “When we speak out about being excluded from the conversation and you say, ‘Don’t you dare rain on our parade,’ you’re telling us to just keep going and act like everything is OK.”

The “act like everything is OK” message is particularly damaging to black women, who Autumn Jackson, BWU’s director of social and community outreach, noted are constantly asked to put their womanhood before their blackness, or to make an impossible choice between the two.

“We can’t separate our womanhood from our blackness,” she said Thursday. “There’s a form of erasure that happens when you don’t acknowledge black women’s specific issues. And erasure is a euphemism for lying, frankly. You’re not telling the story of women if you’re only focused on white women.”

This point is embedded in BWU’s march, which gets its name from Sojourner Truth’s famous “Ain’t I a Woman” speech. Truth, a former slave, made the speech in 1851 at a convention in Akron, Ohio, where women had been demanding the right to vote.

“That man over there says that women need to be helped into carriages, and lifted over ditches, and to have the best place everywhere,” Truth said at the time. “Nobody ever helps me into carriages, or over mud-puddles, or gives me any best place! And ain’t I a woman?”

The speech was an indictment of anyone who would diminish or dismiss black women’s womanhood, especially the white women who are complicit in it.

Mitchell said by turning out in droves to January’s women’s marches — as important and powerful as they were — white women exposed themselves as only caring about threats to their own rights and interests. When BWU began spreading the word about its own march, Mitchell said she was baffled when white and nonblack people of color came down on her for creating an event that was only meant for black women.

“These are the same people who don’t show up at protests outside a school when another black girl was expelled for having her hair in an afro or braids,” Mitchell said. “Now that all of a sudden we have a platform, we also seem to have a responsibility to carry everyone on our shoulders.”

But even in the face of these demands, Mitchell, Jackson and the other BWU organizers are determined to turn Saturday’s march into a site of black joy.

Mitchell said BWU is trying to create an environment that’s safe, celebratory and, most of all, intersectional in the truest sense of the word. For Mitchell, that means not asking anyone to put their sexuality, religion or gender identity second to their race.

“We want everyone to unite and feel empowered and celebrate, but I don’t want anyone to feel like, ‘I left this march and I didn’t get to be who I am,’” Mitchell said. “We want you to be who you are with everyone else being who they are in this space, and to be sisters with each other.”