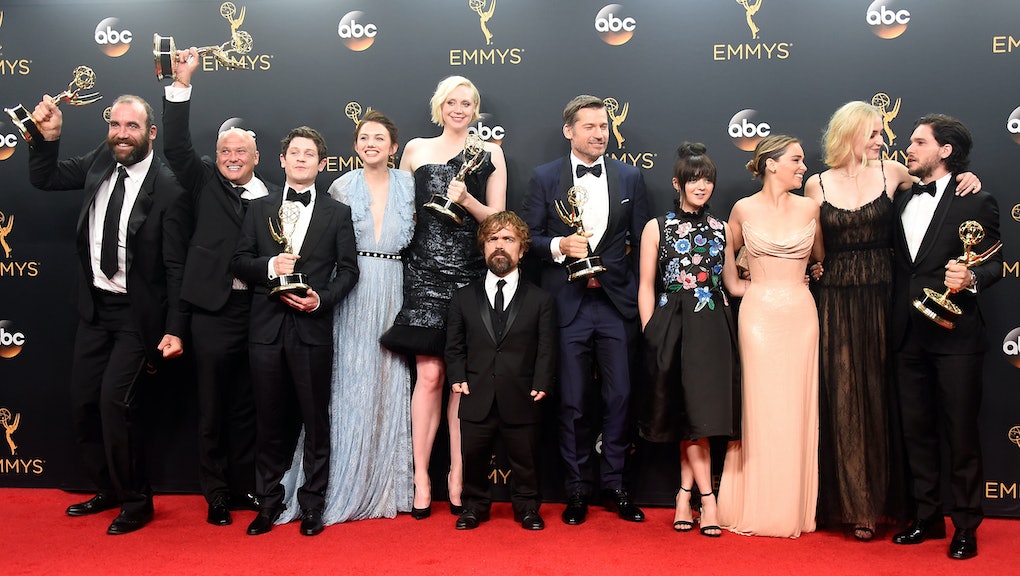 Which show will win the best drama Emmy for 2017 while ‘Game of Thrones’ sits out?

As the dust settles on the 2017 Emmy nominees, we’re left with some questions. Will Julia Louis-Dreyfus ever lose the prize for best lead actress in a comedy series? Can RuPaul’s Drag Race win and shake up the reality competition race? But the most puzzling question of all has less to do with what’s nominated and more to do with what isn’t: What will take Game of Thrones’ spot as the frontrunner in the outstanding drama series race?

HBO’s Westeros-based blockbuster series has won the best drama Emmy for the past two years. But a filming delay to shoot season seven in winter forced Game of Thrones to sit out the awards cycle this year. Because every show that’s won the top drama award this decade is either off the air (Mad Men, Breaking Bad) or not nominated this year (Homeland), we’re left with a wide-open race.

In honor of the Emmys’ most exciting jump-ball category, let’s examine the race as it currently stands. We’ve got seven nominees, two repeating from previous years and five nominated for their first seasons. Which show will rule in Game of Thrones’ absence? We’ll start with the least likely winner and work our way up to the top of the class:

Why it was nominated: Last summer, Stranger Things became a veritable phenomenon. The ’80s throwback Netflix series captured the interest, imaginations and, with the help of the Stranger Things Kids, hearts of many. While shows like The Handmaid’s Tale and Better Call Saul are critical favorites, Stranger Things benefits from being beloved by a big audience, too.

Why it could win: Not only is it a sentimental favorite, but Stranger Things also won big at the Screen Actors Guild Awards earlier this year.

Why it won’t win: Unfortunately, Stranger Things came out the earliest of all of the nominees, and won’t air a new season before the Emmys to refresh the Television Academy’s collective memory. They’re relying on voters to remember, in specific detail, eight episodes that they watched a year ago. Considering just how much TV there is, that’s a bad gamble.

Why it was nominated: House of Cards is probably going to be nominated every season until it goes off the air. It’s a stalwart in this category, despite never winning, and racks up acting nominations every year. The quality of the season in question seems to matter relatively little; it’s just a lock to recur.

Why it could win: Well, it keeps getting nominated for a reason. Voters are clearly familiar, and if the wave of new entries in this category overwhelms them, they could go with a known entity.

Why it won’t win: House of Cards is to this category what Modern Family is to the outstanding comedy series category at this point: a past-its-prime series that will always be present, but is no longer viable to win the top prize. It’s really hard to fathom it taking the trophy home.

Why it was nominated: Like Breaking Bad before it, AMC’s spinoff series has been an Emmys favorite, earning nominations for the show itself and star Bob Odenkirk every year it’s been eligible. After a season that many (including Mic’s Miles Surrey) named among the best in 2017 TV, it was likely an easy inclusion for voters.

Why it could win: Breaking Bad won; why can’t Better Call Saul? After such a strong season, and with Game of Thrones no longer in the mix, this would seem to be the time to reward it.

Why it won’t win: Rightfully or not, there’s some degree of also-ran status attached to Better Call Saul because it’s a spinoff. Spinoffs have been nominated for and won Emmys before — Boston Legal, an Emmy favorite, sprung from creator David E. Kelley’s previous series, The Practice. But with so many other new, fresh series in the race, Better Call Saul has seemingly already been relegated to bridesmaid position after just three seasons.

Why it was nominated: If Stranger Things was the phenomenon of the summer, Westworld was the same for the fall. The show quickly positioned itself as the successor to Game of Thrones as HBO’s buzziest show, inspiring fan theories and slavish attention to detail.

Why it could win: Westworld racked up a gargantuan 22 nominations, tying Saturday Night Live as the most nominated program of the year. That means it’s beloved across different branches of the academy, including the technical category voters, actors and producers. That kind of awareness across multiple voting blocs can only serve it well.

Why it may not win: This is vague, I realize, but Westworld doesn’t really feel like a best drama winner. Sci-fi has never done well with the Television Academy in its top branches, even as they’ve become more amenable to fantasy, rewarding Game of Thrones. (Remember that it took them five seasons to finally give HBO’s biggest drama the top prize.) The widespread love is an encouraging sign, but I feel like it’s not quite Westworld’s time.

Why it was nominated: “Expensive costume drama about Queen Elizabeth” is about as awards bait-y as it gets. Netflix took an expensive gamble here, but it paid off, with The Crown earning kudos for its first season. Considering it’s a fairly quiet show, there was a chance voters could forget it. Clearly, though, the glamour and drama of this period piece made its mark.

Why it could win: It’s entirely possible I’m underrating The Crown here. The show triumphed at the Golden Globes, and like I said, the premise is basically designed to win hardware. Suffice it to say, I would not be shocked in the slightest if it pulled out the win in September.

Why it may not win: Confession: I have not seen The Crown. It’s not for a lack of trying. Every time I want to start, I think of anything else I could be doing. It’s not that a costume drama doesn’t appeal to me, it’s that the episodes are long, I’ve heard it’s a fairly slow show, and hey, Hulu has every season of The Real Housewives of Atlanta, so why don’t I go ahead and start a rewatch?

Point being: If Emmy voters are as easily distracted as I am, they may not make the time for it over the more attention-grabbing shows on the list.

Why it was nominated: A critical favorite that doubles as Hulu’s most popular original program ever, The Handmaid’s Tale was a pretty clear lock for a nomination. The Elisabeth Moss-starring adaptation of Margaret Atwood’s 1985 dystopian novel is truly a show for this moment in time. The quality was high all throughout its 10-episode first season, and the performances were astonishing across the ensemble.

Why it might win: If Emmy voters are ready to open their hearts to a Hulu series, they can’t do much better than this one. Handmaid’s Tale has been a buzzy success — not a sensation at a Stranger Things or Westworld level, but big enough to stay in the cultural conversation. Some more liberal voters might also not be able to resist the chance to make a sweeping statement against the current administration, considering the terrifying parallels between it and the fictional, oppressive Republic of Gilead.

Why it may not win: Really, the only way it’s losing is if there’s a bias against Hulu, or voters are more squeamish about political statements than members of the Academy of Motion Picture Arts and Sciences were this year.

Why it was nominated: This Is Us was the breakout hit of the fall TV season. Its multigenerational story about one family over the course of several decades has resonated with audiences. This Is Us tears have become a national inside joke. It’s a heartwarming favorite, with the audience to back it up.

Why it will probably win: I think This Is Us has it in the bag. Since 2007, as the Daily Beast’s Kevin Fallon pointed out on Twitter, only six network dramas (not cable or streaming) have been nominated for this prize. The Good Wife, House, Friday Night Lights and Boston Legal never won, and Lost only won in 2005, when it was easier for network shows to do so.

This Is Us is a major hit for NBC. It may not capture critical attention the same way that Westworld or Handmaid’s Tale does, but it resonates with people. (Anecdotally, I cannot tell you how often conversations about TV with people who don’t work in the media turn to This Is Us. My attempts to get them to watch Dear White People fall on mostly deaf ears.) If voters want to recognize a network show that has managed to get people tuning in and talking, instead of a streaming show that has a more limited audience, they can — and they likely will.

The only reason it might not win: This Is Us is not a great show. I speak as someone who found the first half of the season remarkably deep considering what I’d heard about it. It’s just not at the level it needs to be yet to really deserve this prize. It could get there, and will have two more chances to do so. But from a qualitative standpoint, its first season simply isn’t up to snuff — not when there are more ambitious, impressive shows in this category.