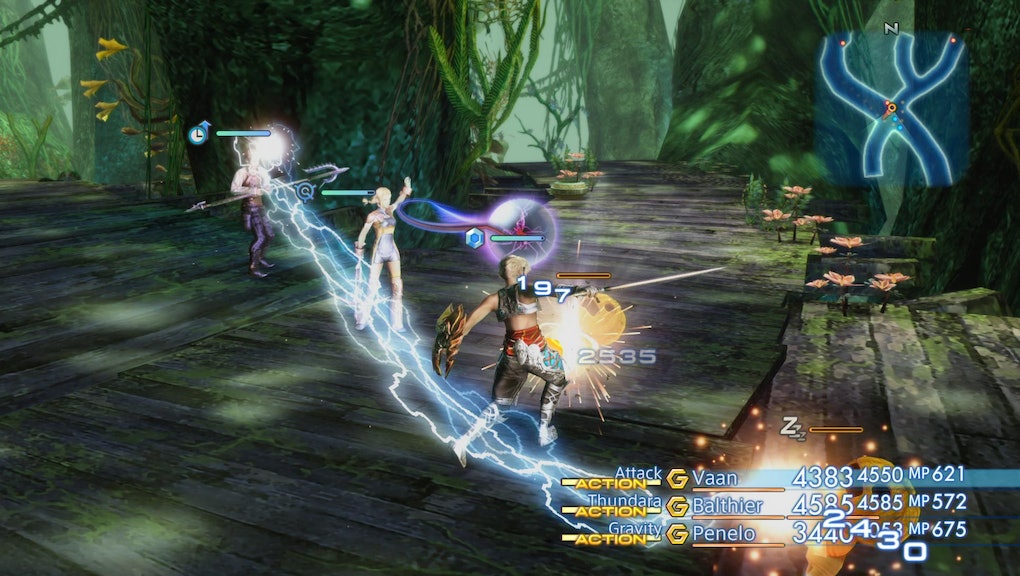 You’d be forgiven for having missed Final Fantasy XII when it launched on the PlayStation 2 in late 2006. It came out almost a year after the Xbox 360 came out and not long before the PlayStation 3 and Wii launched, so plenty of people were preoccupied with shiny new game machines. Why play a PS2 game when you can experience eye-popping HD visuals or novel motion controls?

It was also divisive, at least among my friends who like Final Fantasy. The combat isn’t turn-based? Is this even a Final Fantasy game?

Whether you missed the original or just want to revisit the game, the PS4-exclusive, souped-up HD remaster, Final Fantasy XII: The Zodiac Age, is the ultimate way to do so. Just go in knowing that the game isn’t perfect.

The most radical change Final Fantasy XII made to established series conventions was its combat system. Gone was the turn-based system that had existed in many forms in previous games. It was replaced by a real-time system based on issuing commands, managing action bars and programming your party’s AI to make things easier on yourself.

Combat in FF12 is a bit like managing your own MMO party. You control one character and can issue commands to two others, but ideally, you won’t have to because you’ve taken advantage of the gambit system. Gambits are commands you can program on a per-character basis, with additional commands and slots opening up throughout the game. For example, you can tell your healer to automatically cast Cura when the party leader’s health is below 30%, or tell your black mage to cast Blizzard if an enemy is weak to ice. They’ll do these things automatically as long as those gambits are set.

If that sounds complicated, wait until you hear about character customization. In the original version of Final Fantasy XII, every character could be upgraded on a chess-like “License Board.” There was one enormous board and it was shared across all characters, so everyone had access to the same abilities. It was clumsy and intimidating, which is why this version of the game uses the streamlined International Zodiac Job System from the Japan-only International Edition of the game that came later.

With the IZJS system, there are a bunch of smaller, separate License Boards for each class. When a character is added to your party, you get to choose their class, giving you a ton of latitude in deciding how your party functions. Any character can be any class, so you’re not pigeon-holed into using a character you hate just because they’re useful in combat. Eventually, you can assign multiple jobs to a character, meaning your tanking Knight can also get access to the White Mage’s lineup of healing spells.

Having played some of the original Final Fantasy XII, this is a huge improvement over the original upgrade system. I love being able to build a party based on the characters I like the most, not on the abilities the game decided they would have. My one complaint is the game could do a better job of holding your hand at the beginning. For example, it could recommend a sensible party lineup or a good direction to go on the License Board for players who might not be familiar with the tank/DPS/healer MMO trichotomy.

The game’s narrative is also a bit different from what the series had become at that point. Rather than the melodramatic love stories of Final Fantasy VIII or X, it’s a sweeping political drama that takes place in the Ivalice universe of Final Fantasy Tactics. War, imperialist occupation, regicide and senate squabbling are the themes of the day here. That’s not to say I dislike the other approach; I was a big fan of the Tidus and Yuna arc in FFX back in the day. It’s just good to do something different every once in a while.

Unfortunately, I haven’t gotten to see the story to its end yet because the mechanics and design aren’t always sound in Final Fantasy XII. I’ve been stuck on a particular boss fight for a few days because the large degree of customization the game afforded to me allowed me to create a party that steamrolled through everything else but is ill-suited to compete with this boss. It’s frustrating to get so hung up on one thing when it doesn’t really feel like it’s my fault.

According to my helpful Twitter followers, my best bet will be to go do a bunch of grindy sidequests and buy an optional accessory to make the fight manageable. Fun.

I like the combat on a grand scale, but it’s clear that it was never fully perfected. Characters sheathe and unsheathe their weapons of their own volition, which interrupts their action bars for some indiscernible reason. The gambit system is dependable about 90% of the time, but I’ve run into situations where characters are a little slow to do things they’ve been programmed to do. Lastly, managing threat (or aggro if you’re an MMO dork like me) is less intuitive than it could be.

I’ve really enjoyed most of my time with the game, but there are enough kinks in the way it works that it’s worth noting. The dungeon design is as tedious as you’d expect from a slightly older JRPG. Lastly, fast travel can only be performed from specific points using items you have to find or buy more of if you run out. That’s not a huge deal, but still, it’s a system that could have been modernized.

Final Fantasy XII: The Zodiac Age review: This is one hell of a remaster

Despite the handful of small complaints I have about Final Fantasy XII, this is the ultimate version of the game by several orders of magnitude. Aside from the visual spit-shine it’s been given, a number of small enhancements and modern conveniences have been added to make it a more pleasant experience than ever before.

If you press L1, the game runs in fast-forward, which is super useful and great for running across the large fields of Ivalice and fighting through hordes of weaker enemies. You can even choose whether it’s 2x or 4x speed. I’m not joking when I say this is perhaps the smartest addition I’ve seen in any HD remaster of an old game. Running across the world is occasionally a chore and Square Enix found a way to negate that.

The music has also been re-orchestrated, but you can choose between the new and old musical tracks in the options menu. Even though these are old assets and the textures are pretty grimy, Final Fantasy XII is a gorgeous game in HD. The character models animate fairly expressively for the time and spell effects in combat still look fantastic. As you’d expect from Final Fantasy, the art direction is top-notch, as well.

Final Fantasy XII The Zodiac Age is the version of this game to play if you’re at all interested in playing it. That might not sound like a ringing endorsement, but just about the best thing a remaster can do is make the original obsolete. I still have a few gripes with the combat and upgrade systems, but I’m glad Square Enix brought this game back into the spotlight.