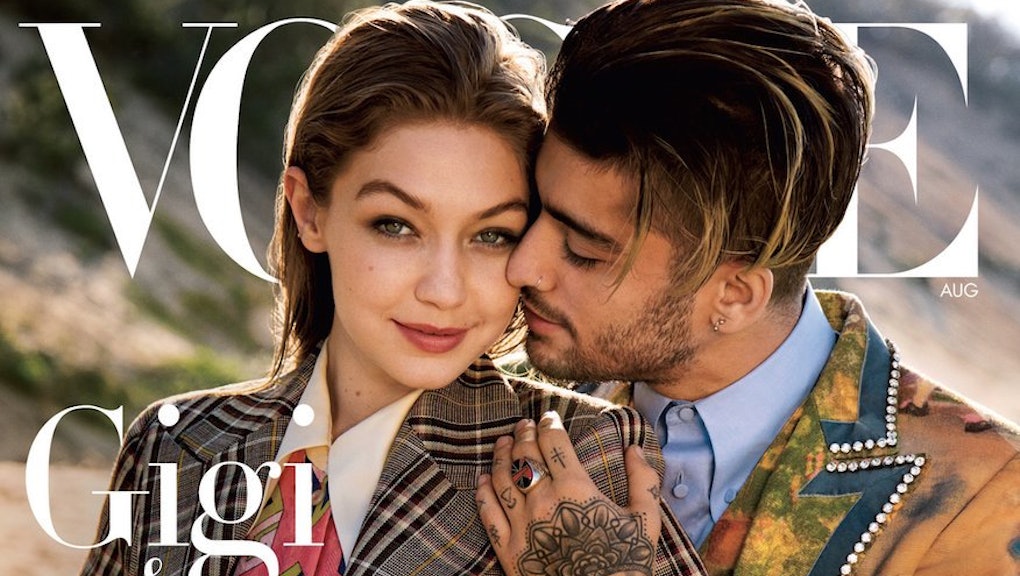 ‘Vogue’: Gigi Hadid and Zayn Malik are embracing gender fluidity. The internet: Not so fast.

Gigi Hadid and Zayn Malik are many things. They are celebrities. They are impossibly, unattainably attractive. They are new Vogue cover stars. But would you consider them, knowing them simply through social media, regular embracers of gender fluidity?

Vogue does, as exhibited by their new cover story, which bears the headline: “Gigi Hadid and Zayn Malik Are Part of a New Generation Embracing Gender Fluidity.”

On the cover and inside pictures, Hadid wears outfits typically associated with menswear, like suits and button-downs, while Mailk wears suits and coats in wild patterns from Gucci and Alexander McQueen.

In the story, Hadid and Malik reveal that they shop in one another’s closet. “I like that shirt. And if it’s tight on me, so what?” Malik asks in the interview. “It doesn’t matter if it was made for a girl.” Then Hadid chimes in: “Totally. It’s not about gender. It’s about, like, shapes. And what feels good on you that day. And anyway, it’s fun to experiment....”

And that — that “experimentation” — was enough for Vogue, apparently, to proudly announce them as part of a new generation embracing “gender fluidity.”

Gigi Hadid and Zayn Malik aren’t defining themselves as gender fluid. They are just swapping clothes with their opposite-sex partner sometimes. In reality, gender fluidity is when someone doesn’t identify as one single gender.

Playing dress-up with your partner and swapping clothes that really aren’t that crazy for the other one to wear (note: It’s not like Zayn’s wearing a dress or skirt for this article) doesn’t really feel like it qualifies as being gender-defining for either of these people.

This effort to try to include them in a conversation regarding gender and identity more or less feels like Vogue trying to cash in on something they think is a trend. But really, someone’s identity is never a trend.

In a Facebook post on Thursday, DuJour art director Alexander Wolf put it like this: “Talk about typical mainstream fashion magazine tone-deafness. ... There is nothing gender fluid about them or this photo shoot. Gender fluid because Gigi Hadid is wearing a sports jacket? If you want to make a statement about this very real issue and movement, then cast it appropriately.”

If Vogue wanted to talk about the gender conversation, then having two cisgender, straight people talk about swapping clothes probably wasn’t the best start.

In a statement from a Vogue spokesperson on Friday, the glossy formally apologized: “The story was intended to highlight the impact the gender-fluid, non-binary communities have had on fashion and culture. We are very sorry the story did not correctly reflect that spirit — we missed the mark. We do look forward to continuing the conversation with greater sensitivity.”