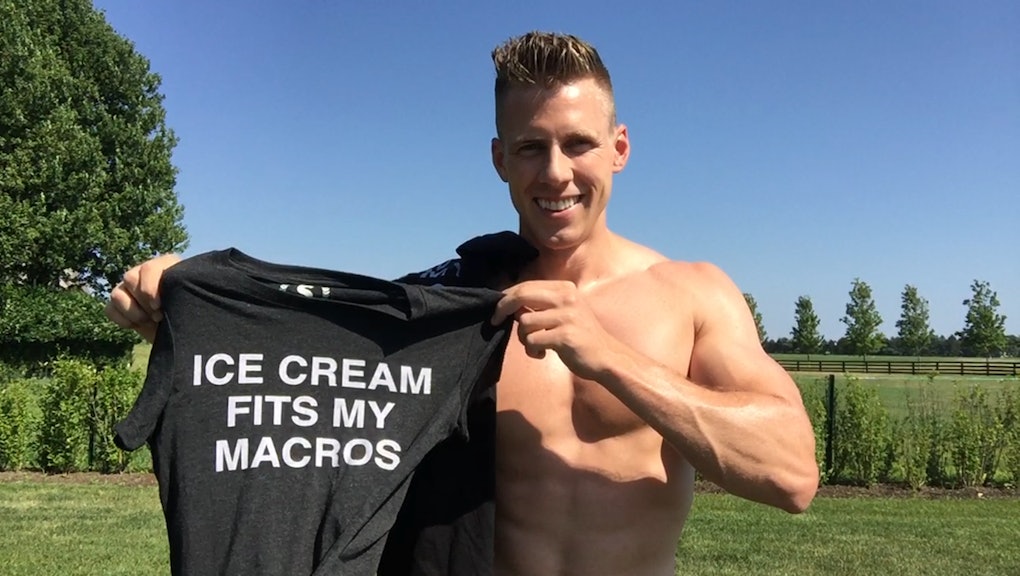 When was the last time you ate an entire pint of ice cream? Were you drowning heartache with some chocolate chip cookie dough? Did you power through a pint of Half Baked at the end of an alcohol-fueled evening? Perhaps you were in too deep with some mint chip and figured you may as well continue to dig until you reach the bottom of the carton. (Just me?)

For most of us, eating a pint of ice cream is an activity typically reserved for pity parties or moments of reckless abandon. But fitness trainer Mike Vacanti eats an entire pint of ice cream in one sitting, several times a week. He crushes his ice cream straight out of the pint, because really, it’d be wasteful to dirty a bowl.

“Because I am lean and muscular and walking around and in good shape, it’s a bit of an oxymoron,” he admitted in an interview, explaining that almost everyone is shocked to learn that he chows down on thousands of calories of dairy at night.

Vacanti has such a passion for ice cream that he sells shirts with the phrase “Ice cream fits my macros” on it. (“Macros” refer to macronutrients — protein, carbs and fat — which many fitness enthusiasts and athletes track to optimize athletic performance or diet.)

Your body on a pint of ice cream

A pint of ice cream usually contains four servings and more than 1,000 calories, which could equate to roughly 50% of a person’s daily caloric intake. (The USDA recommends that a sedentary man between the ages 25 and 30 consumes 2,400 calories per day.)

Dig into the ingredients and nutrition facts and you’ll learn that eating ice cream in moderation might not be as unhealthy as you’d expect. The fat in ice cream can slow the body’s digestion of sugar. Plus, it contains minerals including potassium, calcium and magnesium that help support healthy blood pressure.

But savoring such a large portion of ice cream has downsides, of course. A pint contains a megadose of carbs — typically over 100 grams. (In contrast, a one-cup serving of spaghetti has approximately 46 grams of carbs.) Though carbs provide the body with energy, they get stored as fat if they aren’t used right away, the nutrition site Eat This Not That explained. Medical experts are split on whether or not the saturated fat in dairy products can increase your risk for heart disease.

Vacanti emphasized that he’s able to eat large portions of ice cream because he exercises plenty and balances his ice cream with a relatively healthy diet.

“A caveat needs to be added, which is, I’m a male with a solid amount of muscle mass,” he said. “I lift weights three to four days a week, I’m walking roughly 12,000 steps around [New York City] each day, I’m boxing and I’m also paying attention to the rest of what I’m eating.”

The personal trainer said he doesn’t “obsessively track everything,” but rather has a general idea of how much protein, carbs and fats he consumes. He aims to eat around 4,000 to 4,500 calories a day to fuel his workouts. That may seem like a huge amount to desk job folks, but it’s modest compared to the 12,000 calories a day that Michael Phelps used to eat to support his Olympics training.

When athletes such as Vacanti (and Phelps) are working out vigorously, they need to replace the calories they’re burning off. If they don’t consume enough calories, their muscles will not recover, Mark Klion, a sports medicine expert and orthopedic surgeon at Mount Sinai Medical Center in New York, told the Wall Street Journal. Translation: Your body won’t perform optimally if you aren’t eating enough.

“This isn’t necessarily a one-size-fits-all philosophy,” Vacanti said, adding that he is maintaining his weight right now and not attempting to get leaner. He says that when he’s coaching clients who want to lose body fat, he recommends they allow themselves a sweet treat within reason because he knows from personal experience that too much restriction can backfire.

“There were definitely periods of my life in high school and in university when I over-restricted on dieting... it wasn’t sustainable. When I cut all sweets out for periods of time, it would always end in a binge of dessert foods eventually,” he said. He found that eating ice cream once a week helped him stay on track with his fitness goals.

Indulging in so-called unhealthy foods, like ice cream or cookies, can help some people stick with a diet plan, Vacanti said. But, “there are other personality types; if you said you can have two Oreos before bed, they would eat two Oreos and they would eat the rest of the bag,” he said. “It depends.”

But science supports the idea that a scoop of ice cream (or any treat) could help us keep up healthy habits. “Cheat days,” or days where a dieter (or anyone) plans to indulge, can help people maintain greater self-control in the long run, according to a 2016 study published in the Journal of Consumer Psychology. They’re like “mini-vacations from your self-control,” Olga Khazan, a science writer, wrote in the Atlantic.

Moral of the story? A cookie dough ice cream “mini-vacation” may be just what the body needs.