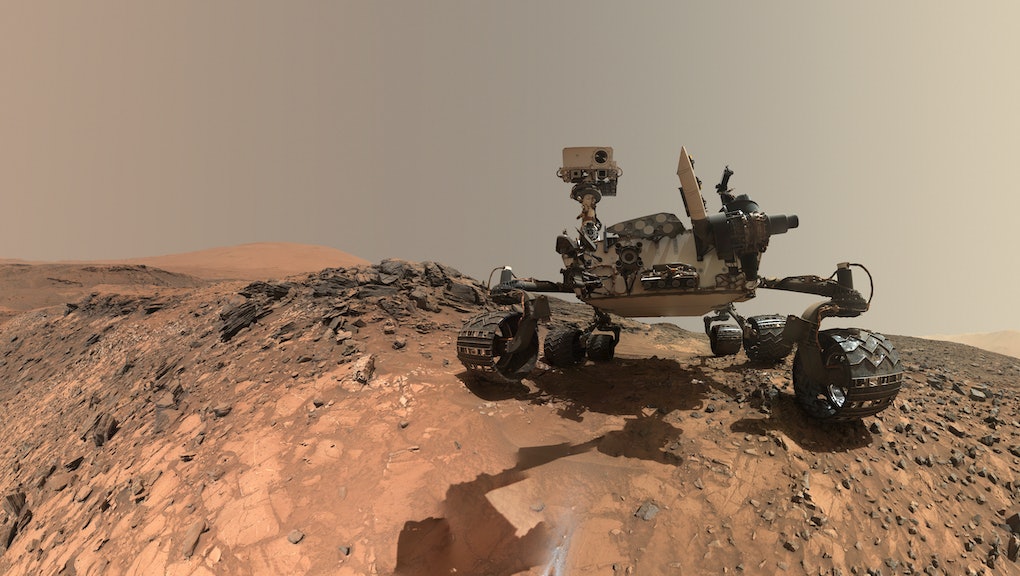 Humans have dreamed of setting foot on Mars for decades, and for the past few years NASA has been pushing its “Journey to Mars” campaign to do that sometime in the 2030s.

NASA has always been a little coy about the timeline for the later steps of reaching Mars, attaching year targets only to the earlier steps of the program.

That date is not getting any closer. On Wednesday, the agency’s associate administrator for human exploration, William Gerstenmaier, spoke to the American Institute of Aeronautics and Astronautics. Gerstenmaier was asked for a firm timeline for putting humans on Mars, since that would be powerful inspiration for people in the industry.

He responded, “Through this horizon, through the 2030s, I can’t put a date on humans on Mars. And the reason really is, the other piece is, at the budget levels we described, this roughly 2% increase [which covers inflation but doesn’t represent a real increase in buying power], we don’t have the surface systems available for Mars.”

NASA has always planned its Journey to Mars program with budget concerns in mind. Gerstenmaier also referenced this philosophy during his talk, discussing the strategic principles that guide the program’s work. The first one he mentioned was “fiscal realism.” “We don’t think we’re gonna get a huge big new budget, there’s not going to be a brand new major funding source coming to us,” Gerstenmaier said. “We’re going to live with basically the budgets we have now, commensurate with economic growth.” He concluded that discussion by saying, “We think that that’s an achievable program.”

NASA has an understanding of how federal budgets work. It never assumed Congress would shower it in money just because it decided to go to Mars.

Later in the question-and-answer period, Gerstenmaier talked about the logistics of budgeting. “We didn’t assume a big budget increase in any of this stuff I laid out for you. So it’s maybe not as inspiring as it could be if there was a bigger budget, but it’s what it is, and it’s also not susceptible to big changes that could occur in the budget.”

He described NASA’s planning process as resilient — if it gets a tight budget one year, that won’t kill the program. “I want to commit to the newer technology, the more advanced technology, but then if I do, with the funding uncertainty and trying to actually accomplish in a real time frame, it’s really hard to go do that.” This is because of the long technology development cycle that’s currently standard in the industry.

But what can be more damaging than small budgets is no budget at all. NASA only got funding for the 2017 fiscal year (Oct. 1, 2016, to Sept. 30, 2017) in March, halfway through the period it covered. Gerstenmaier said he was approaching the point where he would have needed to freeze contracts — the sort of unplanned change that’s much harder to handle, and that may well continue as budget tensions ride high. But that’s life, he said. “We can complain about the environment or you can figure out how to deal with the environment, and we’re figuring out how to deal with the environment.”

It turns out, it’s really hard to take something that has been hurtling through space and place it very gently on a planet’s rocky surface. When NASA landed its Curiosity rover on Mars in 2012, it literally billed the landing process as “Seven Minutes of Terror” because of how risky that maneuver can be.

And as Gerstenmaier explained, a spacecraft for a crewed mission would be at the bare minimum 20 times heavier than Curiosity. And, you know, would have real live people inside of it whom NASA would very much like not to crush.

Understandably, NASA isn’t quite sure yet how it will confront that challenge. Sorting out how to land is a big piece of both the budget puzzle and the timeline puzzle, Gerstenmaier said, adding that the mission’s flexibility has always been both a strength and a constraint.

But just because NASA’s plans are still developing shouldn’t mean Mars can’t inspire us — or that we’ll never make it there.