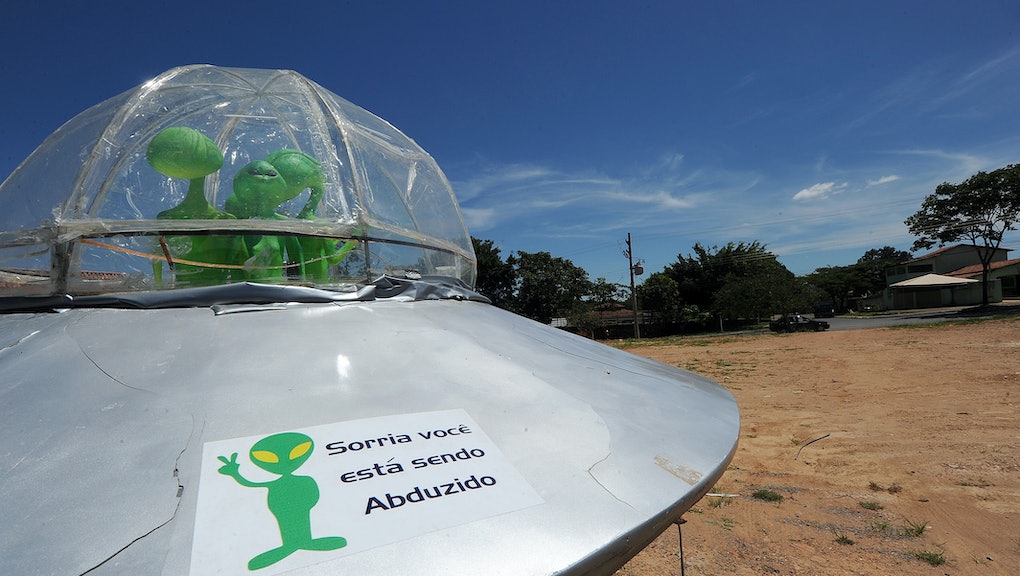 Everyone enjoys a nice conspiracy theory, so when we saw a few outlets like the Express and the Daily Star reporting on a new claim that aliens watched the crucifixion of Jesus, we were intrigued. So we investigated — and now we’re here to tell you where it all went wrong.

The headlines are all based on a video posted July 13 by the YouTube account Varbage, which offers videos summarizing a range of alien conspiracy theories interspersed with theories about Nazis and Nessie.

The video is focused on a painting found in Svetitskhoveli Cathedral in Georgia (the country, not the state). The cathedral was built in the early 11th century and is recognized, with other Eastern Orthodox buildings in the city of Mskheta, as a UNESCO World Heritage site.

The painting that got everyone so riled up depicts the crucifixion:

Right below each of Jesus’ hands, you’ll see something that looks kinda like a jellyfish (or, if you like aliens, a UFO).

The video claims that art historians believe these are representations of guardian angels. That appears to be inspired by an explanation published on a website called Ancient Aliens. In addition to the angel theory, it also scorns what turns out to be the real explanation: that these are depictions of the sun and the moon.

We called Andrew Gould, a specialist in Eastern Orthodox architecture and art. “It’s absolutely universal in Byzantine or Eastern Orthodox icons of the crucifixion that the sun and moon are present above the cross,” he said.

He explained that it’s a reference to the gospel, which says that after Jesus died, the sky went dark for three hours.

The Eastern Orthodox tradition incorporates the sun, for its dimming, and the moon, since it would have appeared bright in the sky with the sun dimmed, into depictions of the crucifixion. The idea is to show that it was an event with cosmic significance.

Sometimes they are depicted as crescents, in other cases the celestial bodies are represented as full circles. Sometimes they’re stationary, sometimes they have what looks like a comet’s tail, as is the case at Svetitskhoveli. Here’s an example:

Yes, those suns and moons do have faces in them, Gould said. The Eastern Orthodox tradition carries on ancient practices of personifying the sun and moon in artistic depictions.

Not only is this particular conspiracy theory wrong, Gould says it’s actually pretty rude. The Eastern Orthodox tradition is based on codified, publicized and consistent beliefs. Under-the-table knowledge about the crucifixion being passed down and reappearing suddenly in art more than a millennium later, he says, is “pure fiction” inspired by Dan Brown novels: “It would be almost a cultural offense to the Orthodox church to believe such a thing, that the church would hide secrets in holy images.”