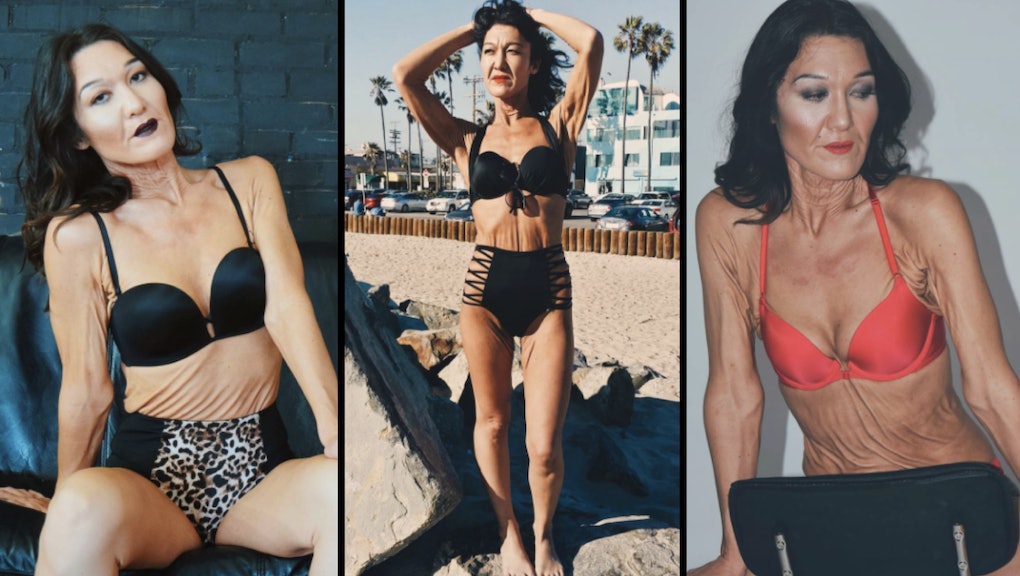 Around the age of 10, Sara Geurts started to notice how her stretchy skin didn’t look like anyone else’s. At first, she wasn’t insecure about it, because, as she told Mic in an interview, she considered it to be “so cool because no other kid could do the things that I could with my skin and joints.”

Soon, Geurts would be diagnosed with Ehlers-Danlos syndrome, a connective tissue disorder that can affect the way collagen is processed. Collagen helps maintain the structure of the human body, in the skin, joints and also in the tissues that support internal organs.

Now 26 years old, Geurts has decided that this disorder isn’t going to stop her from living her life to the fullest. She’s been modeling and photographing herself since she was 22 or 23 as a way to take a stand against the “perfection” the fashion industry tries to promote.

“I think that the modeling industry is based around the vision of ‘perfection’ and by putting my ‘imperfections’ out there, it’s almost like a slap in the face to the industry: shock factor, a sense of rebellion,” Geurts said. “By going against what the ‘norm’ is within the industry and getting such positive feedback, it really enforces my vision of myself, the journey I am on, and just being perfectly imperfect.”

And isn’t that what body positivity is really about? Showing the world that no one person can make the rules for what really is beautiful or not?

Since becoming a bit of an Instagram icon herself (Geurts has over 9,000 followers), she’s had to deal with people who don’t understand her, for sure, but has also seen a wave of positive feedback from people who can connect to her story.

“There are always going to be those who don’t entirely understand what you’re doing, or see the vision you have put forth,” Geurts said. “But the good always outweighs the bad, and the amount of Ehlers individuals who have offered their insight and support has been what keeps me going.”

As for advice to people with Ehlers, or anyone who struggles with their self-image, Geurts put it like this: “Never give up. Know you always have support, and reach out to those when you need. The journey you are on is individual to you, and makes you who are. No one else walks the same journey, or bears the same stripes as you. Wear your stripes with my pride, my love, and know you have a whole herd of support.”