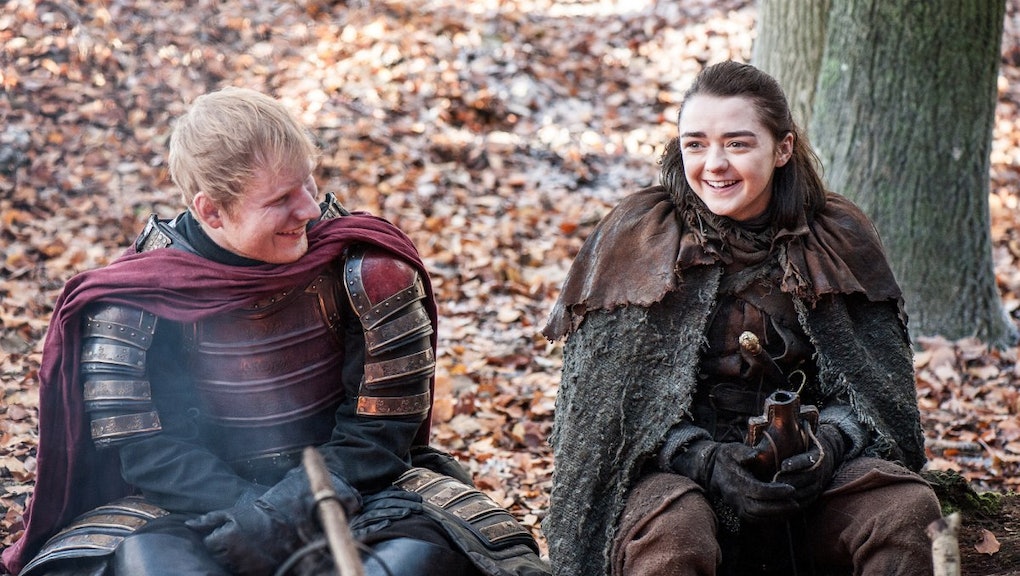 When Arya Stark was heading toward King’s Landing by horse through the Riverlands and a soldier gently sang at a campfire, I immediately thought, “Of course, it’s Ed Sheeran.” Now, that’s not a normal reaction one has when watching Game of Thrones, but I had the foresight of reading that the singer was pegged to have a cameo in this season alongside Maisie Williams. So yeah, a soldier having the Westerosi version of a Tiny Desk concert in the middle of the woods was quite telling.

But here’s where things actually get surprising: The Sheeran cameo in the season seven premiere was actually pretty great, and quite understated, once he stopped singing.

The scene worked as a juxtaposition to the episode’s cold open, which sees Arya posing as Walder Frey, who she killed back in the season six finale. Using her skills as a Faceless Man — though it’s still kinda unclear just how she’s able to wear other people’s faces — she gathers the Frey sons and, while in disguise, proposes a toast. By the time some of the Freys start grabbing at their throats, it’s clear that Arya’s taken a page from Gus Fring’s book in Breaking Bad and has poisoned the drinks, wiping out the Frey clan in a matter of minutes. As a staunch Stark supporter, it was an immensely satisfying introduction to the new season but, still, a somewhat concerning development. It’s reasonable to worry that Arya is slowly losing her humanity with every vicious kill she carries out — at this point, she’s a straight-up serial killer. The first thing we see this season is her murdering an entire family.

So watching Arya encounter a group of Lannister soldiers later in the episode, with Sheeran among them, I envisioned a scene reminiscent of when Arya and the Hound kill a group of Frey soldiers following the Red Wedding. Unnamed foot soldiers getting slaughtered like it’s no big deal is as much a part of this show’s DNA as nudity, dragons and Cersei Lannister sipping wine. Now, Ed Sheeran’s part of that makeup as well.

How surprising, then, that before Arya could calculate a potential plan of attack, the soldiers offer her a seat, some food and some wine. One guy talks about his wife back home and how she’s just had a baby (he doesn’t know the gender, though — lowly soldiers aren’t privy to raven messages). “My mother always told me to be kind to strangers, strangers will be kind to you,” another tells her.

It’s one of the smallest moments in the premiere, which also includes a shot of ice zombies embarking on a march to destroy everyone and everything in their path. In spite of all the bloodshed and the fire-breathing dragons, Thrones’ best moments are sometimes the quietest.

The scene humanizes the Lannister soldiers, who are typically painted with a broad stroke — they’re all bad guys! — because they’re associated with Cersei, and, previously, Tywin and Joffrey. It’s easy to forget with the series’ focus on some of the biggest players in the game that the pawns don’t often have much of a voice on this show. One soldier jokes about the songs that will be sung about them 1,000 years from now, because they’ve done next to nothing. It’s hard to imagine Westeros as mundane and boring, but that’s the case for many of the characters when they’re in between life-threatening situations. The audience constantly hops around the map, but these people are sitting in the woods, fixing themselves a meal while Sheeran sings a song.

It bodes well for Arya’s soul that she’s able to sit down with the enemy and avoid an unnecessary confrontation with men who want peace and to return to their families. Because yes, we should be concerned for Arya in the long-term. She almost became “no one” by training to be a Faceless Man, and her reason to reclaim her identity as Arya Stark was entirely motivated by vengeance. I’m not saying that Arya not slaughtering Sheeran and co. means she’ll stop her murderous revenge tour, but it gives hope to the idea that she could perhaps return to a somewhat normal life once the dust settles. Remember, now she’s got a home and family to go back to in Winterfell.

On a show predicated around surprising twists, the season seven premiere didn’t offer many. But I’d count a famous musician making a cameo in the episode’s most poignant scene a shock in and of itself.