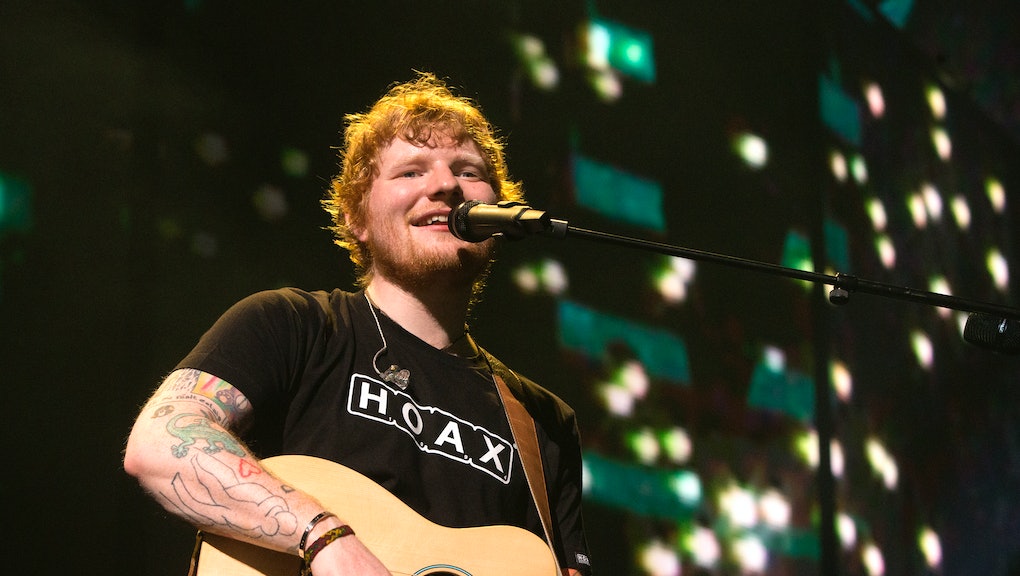 Ed Sheeran helped kick off the seventh season premiere of Game of Thrones on Sunday night, to the great delight (and, in some cases, chagrin) of the show’s die-hard fanbase. His cameo had been teased for a while, but it wasn’t clear just what role he would play. But of course he ended up singing onscreen, playing a footsoldier for the Lannisters with a decent set of pipes.

In the episode, Arya Stark catches him singing a “new” tune for his Lannister mates, about a man troubled by a “secret” love that is his “shame and his bliss.” But for anyone who’s read the books, the song isn’t entirely new. In fact, they would have read repeated snippets of it sprinkled throughout chapters focused on Tyrion Lannister.

He rode through the streets of the city, down from his hill on high,

A King’s Landing singer, Symon Silver Tongue, pens the lines in A Storm of Swords, the third book in the series, as a means to blackmail Tyrion. The two met previously in A Clash of Kings, the second book in the series, when Symon recognizes Tyrion as the King’s Hand while he’s visiting his secret lover, Shae.

A few veiled threats serve to keep Symon quiet for a while, but right before Joffery’s wedding, the singer demands a favor in exchange for his continued silence. He demands the Lannister strategist enter him into the singing tournament that will take place during wedding, or else he’ll tell the king’s mother, Cersei, everything he knows. The bard has even written a song to help drive the message home.

The above lyrics air out the details of Tyrion’s secret affair. He “rode the streets ... down from his hill on high,” aka the Red Keep at King’s Landing. The reference to “hands of gold” is a clear nod to Tyrion’s position as the Hand of the King and part of the Lannister family, who always pay their debts. It also serves as notable foreshadowing, as Tyrion eventually strangles Shae with a chain of golden hands after she sleeps with his father.

Symon never gets his chance to participate in that singing competition, as Tyrion asks his right-hand man, Bronn, to keep his silver tongue but make sure his body is “never found.”

“There’s a pot shop I know in Flea Bottom makes a savory bowl of brown,” Bronn replies. “All kinds of meat in it, I hear.”

Sheeran might actually be Symon in a slightly altered timeline — a version of the character who dodged Tyrion’s wrath and lived to sing about the Lannister’s former love life. (Alas, this is probably just wishful thinking — on IMDb, Sheeran’s credited simply as “Lannister soldier.”)

Regardless of the connection to Tyrion in the books, the song’s lyrics offer an ominous introduction for the assassin Arya, who has been slowly exacting revenge for all of the tragedies the Starks have suffered at the “hands” of a “gold”-obsessed family. Several of the people who’ve aided the Lannisters in their warpath already lie cold in the ground, and “a woman’s hands are warm” could be interpreted as a reference to the blood on Arya’s hands.

Twitter theorists have also suggested that the line about the hands of gold could refer to Jaime Lannister, who has a literal golden hand, foreshadowing his eventual murder of Queen Ceresi.

Stories of infidelity, greed and murder — quite a departure from pop’s no. 1 nice guy.