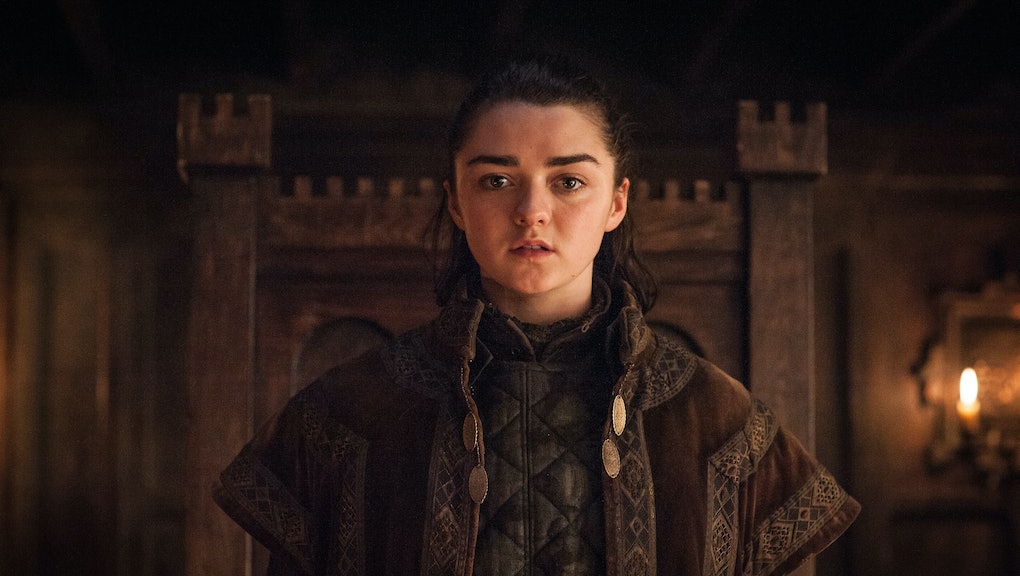 ‘Game of Thrones’ Theories: Lady Stoneheart gets her revenge — through Arya Stark

The cold open to Game of Thrones season seven appeared to be a flashback: Walder Frey has gathered his sons for another hearty feast. Two in a fortnight? He’s in a festive mood. He wants to toast the family’s successes and recalls the infamous Red Wedding. At some point during this scene, you realize Walder Frey isn’t actually Walder Frey: It’s Arya Stark wearing his face, putting her skills as a Faceless Man to good use.

It’s a delightfully twisted, yet poetic end to the Freys, who are wiped out in a matter of minutes from a poisoned drink in the same halls that they brutally massacred a pregnant woman, her husband and an emotionally devastated mother, along with the Stark army. The Red Wedding is still one of the show’s most iconic — and gruesome — scenes, but as fans of George R.R. Martin’s novels know, that’s not the last sight of Catelyn Stark — technically.

The HBO series has teased fans with the arrival of Lady Stoneheart, the name bestowed upon a resurrected Catelyn, disfigured from her murder and unable to speak after having her throat slashed. Taking over the Brotherhood Without Banners in the books, Lady Stoneheart terrorizes the Riverlands by killing anyone associated with the Freys or the Red Wedding.

But Catelyn’s re-emergence seems more and more unlikely, especially after Beric Dondarrion’s onscreen return last season (in the books, he sacrifices himself to bring Catelyn back to life). Still, we’re going to keep an eye out for all things related to Lady Stoneheart, since we’re following some of the most interesting fan theories for this season of Thrones. And judging from Sunday night’s premiere, it looks as though the undead Stark’s thirst for vengeance might be satisfied in a different way. Even if Lady Stoneheart doesn’t exist in the show, Arya’s carrying out her subplot through her own quest for revenge.

Though the show’s depriving book readers of Catelyn’s return, Arya’s a worthy avatar for Stoneheart’s desire to destroy the Freys. In a way, it’s more befitting for the show, which is racing toward its endgame. Instead of slowly plucking the Freys off one by one — that would’ve taken a while — it’s neatly resolved in a single scene that wipes an entire family off the Westerosi map. Between the Frey massacre and the Bolton’s defeat last season at the Battle of the Bastards, the Starks have avenged the Red Wedding. This allows GoT to move past the Riverlands and focus on other areas of interest in the realm: mainly, the North and King’s Landing.

It’s also worth noting how the show frames Arya’s vengeance as a Stoneheart stand-in through the series recap that precedes season seven’s cold open. We revisit not only Arya slicing Walder Frey’s throat, but that scene is also juxtaposed with the final image from the Red Wedding, of Catelyn getting her throat slit.

It’s unlikely that the words “Lady Stoneheart” will ever be spoken on the show — though never say never, because HBO just posted a clip from the premiere titled “Arya and Ed Sheeran,” so anything’s possible, really. But Arya’s storyline is basically Lady Stoneheart’s storyline. There’s no need for a zombified version of Catelyn because, as Arya says in the cold open, “Leave one wolf alive and the sheep are never safe.”

• Per our theory that Jaime will eventually kill Cersei, the tension between the Lannister siblings is palpable in the premiere, as Jaime is revolted by his sister’s unemotional reaction to Tommen’s suicide. It’s nowhere near enough to peddle this theory as a sure thing, but there’s a definite rift between them — one that needs to be healed soon if they want to survive the other threats that are eyeing the Iron Throne.

• What’s Littlefinger up to? Well, Sansa’s very much aware that he’s interested in her as a suitor, and delivers the most casually vicious shade while dismissing him at Winterfell. “No need to seize the last word, Lord Baelish, I’ll assume it was something clever.” Yikes. Someone fetch a Maester, Littlefinger’s on life support.

• No sign of Nymeria, Arya’s long-lost direwolf, in the premiere, but the sight of a direwolf in the episode two preview could mean one of two things. Either we’re looking at Ghost — who looks grayish in the teaser because of the scene’s lighting — or Nymeria’s making her grand return after several years offscreen. We hope it’s the latter.