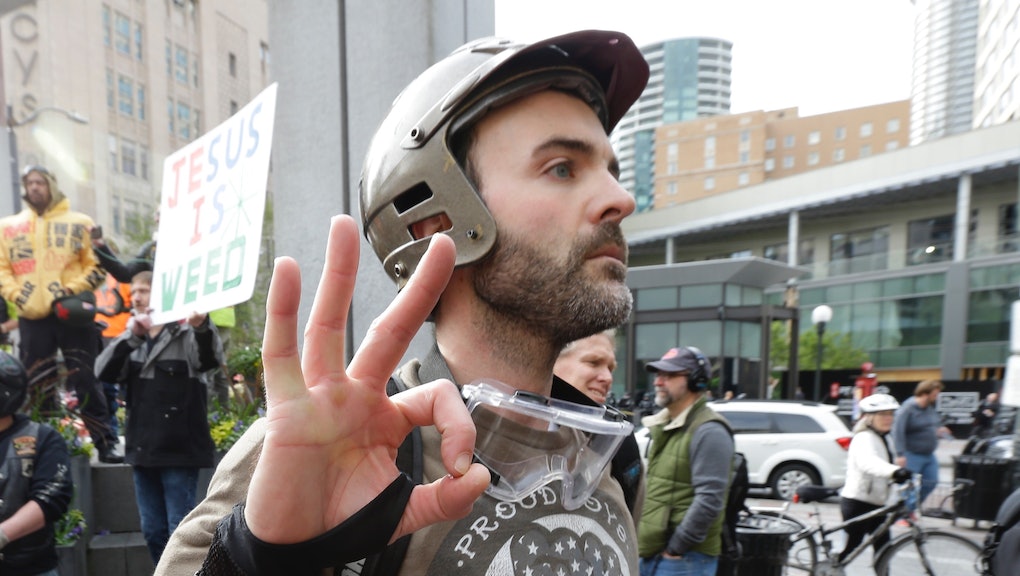 Canada has its own ‘alt right’ problem, and isn’t hesitating to act fast

The resurgent far right movement, or the so-called “alt right,” is usually described as an American phenomenon, a blowback to the election of a black president that sprouted like a mole on the face of American popular consciousness, normalizing white supremacy and ushering President Trump into power.

But new militant far-right groups are sprouting up across the globe, in England, France, the Netherlands, Ukraine and, yes, even Canada.

Over the weekend, anti-fascists interrupted yet another right-wing rally, this time in Canada. The rally was held in solidarity with a group of military service members called the “Halifax Five,” who are also part of an alt-right fraternity called the Proud Boys. The five were suspended from the military for interrupting an indigenous ceremony in Halifax on Canada Day, and since then, Canadian media has been fixated on the Proud Boy phenomenon, comfortable identifying them as misogynists and white nationalists.

And though the Proud Boys are an American phenomenon, Canadian media, people and institutions have rapidly diagnosed and responded to their briefly emergent right-wing phenomenon, even as Americans still struggle with how to deal with the matter of homegrown racism on U.S. soil.

Canada was almost entirely quiet about the Proud Boys until the indigenous ceremony on July 1. As dozens gathered and an indigenous woman shaved her head in mourning, a group of five Proud Boys wearing Fred Perry polos — the aforementioned Halifax Five — began singing “God Save the Queen” and heckling the indigenous about their citizenship status. Shortly after videos and articles started hitting the internet, the five were suspended from military service, and Canada’s top general apologized to the indigenous community for the incident.

“These disrespectful actions do not represent the Canadian Armed Forces members I serve as Minister of National Defense,” Canadian Defense Minister Harjit Sajjan wrote in a statement on Facebook.

The Proud Boys are a self-described “Western chauvinist” group that functions like a fraternity for adult men, started by Vice co-founder Gavin McInnes, who is himself Canadian. Their core tenets include “glorifying the entrepreneur” and “venerating the housewife.” They’re not explicitly racist in their core beliefs, and their members include people of color. Rather, they’re a “neo-masculine” traditionalist fraternity that cleaves to strict gender roles.

In the U.S., the Proud Boys have become one of the most reliably violent, disruptive groups on the far right. They have been arrested at fights in New York City and Boston, and were among those who stormed the stage at a controversial performance of Julius Caesar in New York City.

Still, the U.S. is torn in two over the alt right. Right-wing media runs constant coverage of anti-fascists with the intent on ginning up a left-wing terroristic threat against the alt right’s “free speech,” while the academia and media fascination with the right has spent years trying to discern its roots and ideology, and determine the proper response to the movement.

But since Trump’s election, Americans are learning to deal with emerging far right sentiment in their communities. In Albany, New York, two people associated with the Proud Boys were forced to resign from a tattoo parlor when the news of their affiliation with the group went public.

“I hope that the Albany community will stand up behind the employers — who are truly between a rock and a hard place — and send the clear message that we will support them if they defend the safety of all of their clients and community,” one local women wrote in to Albany’s Times Union newspaper.

Perhaps such communities should look northward for inspiration.