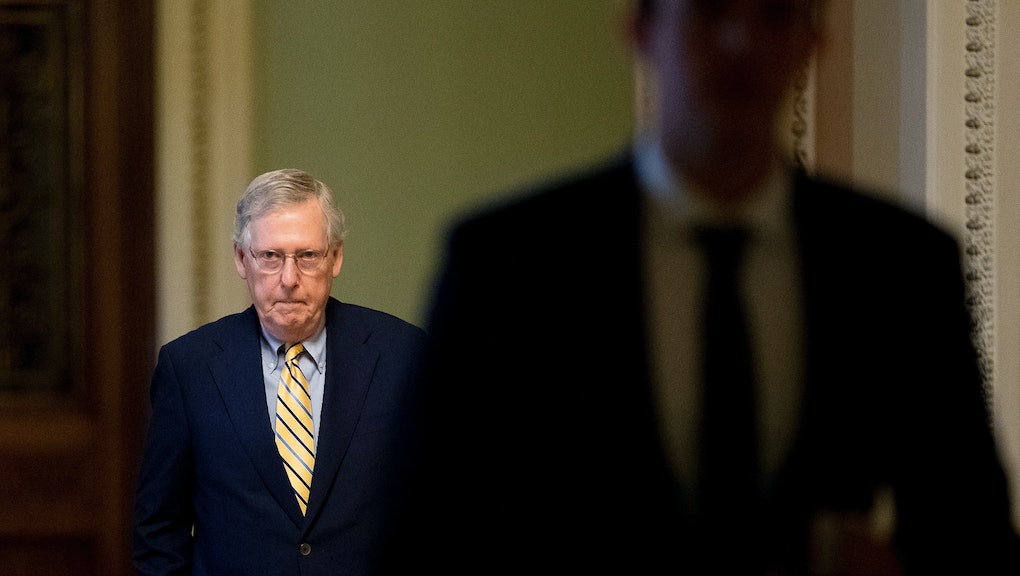 This is Mic’s daily read on Donald Trump’s America. Welcome to the political newsletter that will be tracking health care developments closely.

Today: Three conservatives and one moderate have killed the Senate health care bill.

More: Republicans will vote anyway, on a repeal of the Affordable Care Act without a replacement.

Even more: The House GOP budget has been released.

Yes, more: Iran is complying with the nuclear deal.

The Senate health care bill does not have the votes. Here’s what will happen next.

“For the same reasons I could not support the previous version of this bill, I cannot support this one,” Moran’s statement reads.

“In addition to not repealing all of the Obamacare taxes, it doesn’t go far enough in lowering premiums for middle-class families…” Lee’s statement reads.

There’s no sugarcoating this: After six months of daily work on health care, Republicans now have no path to altering the ACA. So Senate Majority Leader Mitch McConnell (R-Ky.) is going to hold a vote anyway. After seven years of promising to gut the law, McConnell wants to show he did everything he can to kill the ACA. The vote will happen “in the coming days.” President Donald Trump encouraged that approach on Twitter. Then, Tuesday morning, he said the GOP should “let Obamacare fail.”

Keep this in mind: Three of the four senators are opposing the Senate plan because they think it is too moderate. They want to see a plan that goes further in pulling the federal government out of health care policy. Sens. like Lisa Murkowski (R-Ala.) and Shelley Moore Capito (R-W.Va.) were seeking smaller cuts to Medicaid and more support to drive down premiums.

Now, McConnell is advancing the truly conservative option: an outright repeal of the ACA with no promise of a replacement. Some of the currently opposed conservatives may support that move, but Republican moderates are expected to balk at the proposal.

It’s highly unlikely 50 Republicans will vote to repeal the ACA without a replacement. The politics are different from 2015, when Republicans knew then-President Barack Obama would veto their plan. Now, they face a White House ready to implement a plan that would leave 32 million uninsured — with Congress taking the blame come 2018. Also remember Sen. John McCain (R-Ariz.), who also had deep reservations about the second Republican bill, is recovering from surgery and cannot help McConnell. (He said Monday the Senate must now seek a bipartisan approach.)

Democrats are demanding bipartisanship. Shut out of the first round of health care negotiations, Democratic senators are telling Republicans to come to the table to tweak existing health care law. “Lay [repeal] to bed and work with us to strengthen the ACA for all Americans,” Sen. Dick Durbin (D-Ill.) implored on Twitter.

Read more: New York Times: Think piece reaction from the right and left. Politico: While Trump was strategizing with senators over steak, the statements killing Trumpcare were being finalized. Fox News: Newt Gingrich to Congress: Pass what you can. BuzzFeed: Keeping tax cuts on the wealthy lost conservative votes.

Today’s question: What do you think was the biggest factor in bringing down Trumpcare? Email your thoughts to trumpsamerica@mic.com.

The House Republican budget is live

The GOP unveiled its budget Tuesday morning, a plan that claims to balance the federal budget in a decade by cutting spending and relying on questionable economic growth data. The budget proposes cutting into Medicare and Social Security, areas Trump said he would not touch. It also suggests cuts to welfare programs, like SNAP.

Overall, Republicans say the plan would save the government $203 billion over 10 years. That may be too little for the conservative Freedom Caucus and too much for the moderate Tuesday Group — setting up the potential for yet another congressional showdown.

The Trump administration says Iran is complying with the Obama-era deal to prevent the country from developing nuclear weapons — but still criticized Iran.

The United States may intervene in Venezuela if the president there rewrites the constitution to stay in power.

Trump says he has passed a historic number of bills. That’s false.