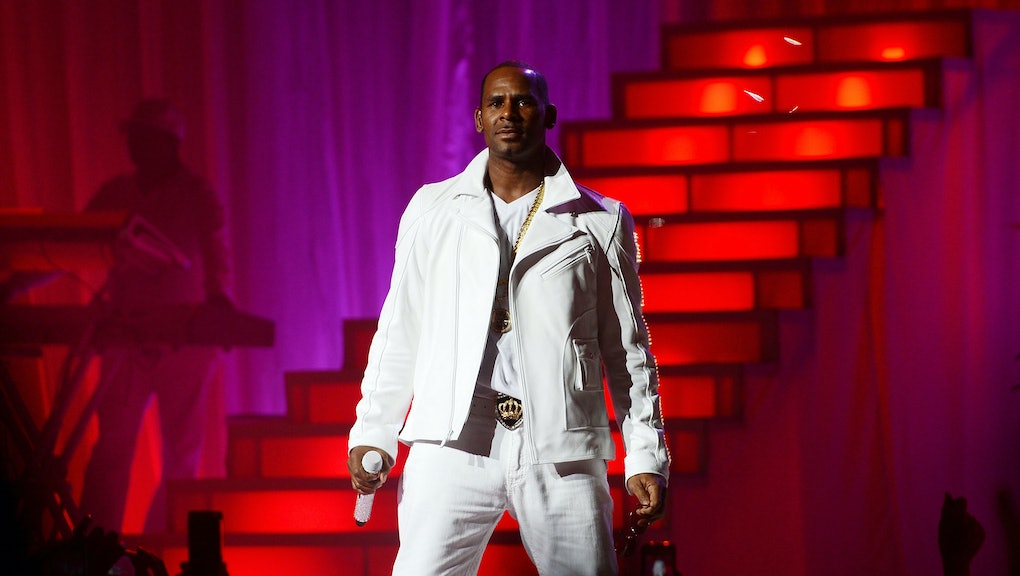 One woman living in R Kelly’s alleged “sex cult” says everything is fine. That doesn’t mean it is.

After BuzzFeed News dropped its bombshell story — alleging that R. Kelly runs a compound of a half a dozen women over whom he lords like a “puppet master” — one of his reported victims came forward to say that everything is “totally fine.” In a video interview with celebrity gossip site TMZ, 21-year-old Jocelyn Savage flatly denied that she is weathering a hostage-like situation.

“I just mainly want to say that I’m in a happy place with my life and I’m not being brainwashed or anything like that,” Savage told her interviewer. “I just want everybody to know, my parents and everybody in the world, that I am totally fine.”

When TMZ asked Savage if she was being held against her will or forced to do things she didn’t want to do, she said no. And when asked where she’s living, whether or not she lives with roommates and if she was free to go — Savage declined to answer.

Kelly’s reputation for alleged sexual misconduct spans decades: in 1994, when he was 27, he married 15-year-old Aaliyah; in 2008, the R&B star stood trial for alleged possession of child pornography; he has repeatedly been investigated for sex with minors. Those things considered, the report may not shock anyone who’s long followed Kelly’s legal entanglements, but it is cringe-worthy nonetheless.

The chilling details BuzzFeed turned up might make it hard to understand how anyone in Savage’s alleged situation could claim to be “fine,” but according to experts in intimate partner violence, Savage’s TMZ testimony bears all the hallmarks of a survivor’s typical response to abuse.

“I would be extremely surprised if this young woman said anything other than what she did say,” Julie Owens, a consultant on sex trafficking and domestic violence, said in an interview.

Without knowledge of what, exactly, is going on in Kelly’s “sex cult,” Owens said Savage’s testimony aligns with the “hundreds of stories” she’s heard in her 30 years of working with survivors. There’s the power imbalance between a powerful and well-established musician and his female fans pursuing careers in entertainment, Owens explained. There is also the isolation element, by which abusers will typically separate victims from their social network.

The report mirrors what Owens described as classic abuser behavior: According to longtime Kelly chronicler, journalist Jim DeRogatis, the 50-year-old singer is allegedly leveraging his waning industry status to lure young women away from their families and friends and into assigned rooms in one of his two estates in Chicago and Georgia. Kelly allegedly “brainwashes” the women into believing he loves and will help them, exercising authority over every aspect of their lives: what the women eat, what they wear, when they leave their rooms, when they go to the bathroom and how they have sex. Kelly reportedly cuts off all communication between the women and the outside world, allegedly subjecting them to verbal and physical abuse if they ever disobey.

That Savage could classify such an arrangement as “a happy place” might stretch the bounds of credulity, but in actuality, it’s not uncommon. Finding themselves in near total social isolation, people will “trade their defense skills for coping skills because they have no other choice, and they become bonded to the abuser,” Owens said. That abuser might use small acts of kindness — gifts, minor privileges — to strengthen that bond. “The only way to psychologically survive is for the victim to say, ‘This is okay, this is good, I’m alright, I really do have some control,’” when they really have no solution whatsoever.”

Rachel Teicher — director of Intimate Partner Violence Intervention at the National Network for Safe Communities — agreed that it is absolutely standard for victims to insist they’re safe and fine and want to be left alone when outsiders ask. She also agreed that power dynamics and isolation are key to understanding how sexual abusers build and exploit relationships.

But that’s not all there is to it.

“We often forget that, besides there being a very powerful dynamic of power and control, there can be love,” she said. “There can be very intense feelings of love or fidelity that can bleed into neediness or dependence once you’ve become incredibly isolated.”

That feeling of dependence is readily exploited, and helps keep victims from leaving. Both Teicher and Owens said that Savage seemed to have been coached in her responses to the interviewer’s questions, and that she grew flustered when he asked directly about her safety. Teicher warned that evoking panic in Savage might only serve to isolate her further.

“Now that people are making a public issue of this, it’s her and him against the world, it’s like their Bonnie and Clyde moment,” she said. “So something like this can bring you as a survivor even closer to your abuser, because no one can understand what the two of you are experiencing, and everything that this person has told you about the people in your life is now coming true.” In other words, it affirms the narrative an abuser feeds a victim.

While Owens and Teicher agreed that Savage’s responses were consistent with what they’d seen in their decades of interactions with domestic and sexual abuse survivors, both emphasized that any read on Savage or the situation she’s allegedly embroiled in is speculative.

At this juncture, we don’t know whether or not these latest allegations against Kelly are accurate. Legally speaking, Kelly could hypothetically avoid a sex crimes conviction if the women involved continue to say, on camera, that everything is fine. As spectators use Savage’s statement to frame the arrangement as a “polyamorous, sub/dom relationship,” though, or simply to say everyone involved is a consenting adult, it’s worth considering that Savage’s response is far from rare. In fact, it fits perfectly with behavioral patterns that allow people to survive abusive relationships.