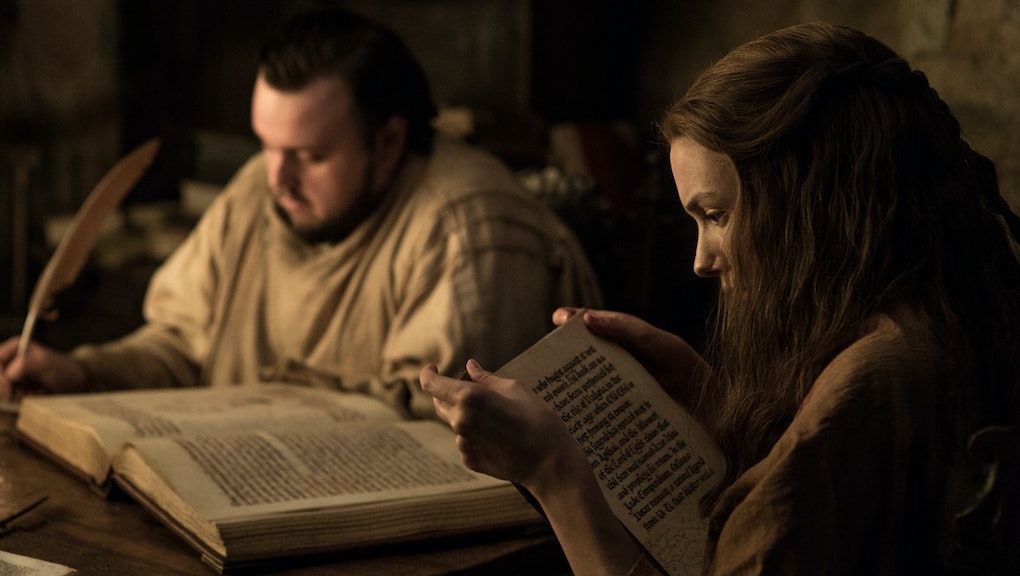 ‘Game of Thrones’ Theories: Could dragonglass save Jorah Mormont’s life?

Part of the fun of watching Game of Thrones is trying to uncover all of the possible Easter eggs each episode leaves behind. Since the series and books are brimming with plots and characters, there’s seemingly no end to such theories — and the first episode of season seven did not disappoint.

During Samwell Tarly’s storyline — after an absolutely revolting montage of him emptying and cleaning bedpans — the season seven premiere revealed a huge clue about the properties of dragonglass. Of course, anyone who simply watched the show could’ve easily missed it, but thankfully there are people like Reddit user Beastmodekait who zeroed in on something significant in one of the books Sam took from the restricted section of the Citadel library.

There’s obviously a lot missing from the above screenshot, but what’s most important is what can been read towards the bottom of the page: “considered dragonglass as a cure for [...] in his great work on illnesses and [...] little harm incurs from the ingestion.”

Now, if only there were a significant character in Westeros who might be able to benefit from some sort of miracle cure for serious illness.

It’s no coincidence that in the same episode, Sam encounters Jorah Mormont, whose case of greyscale has gotten significantly worse. Could dragonglass be the cure Daenerys sent Jorah to find in season six? Game of Thrones theorists on Reddit sure think so.

Once Beastmodekait posted his photo, redditors went to town talking about out how the obsidian-like substance could have healing properties as well as White Walker-killing properties. But there’s one connection in particular that Beastmodekait made to Shireen Baratheon, another character who survived greyscale. Stannis Baratheon’s daughter not only recovered from the disease, but also happened to reside at Dragonstone, the home of a mountain-load’s worth of dragonglass. That seems far too convenient to just be a coincidence.

If Shireen’s greyscale was, in fact, cured by the dragonglass on Dragonstone, it’s horribly ironic Daenerys just landed there and sent her former righthand man elsewhere. However, if Sam takes a moment to think of dragonglass as something other than a weapon, he might make a discovery that both saves Jorah’s life and reunites him with his beloved queen.

One thing’s for sure, he better get some kind of medical help soon — from the looks of Jorah’s greyscaled arm, he doesn’t have much time left.

We would love to hear your thoughts! If you have any Game of Thrones theories you’d like to submit (so long as they’re not about Varys secretly being a merman), shoot us a message at got-fan-tips@mic.com.

The seventh season of Game of Thrones airs Sundays at 9 p.m. Eastern time on HBO.