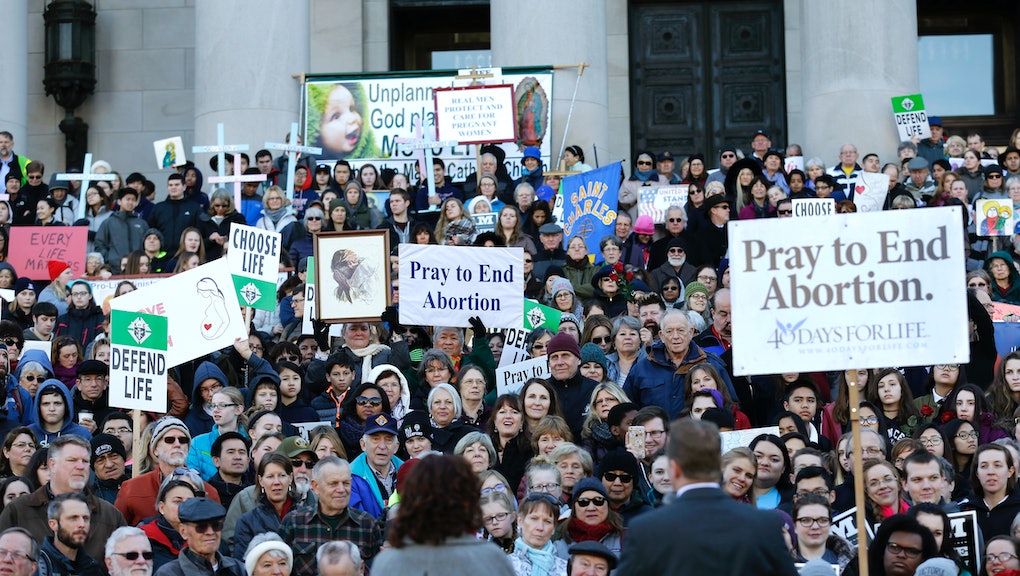 The First Amendment promises that, among other things, “Congress shall make no law ... abridging the freedom of speech” but, in reality, there are always some legal restrictions on self-expression, as upheld by the Supreme Court.

One of the exceptions is for commercial speech, which is generally defined as speech intended for commerce and aimed at consumers or potential consumers. It’s a legally tricky area of law in which the courts have determined the purpose of the speech and its audience determines whether outright lies or significant omissions are subject to First Amendment protections.

And it’s an area of law the anti-abortion movement seems determined to exploit in an effort to gain the right to mislead people who seek medical care from any health care provider opposed to abortion or birth control.

Whether the anti-abortion movement has a First Amendment right to lie to pregnant patients is the crux of a number of lawsuits in Illinois, consolidated by the courts, in which 20 crisis pregnancy centers are suing the state. They claim that their constitutional rights will be violated by a new rule that went into effect on Jan. 1. The rule requires that all medical professionals adhere by a “standard of care” that includes informing patients of all their medical options for a given diagnosis or situation, regardless of whether or not a provider is morally opposed to a given relevant option.

Though broadly written, the law acts as a revision to Illinois Health Care Right of Conscience Act, a decades-old state law that was passed following Roe v. Wade, in order to ensure that providers who were opposed to abortion for religious reasons were legally able to recuse themselves from performing the procedure. The new amendment still doesn’t force anyone to perform a procedure to which they have religiously motivated objections, but it does require that they inform their patients about everything relevant to their care and conditions. In other words, it is now illegal for a reproductive health care provider to not tell a patient about the existence of contraception or abortion.

But crisis pregnancy centers are, essentially, health care centers — though they don’t function like many other medical providers. Still, they often advertise and present themselves as full-fledged medical facilities, even when they are mostly avenues through which anti-choice activists — some of whom are licensed medical professionals — can try to convince people facing unintended pregnancy to avoid abortion.

So now, some of these Illinois-based CPCs claim that the new amendment violates their First Amendment rights by requiring them to mention procedures which they oppose on religious grounds.

The new amendment wasn’t, however, intended to target crisis pregnancy centers, according to Lorie Chaiten, director of the Reproductive Rights Project at the American Civil Liberties Union of Illinois. As Chaiten explained in an interview with Mic, the new amendment was designed to ensure that all patients in Illinois receive care that meets the standards to which any given medical specialty is held, regardless of the religion of the provider. Legally, medical professionals are evaluated by whether they meet a “standard of care” — a certain degree of skill and knowledge that would be considered the norm amongst peers — when it comes to evaluating whether malpractice has occurred. Chaiten explained that the bill was designed to help pregnant people get information about all their medical options, whether or not the doctors involved would participate in carrying out the patient’s chosen course of action.

The ACLU of Illinois was one of the leading forces in the state working to pass the new amendment to guarantee that patients were not denied knowledge of treatment options at the expense of a provider’s religious beliefs.

For example, Chaiten pointed to a situation in which a pregnant woman who had planned to have a tubal ligation could be wheeled into an operating room for a C-section, totally unaware that her Catholic doctor wouldn’t perform the tubal ligation. In that case, the woman might have to have a risky second surgery. The surgeon’s objections should have been made clear prior to the initial surgery.

Crisis pregnancy centers being forced to disclose the full range of a people’s medical options is simply a side effect of the larger amendment. “Because ‘health care provider’ is defined very broadly under the statute, anybody who issues any aspect of the provision of health care is covered by the statute by definition,” Chaiten said.

“It means that crisis pregnancy centers and the people who work in them — who hold themselves out as health care providers — are covered by Right of Conscience and now must also meet the obligations of this new amendment.”

Chaiten doesn’t have a lot of sympathy for the CPCs’ arguments that they have a First Amendment right to keep from telling their patients the full truth. “You don’t get a free pass. When every other health care provider has to give standard of care information, so do you,” Chaiten says. “It’s not like you have to say, ‘abortion is good.’ That’s not what it is.”

And, there is legal precedent for the government to regulate commercial and professional speech in a way they can’t with other forms of speech, Kelli Garcia, senior counsel with the National Women’s Law Center, said.

Garcia said that this area of First Amendment law is “pretty well established” because the government has “an interest and a duty to protect the health and well-being” of its citizens.”

Chaiten said that, in a number of amicus briefs they’ve filed on these such issues, the ACLU has noted that patients make decisions about where to go based on the information a provider advertises, just as they make decisions about the kind of treatment they will receive based on the kind of information a provider gives them. She explained that this is exactly the sort of speech the Supreme Court envisioned as commercial speech, so that it could constitutionally be regulated to require accuracy.

Meanwhile, the challenges to Illinois’ amendment come on the heels of the news that the Ninth Circuit Court of Appeals moved to uphold San Francisco’s Pregnancy Information Disclosure and Protection Ordinance — another law recently challenged by CPCs. The San Francisco law prohibits CPCs from making false or misleading statements claiming that they offer abortions, emergency contraception or referrals to abortion providers.

The NWLC’s Garcia says the Ninth District’s ruling speaks to exactly the issues now at play in Illinois.

“We have truth in advertising laws that exist in other realms, and crisis pregnancy centers shouldn’t be able to say we’re going to get out of the standards, the rules and regulations that regulate everyone else,” Garcia says. “People expect when they see advertisements that they get what they expect.”