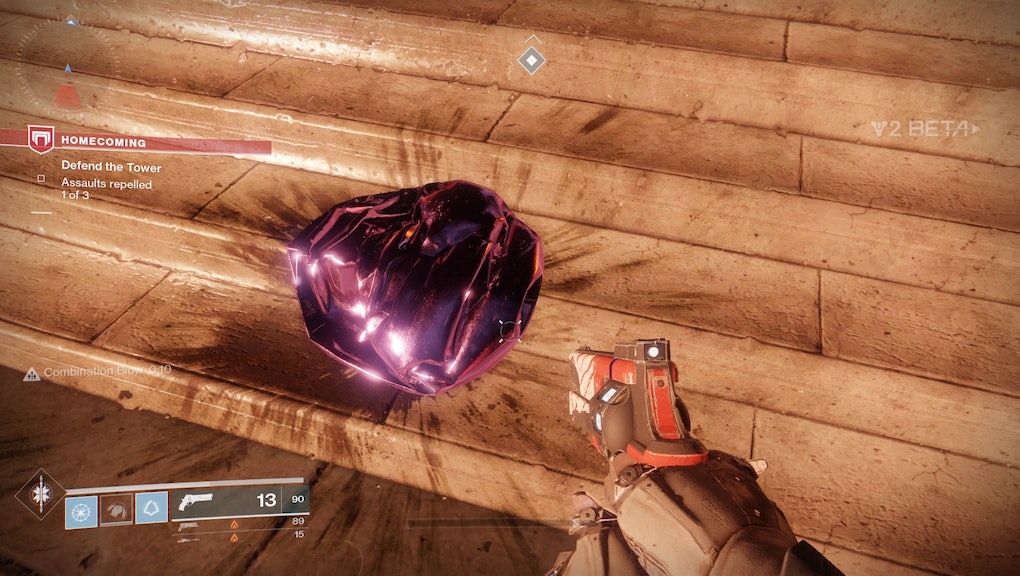 The beta has only been out a day, but some Destiny 2 beta secrets have already given us a hint at what we can expect when the full game drops in September. There are a few Easter eggs for longtime Destiny fans to discover as well.

Though the Destiny 2 beta released Tuesday for PS4, Xbox One users had to wait until Wednesday to get their first taste of the game. Although players prepped for server outages, we’ve already had our first look at some of the game’s new features, including weapon mods.

There were a lot of casualties when the Cabal took the Tower, and sadly, one of them was the beloved Purple Ball that hung out in the Tower in Destiny. According to VG24/7, you can ascertain the fate of everyone’s bouncy aubergine friend during the “Homecoming” preview mission. While fighting your way through the Tower, you’ll come across the deflated Purple Ball on a set of stairs.

This Easter egg is a little traumatic, but rest assured the other one is substantively less so.

Destiny 2 secrets: Bungie gives “Hope for the Future” the sendoff it deserves

Back in 2014, Bungie worked with Sir Paul McCartney to make a single for Destiny titled “Hope for the Future.” The video for the song is really something, featuring a hologram McCartney singing in the world of Destiny.

According to the YouTube account DestinyOverwatch, you can hear a little bit of the single playing on the jukebox in the Tower hangar during “Homecoming.” It’s a little hard to hear since the jukebox has certainly been crushed by debris, but listening to a warbling, malfunctioning version of the song play while fighting your way out of the Tower is a great callback.

With any luck, hopefully the YouTube commenter who remarked “Xur’s having a party down there,” is right.

Destiny 2 secrets: Fans think they found a hidden sector door in one of the beta’s strikes

According to VG24/7, fans are convinced they’ve found a “lost sector,” a promised feature that VG24/7 calls “a public event, but with more of a puzzle aspect to it.” During the Inverted Spire strike, players have found an enormous door with the same sigil as was on the Vault of Glass, the first raid in vanilla Destiny.

Though a couple of fire teams poked around to see if they could get inside, only one player managed to glitch themselves into the area so far.

Hopefully, players will uncover more Easter eggs and secrets during the beta — but there will be no shortage of them in the full game when it drops Sept. 6.

If you can’t wait to get back out on patrol with your Fireteam, check out the rest of our coverage for Destiny 2. We’ve got the scoop on why Bungie opted not to use dedicated servers for the sequel, why there won’t be cross-play and cross-saves for PC and what you can expect from the game’s PC specs and Battle.net partnership. Additionally, you can check out the new Supers being added to the game, some details behind guided games and the new Crucible changes. Finally, you can check out our ongoing coverage of the beta here.