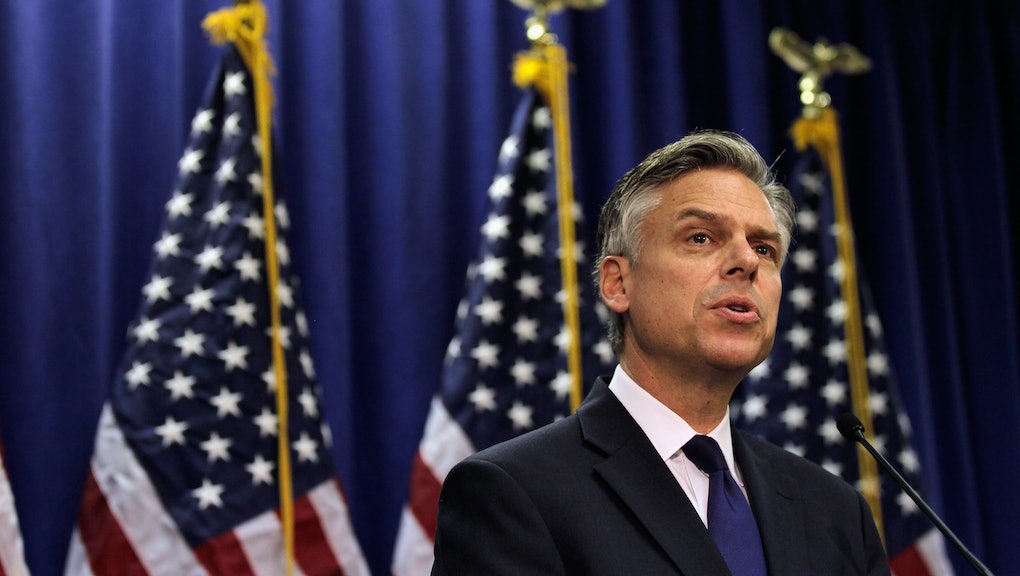 Who is Jon Huntsman? Here’s what to know about Trump’s pick for ambassador to Russia.

As the investigation into the Trump campaign’s alleged collusion with Russia continues, President Donald Trump officially announced on Tuesday who he’s chosen to represent the U.S. in the controversial nation: Jon Huntsman.

The former Utah governor’s nomination as the U.S. ambassador to Russia has been months in the making, according to the Washington Post. The White House first confirmed that Huntsman was Trump’s choice for the position back in March, but as all ambassadorships must be confirmed by the government of the country in which they serve, it reportedly took until Monday night for the Kremlin to approve the choice.

Huntsman comes to the Russia appointment with years of diplomatic experience behind him — along with an often-fraught relationship with Trump. Here’s what to know about Trump’s ambassadorial pick.

Huntsman previously served as governor of Utah from 2004 to 2009, where he earned approval ratings of over 80% and led the state to earn the distinction of being named the “Best Managed State in America” by the Pew Center on the States, according to the Brookings Institute.

In 2009, Huntsman stepped down from his gubernatorial position to reach across the aisle, as he accepted former president Barack Obama’s nomination to be the U.S. ambassador to China.

This was Huntsman’s second stint as an ambassador, having previously represented the U.S. in Singapore from 1992 to 1993 under President George H.W. Bush. His appointments to Asian countries reflected the politician’s vast experience in the region, as Huntsman previously served as a Mormon missionary in Taiwan and speaks fluent Mandarin.

Despite serving under Obama as the ambassador to China, Huntsman soon vied for his job, unsuccessfully running for the Republican presidential nomination in 2012. Since then, Huntsman has turned to the private sector, where he currently serves as the co-chair of nonprofit No Labels with former Sen. Joe Lieberman and as the chair of the Atlantic Council.

Prior to his 2012 presidential run, Huntsman was viewed as a “rising star” in the Republican Party, the Washington Post noted, with Obama campaign manager David Plouffe describing him as “the one person in that party who might be a potential presidential candidate.”

Huntsman is regarded as a more moderate Republican, however, which some speculated may have hurt his presidential chances in 2012 as the ultra-conservative Tea Party movement dominated. The politician advocated for civil unions for same-sex couples as Utah governor and urged conservatives to support same-sex marriage in 2013. In 2014, Huntsman penned an op-ed in the New York Times titled, “The G.O.P. Can’t Ignore Climate Change.”

“While there is room for some skepticism given the uncertainty about the magnitude of climate change, the fact is that the planet is warming, and failing to deal with this reality will leave us vulnerable — and possibly worse,” Huntsman wrote.

Huntsman has also had harsh words for the Republican Party in general, characterizing the party in 2009 as “devoid of ideas” and decrying their “gratuitous partisanship.”

“Limited government is important, but I need to make sure that we have a government that actually delivers on issues that people expect us to manage competently and well,” Huntsman said in a 2009 interview with the New Republic.

The politician has also had some strong criticism for the president in whose administration he will soon serve. Huntsman initially endorsed Trump after he became the Republican presidential nominee, saying he would support the candidate despite their “fundamental philosophical differences.” However, he then withdrew his support following the release of the Access Hollywood tapes.

“In a campaign cycle that has been nothing but a race to the bottom — at such a critical moment for our nation — and with so many who have tried to be respectful of a record primary vote, the time has come for Governor [Mike] Pence to lead the ticket,” Huntsman told the Salt Lake Tribune.

Trump has also frequently taken aim at Huntsman, sending a series of tweets criticizing the politician throughout 2011 and 2012. The now-president complained about Huntsman’s dealings with China and discredited him as a presidential candidate, describing him as “lightweight.”

“Jon Huntsman called to see me,” Trump tweeted in February 2012. “I said no, he gave away our country to China!”

By choosing Huntsman to be a part of his administration, Trump has seemingly buried his long-held disdain for the former governor. But though Trump’s press release announcing Huntsman’s nomination lauded his “distinguished career,” the Trump administration still managed to undercut the president’s former foe — by initially misspelling his name.