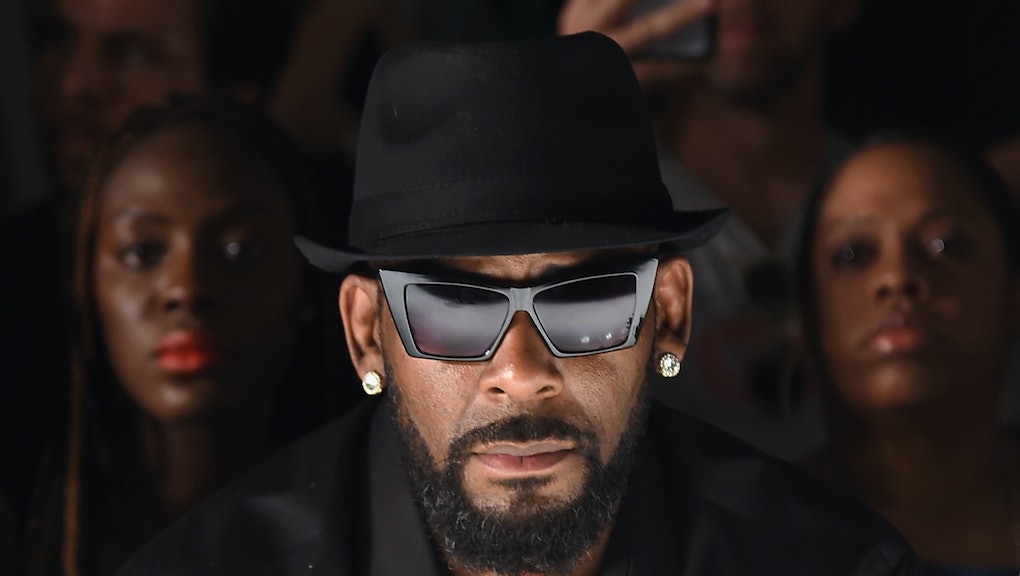 Anytime that I learn that R. Kelly is releasing new music, or that he’ll be appearing at an awards show or that he’s received some other affirmation or distinction in spite of his despicable history, I’m reminded that those who harm black women and girls too often escape accountability, and that our word is rarely enough.

How else to explain Monday’s devastating report at BuzzFeed detailing new allegations of predatory and abusive behavior towards young women by Kelly?

It shouldn’t have come as a surprise to many people, but even just judging by the parents of the women whose cases are featured in the story, the implications of years of reports of Kelly’s behavior escaped many people, if they’d heard about it at all . After all, unless you are an avid consumer of African-American media or the Chicago Sun-Times, it’s perhaps possible that you’ve missed hearing very much about the decades of rumors, allegations, lawsuits, settlements and criminal charges that define, for some of us, the self-proclaimed “Pied Piper of R&B” far more than any of his famous songs ever could.

Kelly’s alleged abuse of underage girls and women has been covered by the likes of the Village Voice, GQ and New York; his behaviors aren’t some deeply hidden industry secret that managed to evade public speculation for years. A popular comedian and a cartoon lampooned on cable television both the infamous video (shared with the press in 2002) that allegedly showed Kelly engaged in a sex act with a 14-year-old girl as well as the 2008 trial over having made said video.

And then there’s also a relatively viral clip from a BET interview conducted months after the trial, in which he addressed the allegations that he had inappropriate relationships with underage girls (“When you say ‘teenage,’ how old we talkin’?”)

But then there’s also the 1994 album by his then-protégé Aaliyah, titled Age Ain’t Nothing but a Number — the cover of which features a 27-year-old R. Kelly creepily standing in the background with his eyes firmly fixed on his young “best friend,” whom he would actually marry that same year. She was 15.

I suppose that the significance of all that might just be too subtle for most people.

Here’s a theory: Some people have chosen to ignore Kelly’s alleged behavior because the victims of it have been black girls. As Jim DeRogatis, the Chicago-based reporter behind the BuzzFeed piece who has tirelessly covered the singer’s off-stage behavior for almost two decades, told the Voice in 2013, “The saddest fact I’ve learned is nobody matters less to our society than young black women.”

There are, of course, plenty of other famous alleged predators in the entertainment industry, like Roman Polanski, Woody Allen and Bill Cosby, whose alleged victims were largely white. The entertainment industry is, in many ways, a disgusting place that will sacrifice young women and girls of any race — and nearly anyone else — in order to protect powerful men. But Polanski, at least, was convicted in 1977 and fled the United States as a result; Allen was investigated for child abuse and excoriated by the judge in his custody trial; and Cosby’s criminal case resulted in a mistrial and he’s paid out who knows how much money in settlements over the years.

Only Kelly was acquitted.

Furthermore, there are some important parallels between Kelly, Polanski, Allen and Cosby: All four have benefitted from the idea of the “casting couch,” or the theory that having sex with influential men is an established method — if not an expected rite of passage — for advancing one’s career in the music, TV and film industries. The permissiveness of parents who allowed their young daughters to be around Kelly and Polanski has often been cited as an excuse for the men’s behavior, as if those men couldn’t be expected to do anything but take advantage of their access to underage girls.

And though Kelly is known for his raunchy lyrics and sexually charged stage shows, Cosby — whose alleged crimes were not widely known for as long as the singer’s were — benefitted from a carefully constructed public image as a moralizer, educational advocate and “America’s Dad.” However, both men have been supported fiercely by some African-American fans who are loath to believe that accusations against powerful black men can be trusted. In this way, the cruel nature of white supremacy has been weaponized against black women and girls to protect the two men.

The truth of the matter is this: Had Kelly been accused of abusing countless white teenaged girls, the coverage of his alleged crimes would likely be inescapable, especially in a 24-hour news cycle. Black women writers, like Mikki Kendall and Jamie Nesbitt Golden, have written articles and used hashtags like #FastTailedGirls to draw attention to not only Kelly’s behavior, but cultural norms that allow black girls to be treated as if they have the sexual agency of adult women in a world in which far too many adults of all races believe that black girls are more “mature” than their peers.

Kendall, Golden and I are all from Chicago, where Kelly was raised and where he was known to hang around local high schools and McDonald’s parking lots, and often observed in conversations with girls that were inappropriate for adult men. When talk of Kelly’s predatory behavior exploded on social media in 2013 around the time of the aforementioned Village Voice article, Kendall shared her own experiences with being accosted by the singer at the tender age of 14 and Nesbitt wrote of witnessing Kelly hanging with “a pretty upperclassman” when he visited her school in the early 1990s (he’d dropped out years prior and was then a rising star over the age of 21).

A few friends of mine claimed to have been approached by Kelly in our hometown when we were just 11 or 12 years old — a decade after Kendall and Nesbitt’s encounters. I’ll admit that I didn’t quite believe them until the story of the tape of the 14-year-old girl exploded a few years later. Even then, it was hard to understand why a rich and famous man would be interested in little girls who looked like little girls; there was no reason to look at them and see anything other than the ages they were. But as Nesbitt wrote in 2013, the rumors had been “in full swing” for many years: Kelly’s alleged penchant for little girls had never been a secret.

Imagine if the people of Chicago had taken those rumors more seriously, or if they hadn’t written them off as lies, or if they hadn’t chalked them up to what happens when “fast-tailed girls” get around grown men. Think about what might have been if DeRogatis’ dogged reporting — going back to 2000 — had gotten broader traction and inspired more reporters to follow the trail of teens behind the R&B superstar.

His fans — many of whom are black women — could have stopped buying this man’s records and attending his concerts, and artists like Lady Gaga and Jennifer Hudson (herself from the South Side of Chicago — come on, sis) could have not collaborated with him years after that infamous tape. Dave Chappelle and Aaron McGruder might not have reduced the tape and the trial to fodder for jokes that served to mitigate the seriousness of the accusations against Kelly. Perhaps, if any of that had gone differently, we wouldn’t be reading allegations of a Kelly “sex cult” in 2017 and seeing press conferences of worried parents.

It’s easy to point an accusatory finger at the parents interviewed by BuzzFeed and ask why on earth they’d allow their children to be around this man; I have those questions (and many more for them) myself. However, considering that the singer somehow managed to escape any serious consequences in a courtroom or in the court of public opinion, it isn’t impossible to believe that those parents convinced themselves that Kelly wasn’t actually guilty.

After all, black girls and women have been the alleged victims of his crimes, and our word is never enough.