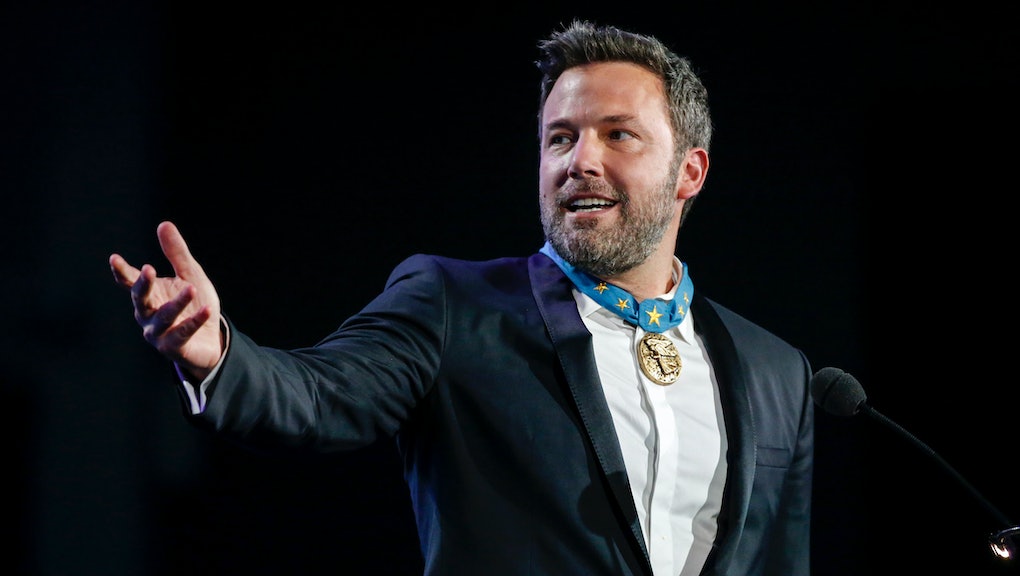 How much can a 44-year-old man be held accountable for what he said at 24? That’s the question on my mind today, as comments actor and director Ben Affleck made on the set of the 1997 film Chasing Amy come back to haunt him.

Director Kevin Smith screened his boy-meets-bisexual girl romcom Chasing Amy at Los Angeles’ Outfest LGBTQ film festival Saturday, where he reportedly relayed what Affleck said on set 20 years ago about his man-on-man kissing scene. During the filming of Affleck’s kiss with co-star Jason Lee, Smith recalled the actor saying, “A man kissing another man is the greatest acting challenge an actor can ever face.” After it was over, Affleck called himself a “serious actor.”

This tracks closely with what he told Entertainment Tonight in 1997, where he questioned exactly how well he had done in the kissing scene. “I’m not homophobic,” he said. “I guess I am more than I thought, in that, it was just difficult for me, you know? And I didn’t think it would be. I really backed down from it in a way. I really could have done more of a committed job.”

The scene has haunted Affleck for years — he even expressing regret for his performance in a 2012 New York Times profile in which he said he “blew it” and it was “not [his] proudest moment.” Said profile also gives us a little insight into where this newly reported quote about being a serious actor comes from. According to the Times piece, Affleck heard peers of his say before that “you were a really great actor if you could convincingly play homosexual as a man.”

So what we have is a 20-year-old quote, delivered by an inexperienced Affleck and clearly influenced by others’ expectations. If he’s expressed regret for how he handled the situation, we can safely call this a non-controversy, right?

Not quite! In the days after the quote resurfaced, Affleck came under fire. Popsugar said they were “raising [their] collective eyebrows” at the quote, while NewNowNext related Affleck’s quote to the “larger problem in Hollywood where straight male actors feel entitled to certain accolades for ‘bravely’ portraying LGBT characters.”

No one came down as hard, however, as Westworld actress Evan Rachel Wood did on Tuesday. In a now-deleted string of tweets captured by Refinery29, Wood blasted Affleck’s comments, saying, “Try getting raped in a scene. Also, grow up Ben.” When someone tried to point out the age of the quote, her response — “I’m sure he just thought it was a funny, but even jokes like that are damaging” — indicated she may not have understood the context.

Wood eventually deleted the tweets early Wednesday morning, citing not the age of the quote, but the “sickening” responses she was receiving for her tweets.

Certainly, hateful tweets in response to Wood’s opinions are unacceptable. And no matter what way you cut this particular secondhand quote, it’s not a great look for Affleck. But Wood’s response is a microcosm of outrage culture: Wood saw the quote, likely without understanding its age or context, and reacted. Suddenly, she and other critics created a 2017 backlash to a 1997 controversy — one that Affleck has already expressed regret about, which you could learn from a simple Google search.

It’s easy to be caught up in a moment and react to something that sounds stupid, because a lot of people in Hollywood do say some outrageously dumb things. (Remember when Affleck’s best friend, Matt Damon, explained diversity to Effie White, a black, female producer, on Project Greenlight?) But that’s all the more reason to be cautious: There are enough worthy controversies out there. No need to resurrect those that are dead and buried.