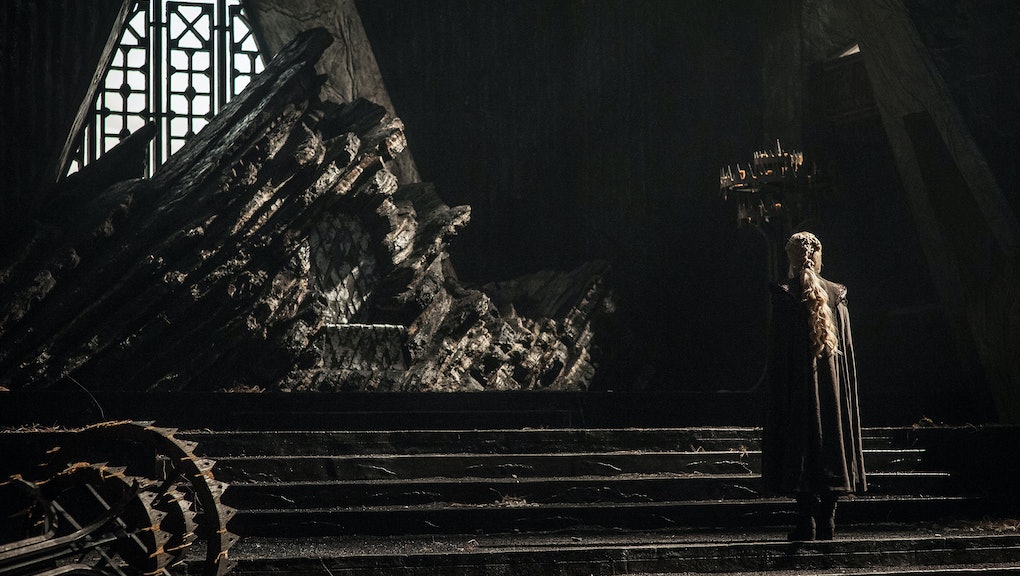 ‘Game of Thrones’: We talked to historians and a military expert about who will win the Iron Throne

Throughout its six season run so far, the battles on HBO’s Game of Thrones have remained surprisingly faithful to medieval history. The show’s directors have modeled their drama after real-life clashes between civilizations — elements of season six’s Battle of the Bastards, for example, were based upon a battle between English and French forces in 1415, as well as a standoff between Carthaginian general Hannibal Barca and the Romans, in 216 B.C. But even if the Thrones creatives are drawing on history, they’re still dealing in fantasy.

“Look, Dany’s got dragons,” Kelly DeVries, professor of medieval history at Loyola, said in a recent phone interview. “If they work the way they’re supposed to, she wins. Because there’s just no way to beat a dragon [laughs] — I’m sorry I have to laugh at that, I didn’t think I’d ever be saying that in my entire career.”

Those 757-sized monstrosities have made the Targaryan Queen a far and away favorite to claim the Iron Throne. But there are still other factors at play that could favor the show’s other major armies — the current ruling family, the Lannisters, and Jon Snow’s Northern forces. To try and predict how the race for the Iron Throne is likely to turn out, we consulted two historians and one military expert.

To figure out how much of a shot the various factions have, we have to start with a headcount. Thrones has been good with representing accurate numbers and troop movements until now, DeVries says. The creators behind the show are students of history. Based on the size of each of the armies, Dany definitely has a numerical advantage against the Lannisters and the Northerners. A quick breakdown.

Dany’s army: A Zimbio post — building off of estimates from the Ringer’s foremost Thrones fanatic, Jason Concepcion — offers a headcount of 148,000 between Dany’s Unsullied and Dothraki forces. Add to that the Tyrell army (now sworn enemies of the Lannisters, totaling 80,000), the Martell army (pretty much always sworn enemies of the Lannisters, totaling around 20,000) and the Greyjoy rebels loyal to Captain Yara (totaling 3,000 soldiers and 100 ships), and we get a grand total of 251,000. Factoring in the ships lent by the Martells and the Tyrells, Business Insider estimates that Dany commands a fleet of 350 ships.

The Lannisters: They’re feeling a bit lonely right now, commanding around 60,000 men, as Tywin Lannister ballparks it for Jaime in season two. But they have a potential ally in Euron Greyjoy, who’s supposedly commanding as many 1,000 ships — or, at least that’s the number he commanded his men to build in season six. Whether or not its logistically possible to build a fleet of that size in the show’s allotted timeline is another story — but let’s give Euron the benefit of the doubt, despite every indication that he’s not to be trusted.

The North: According to Zimbio, the Northerners make up a force close to 36,500 — that’s including House Stark and its bannermen, the Wildlings and the soldiers of House Arryn.

“The size of the army isn’t everything that counts — there’s also the quality of leadership, and perceptions of legitimacy.“ — Helen R. Castor

How size plays out on the battlefield

“When it comes down to it, there were never enough troops, there were never too few — you took [the enemy] on no matter what,” said DeVries, who was interviewed for a season-five Thrones DVD feature called “The Real History of Game of Thrones.”

“On paper, Charlemagne probably could put up 100,000 troops, but he never took the whole army into battle. [If he had, he] would have denuded his borders,” Devries said. “The Roman army, the same way. Even if we look at the 100,000 in the Crusader army, by the time they get to Constantinople, they were whittled down to 75,000. By the time any of the major conflicts occurred in the Holy Land, we’re down to 25,000 — that’s disease, faint-heartedness that divides the forces and sends them home.”

Helen R. Castor, historian of medieval England at the University of Cambridge, agreed in an email that there are other elements at play in a battle: “The size of the army isn’t everything that counts — there’s also the quality of leadership, and perceptions of legitimacy (i.e. which side the general population is actually prepared to take risks for).”

Some of the houses that have yet to pick a side in this conflict might be less likely to ally with Dany, according to Paul Meagher, a lieutenant colonel in the U.S. Marines. “Cersei’s [public relations] campaign would be ‘They’re Targaryan invaders, they’ve got Dothraki hordes with them, these are not Westerosi, they’ve got an army of eunuch slaves,’” Meagher said over the phone. “Playing up Dany’s foreigners, as a way to inspire loyalty in good, pure-hearted Westerosi. That’s the tact in real life that someone in her position would take.”

Winter and the other intangibles

After six seasons, winter has finally arrived in Westeros, and it could pose the most trouble for Dany’s allies. They’ll be facing freezing temperatures and cutting winds sweeping down from the North. (Everyone on the show has to worry about the nearly death-proof White Walkers along with the weather, but let’s leave them out of this equation because our experts can’t realistically account for an entire army of ice zombies).

If Dany’s dragons are somehow unable to immediately melt the walls of Kings Landing, they may be in for a very long siege outside those walls, which may put them at the mercy of the elements. (Aegon Targaryen’s dragon, Balerion, melted the walls when they attacked Harrenhal some 200 years before the events of the show, but that dragon was significantly larger than Dany’s.) Winter is working its way south, and if history repeats itself, it will bury all of Westeros under dozens of feet of snow.

“Up until the early modern period, armies generally did not fight in winter,” Meagher said. “Besides some light skirmishing and reconnaissance, you didn’t see major engagements during the winter. And that’s just the weather becomes a greater enemy than anything the enemy can actually do to you. It limits your mobility. You have much higher supply consumption, you have to consume that many more calories just to keep warm.”

“Dany’s being cautious, that’s just smart. That’s what any general is. That’s an Eisenhower, an Alexander the Great, Julius Caesar.”

Even if “the Tyrells have the grain and the Tyrells have the livestock,” as Jaime notes in the first episode of season seven, are there enough calories in Westeros to keep three dragons and a 200,000-plus-person army — the bulk of which have lived their entire lives in Essos’ blistering heat — warm? We’ll find out soon enough. What is clear, though, is that the Northerners are well-suited to extreme cold.

“In this respect, Northern-raised forces obviously have some advantage, because that’s just what they call living,” Meagher said. Dany may want to satisfy all that speculation that she should team up with Jon Snow. At the very least, she’ll want to learn from him about how to survive a Westerosi winter.

“All-out battles between well-matched fleets are actually pretty rare, but when it does happen, the results usually are war-winning.” — Paul Meagher

Controlling the sea will be key

If Euron actually is commanding a navy of 1,000 ships, and does end up finding a “gift” that will convince Cersei he’s worthy of joining the Lannister dynasty, he might be the fair-haired family’s only hope of leveling the playing field.

“All-out battles between well-matched fleets are actually pretty rare, but when it does happen, the results usually are war-winning for the side that wins the sea battle,” Meagher explained. “For example, the only major fleet engagement in the first World War was called the Battle of Jutland. It was the British fleet and the German fleet. Both sallied forth at the same time. They both knew that if they won, they could win the war in a day, but if they lost, they could lose the war in a day, because the side that still had a fleet at the end of it would be able to control all the action on land afterwards.”

Dany ostensibly has a third of Euron’s navy, and, assuming the Lannisters have some ships of their own (they did send some out during the Battle of the Blackwater), Dany could be further outnumbered. A loss at sea could strand Dany with no real way to deploy her troops from Dragonstone and leave any camps and supply lines she would’ve set up elsewhere in Westeros vulnerable to raids.

Still, for all this talk about sea battles, Dany’s still got her fire-breathing trump cards: her dragons. We’ve already seen how devastating they can be to an unprepared navy. — they basically wiped out the Slaver’s Bay navy in a single hour.

If Dany does deploy her dragons, that comes with its own intangible risks, as other military theorists have pointed out. If she wins the Iron Throne, she’ll eventually have to rule over all of the castles she burns on her path to victory, and all of the families that would’ve lost loved ones to her dragons. That poses some problems.

“The Israelis have found that if you start dropping bombs out of the sky from drones, the psychological impact it has is that it drives your adversary into rage. Because they cannot respond,” Brigadier Roly Walker, head of strategy for the British army, wrote for the Guardian in 2016, discussing the pros and cons of dragon combat. “And then that rage manifests itself in other ways. It may drive people into suicide bombing. The more you learn about a weapon that may be great, the more you have to think long and hard about how to use it.”

As the numbers suggest (and, again, this is leaving out the threat of the White Walkers), Dany might be able to conquer Westeros without even using dragons. She’ll simply have to rely on her strengths as a tactician and leader. Her cold, methodical “Shall we begin?” at the end of season seven’s premiere suggests that she wants to do this right. She’s not going to try and bully her way through the continent, relying on pure, blind devastation.

“Dany’s being cautious, that’s just smart,” Devries said. “That’s what any general is. That’s an Eisenhower, an Alexander the Great, Julius Caesar, pretty much any general who wins. It’s just, ‘Take your time.’ You’ve got time, no one’s going to pressure you into doing anything. She’s been good about that, and she’ll likely continue to be.”