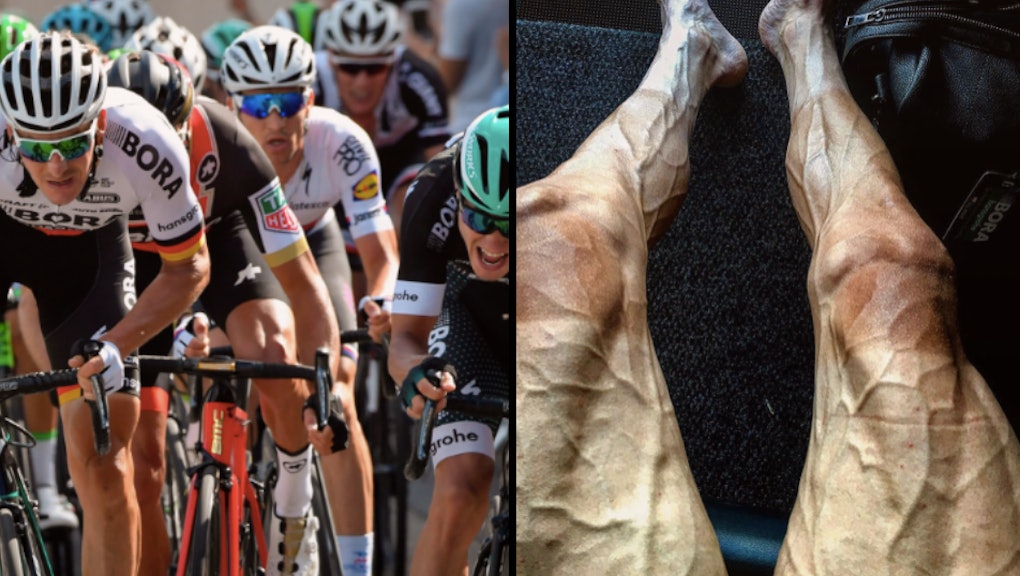 It wasn’t long after Pawel Poljanski shared a Tuesday Instagram photo that fans bombarded the Tour de France cyclist with serious concerns about his health.

“After sixteen stages I think my legs look little tired,” Poljanski wrote alongside the image.

While a number of commenters apparently found the photo alarming, experts say that legs like Poljanski’s aren’t uncommon among elite athletes — in fact, they’re expected.

Poljanski’s Instagram showed the cyclist’s legs stretched out in front of him, with his veins prominently bulging-out from thigh-to-toe and his knees looking sunburnt. While the appearance of Poljanski’s legs may seem unusual to some, Heather Milton, a senior exercise physiologist at the NYU Langone’s Sports Performance Center, said they’re actually normal for an athlete like him.

“When I look at at that [photo], what I’m seeing is somebody who is extremely fit and has a low body fat percentage,” Milton said in a phone call on Wednesday. “His veins are all dilated to maximize blood flow.”

For an elite athlete like Poljanski, a low body fat percentage makes the veins more visible. Intense exercise — especially in the heat — makes them dilate, in order to deliver more oxygen to the muscles and help carry away waste product that muscles create during exertion, Milton said.

The body’s process of creating new blood vessels and dilating existing ones in order to maximize the oxygen getting to the muscles is called neovascularization, Dr. Benjamin Domb, an orthopedic surgeon who specializes in sports medicine, said in an email on Wednesday.

Noting the “incredible prominence” of Poljanski’s veins, Domb said the cyclist’s training would create the neovascularization in his body, and the race would exacerbate it: “When Pawel completes the Tour de France, every blood vessel in his legs — both arteries and veins — has dilated to its maximal capacity,” he said.

Poljanski’s cycling team, Bora-hansgrohe, did not immediately respond to Mic’s request for comment.

According to Milton, Poljanski’s veins are likely more prominent than usual because he’s in the middle of the Tour de France, but for an athlete like him, his veins probably stand out all year round, although it’s likely not as “dramatic.”

“I don’t think it’s unusual,” Milton said of Poljanski’s Instagram photo. “It would be almost expected.”

During or after an ongoing endurance event like the Tour de France, athletes might experience other physical effects, like shaking or “dead legs” that feel heavy or fatigued, Milton said. Those can be minimized with specialized training.

Poljanski’s veins likely won’t look like that forever, she added: “Arteries and veins are very compliant when you’re healthy ... as he gets older, if he does gain more body weight, those veins won’t be as prominent.”