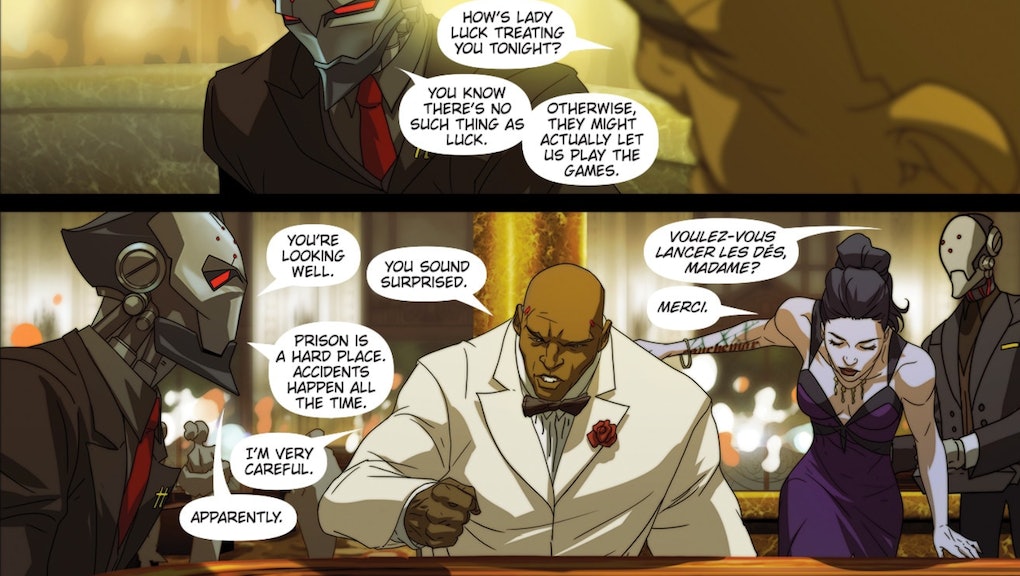 The official release of Doomfist on the live Overwatch servers is still a few days away, but Blizzard just released a brand-new Doomfist-centric comic titled “Masquerade” on its website. In addition to showing Doomfist’s rise to power within the terrorist organization Talon, it also introduces a mysterious new Omnic villain named Maximilien.

The comic opens with Doomfist’s escape from prison, meeting with the other members of Talon and working to re-establish his power. He and Widowmaker travel to a casino in Monaco to meet with a Talon operative named Maximilien, who’s identified as some kind of funding source.

Before long, it seems another Talon leader named Vialli sent a group of thugs to take Doomfist down, but he and Widowmaker have no problems handling themselves. Then, in the next scene, Doomfist throws a mysterious man — presumably, this poor Vialli fellow — off a rooftop to his death.

Overall, the comic itself doesn’t contain any massive, world-shaking revelations like the one in the Winter Wonderland “Reflections” comic, but it offers an interesting look at the group dynamics and leadership structures within Talon. Notably, that the other members of Talon don’t trust Sombra or believe her to be loyal — which they very well shouldn’t.

Also, there are some really sweet masquerade-style costumes that would make for incredible skins. The comic is available for free on Blizzard’s site. You can also watch the animated version on Madefire.