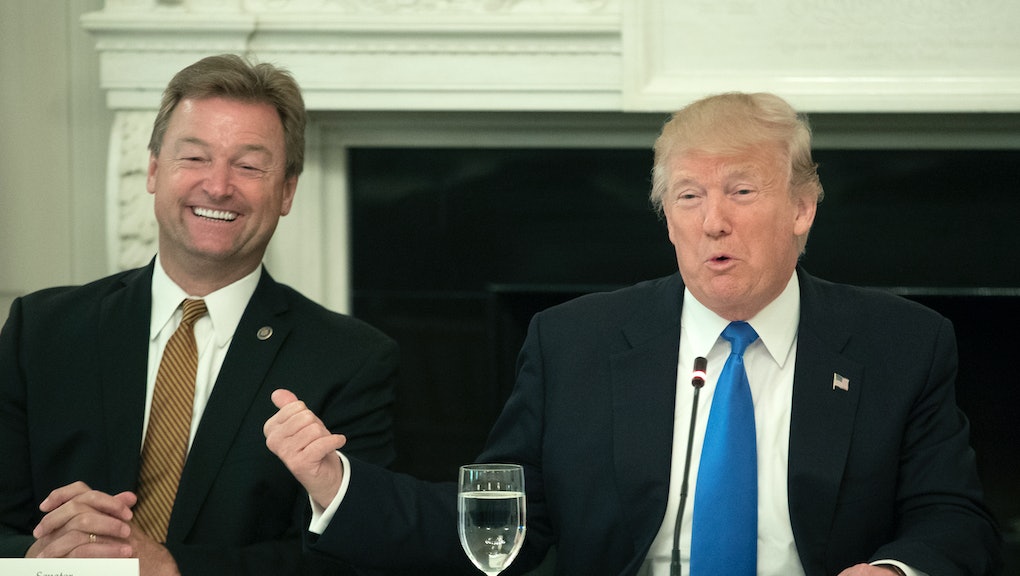 Trump to GOP sens. who defected from health care bill: They “might not be [here] very much longer!”

President Donald Trump had lunch with Senate Republicans at the White House in an effort to revive their floundering health care reform bill, going as far as threatening the GOP members who have wavered on whether they would vote for the plan.

“You weren’t there, but you’re going to be,” Trump said to Sen. Dean Heller, the Nevada Republican who refused to back the first version of the Senate health care bill and remained mum on whether he’d support subsequent revised versions.

“Look, he wants to remain a senator doesn’t he?” added Trump, whose allies ran ads against Heller in his home state, criticizing him for not supporting the health care bill’s initial version that failed in June.

Heller is the only Republican senator facing re-election in 2018 in a state Hillary Clinton won in the 2016 presidential election.

Heller wasn’t the only GOP senator on the receiving end of Trump’s threats. Sens. Mike Lee of Utah and Jerry Moran of Kansas — two of the Republican senators who killed the second draft of the bill Monday night — also drew Trump’s ire.

“Here you are,” Trump said after searching for Lee and Moran in the room. “It might not be very much longer,” he joked, referencing their political futures.

Aside from roasting Senate Republicans, whom he needs if he wants to achieve a signature campaign promise of repealing the Affordable Care Act, Trump once again moved the goalposts for what he wants to see in a health care bill. Over the last week alone, Trump has taken many positions on the Republicans’ path forward.

After the second version of the health care bill failed Monday, Trump said Republicans should just repeal the ACA now and replace it later.

On Tuesday, after plans for a repeal-only bill died, Trump said Republicans should just let the ACA “fail” and then wait for Democrats to come to Republicans for help.

He changed his mind again Wednesday, saying Republicans should repeal and replace the bill and not leave Washington, D.C., for the August recess until they do.

“People should not leave town unless we have a health insurance plan, unless we give our people great health care,” Trump said. “We’re close, very close. We have to hammer this out and get it done.”