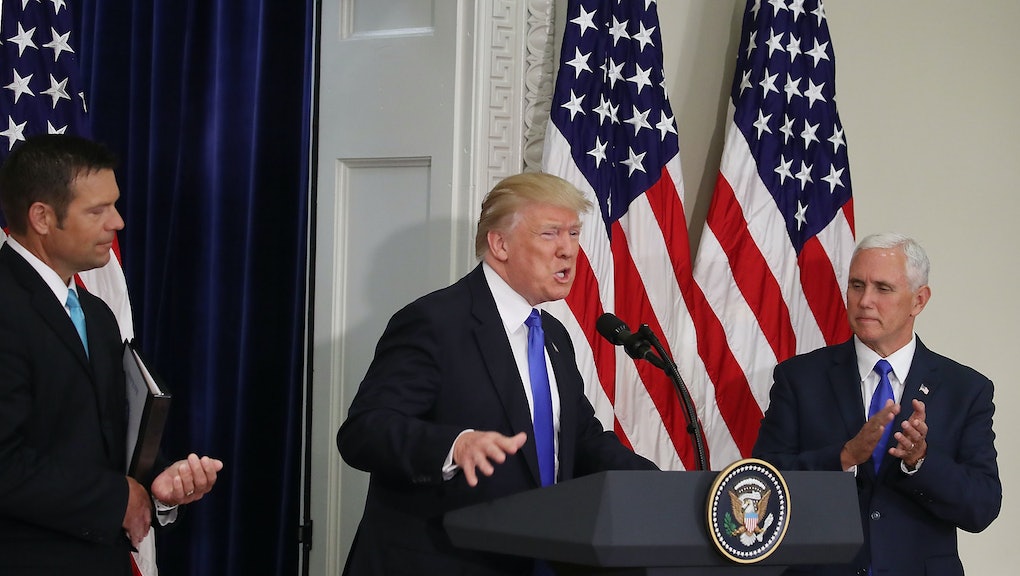 “This commission has no preconceived notions or preordained results. We’re fact-finders,” Pence said as the cameras rolled. “And in the days ahead, we will gather the relevant facts and data, and at the conclusion of our work, we will present the president with a report of our findings.”

But mere moments after President Donald Trump — whose in-person appearance was announced last-minute — stepped to the lectern, he veered away from those hard facts Pence cited and back to his long-standing insinuations that the U.S. election system is somehow rigged.

“I’m pleased that more than 30 states have already agreed to share the information with the commission,” Trump said, alluding to election officials’ hesitance to provide the panel with all the data it has requested on every registered voter in the country.

“If any state does not want to share this information, one has to wonder what they’re worried about. And I asked the vice president, I asked the commission, ‘What are they worried about?’ There’s something,” Trump said. ”There always is.”

The bipartisan panel of election administrators and researchers convened at the Eisenhower Executive Office Building amid continuing legal challenges and protests both online and outside the White House.

Trump created the panel after months of alluding to widespread improprieties in the 2016 vote, although he never provided conclusive evidence.

Even after defeating Hillary Clinton — in the Electoral College, not the popular vote, although panel vice chairman Kris Kobach earned a few double-takes with a post-meeting remark about that — Trump carried his insinuations about fraud right into Wednesday’s meeting.

The president did insist there would be no foregone conclusions or secrecy about the panel, calling the proceedings “a very transparent process.”

But Trump also told the room about alleged “voter inconsistencies and irregularities” he said “people” told him about having witnessed.

“All public officials have a profound responsibility to protect the integrity of the vote,” he went on. “We have no choice.”

The panel settled down to business after the president left, with a few more assurances from Pence that appeared aimed at critics who say the project is only meant to help Kobach and his fellow conservatives steer the country toward stricter voting laws that could lead to disenfranchisement.

“Let me reiterate the point I made earlier, now that we’re on the record: We have no preconceived notions or preordained results,” Pence repeated.

Kobach and other panelists with reputations for espousing a hard line on fraud, including J. Christian Adams, Hans von Spakovsky and Ken Blackwell, collectively dubbed the “four horsemen of suppression” by their foes, seemed to take some pains to knock down their naysayers.

“Clean elections protect our freedom,” Adams said, adding that no “serious, inquisitive American” would want to dodge legitimate questions about weaknesses in the system. “There are ways to examine and reach the truth about our elections without harming a single legitimate voter registration.”

Still, as the Los Angeles Times put it, “Nearly every credible study has concluded that voter fraud is either nonexistent or too small to affect election outcomes.”

Von Spakovsky, a lawyer for conservative think tank the Heritage Foundation who has been cited as a particularly zealous proponent of requiring voters to present photo identification at the polls, went the personal route.

With a mother who grew up in Nazi Germany and a father who escaped Russian communism, he said, “we were taught as children that the right to vote is a very precious right; it’s one that can be easily lost.”

Von Spakovsky lamented that some panelists have been “subjected to vicious and defamatory personal attacks” by those who seemingly want to equate a battle against fraud with a deliberate attempt to keep qualified people from casting ballots.

Later, von Spakovsky told Mic that fears about a panel that has no authority to make or change laws are overblown: “All these critics that are going crazy about this commission ... It’s an advisory commission. It has no executive power of any kind.”

Across the aisle, Democratic Maine Secretary of State Matt Dunlap stressed that “no one who has spoken, including the president, has questioned the legitimacy of the outcome of the 2016 election.”

What are the balance points between security and access? ... I think that anything that we do to answer those questions, to reassure people that there are no goblins under the bed, and if there are, we deal with them in a way that is balanced, again, towards access of the voting public to participate in their government. This is not ours. It belongs to [the public].

The panel broadly laid out a slew of topics it might choose to investigate, ranging from non-citizen voting to cybersecurity to double-registered voters, suppression and automatic voter registration.

After the meeting wrapped, Kobach told Mic that the public should “absolutely not” be concerned that any voter data the panel collects would be mishandled.

The panel suggested holding at least some future meetings outside Washington, D.C., so as to allow for more public comment — which was only accepted in writing for the livestreamed first gathering.

Except for the press, the meeting participants and a few members of the Trump administration, the rows of chairs in the meeting room on Wednesday were filled largely with neatly dressed people who appeared younger than the rest of the attendees.