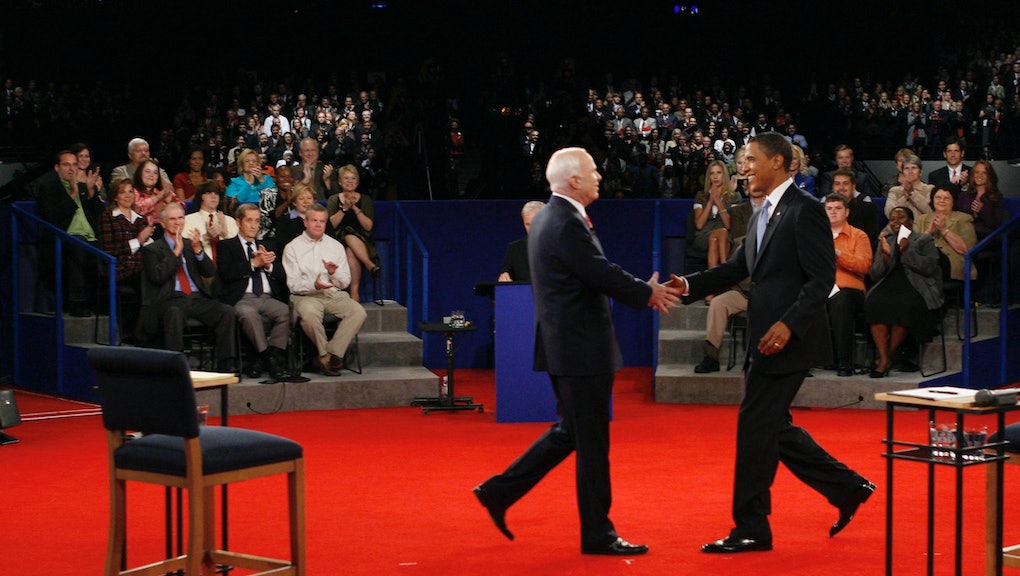 After news broke Wednesday that Sen. John McCain (R-Ariz.) had been diagnosed with brain cancer, a video began circulating on Twitter. In the video, McCain is seen at a campaign stop in Lakeville, Minnesota, in 2008, when he was running for president of the United States. McCain fields two questions from skittish white audience members about his opponent, then-Sen. Barack Obama.

“I got to ask you a question,” a second audience member adds. “I can’t trust Obama. I have read about him, and he’s an Arab.”

McCain’s responses to these comments seem startlingly decent after a 2016 presidential campaign that was defined by its vitriol. Where candidate Donald Trump seemed to relish any opportunity to smear his opponents — and often personally, rather than politically — McCain seems intent on defending Obama.

“I want to be president of the United States,” McCain tells the first audience member, “and obviously I do not want Senator Obama to be. But I have to tell you, he is a decent person and a person you do not have to be scared [of] ... If I didn’t think I wouldn’t be a heck of a lot better president, I wouldn’t be running, OK? And that’s the point.”

The post, shared by journalist Yashar Ali, has amassed several thousand retweets as of Thursday morning. Its caption reads, “Reminder: When Sen. McCain was running against Sen. Obama he repeatedly defended his honor and shut down conspiracy theories. As it should be.”

Ali’s implication is that McCain was an especially decent candidate — particularly by today’s standards. But McCain’s responses require context. As a New York Times story from that evening attests, McCain’s campaign was defined as much by its fear-mongering toward candidate Obama as it was about defending him.

The Times story describes how, shortly after replying to the comments in Minnesota, McCain went right back to attacking Obama over his affiliation with 1960s radical Bill Ayers, a former member of the Weather Underground. McCain went so far as to claim that “Mr. Obama’s political career was launched in Mr. Ayers’ living room.”

Earlier that same week, McCain released an Ayers-themed attack ad against Obama, accusing him of fudging the truth and palling around with terrorists. That McCain could veer so dramatically from calling Obama a liar and terrorist-affiliate to a “decent person” who voters should not be scared of reflected the “confused” nature of his campaign, the Times wrote.

At the time, the McCain camp was facing a crisis. Obama was surging in the polls, and conservative supporters were urging McCain to “fight back.” His public appearances with his running mate — then-Alaska Gov. Sarah Palin — seemed to reflect these demands. The duo faced frequent criticism for “pumping up” angry crowds and failing to condemn their supporters’ more hostile behavior.

The Times reported that McCain-Palin rallies in Pennsylvania and Wisconsin featured attendees yelling “off with his head” (referring to Obama), and that someone shouted, “Kill him!” at a Florida campaign event. An African-American news cameraman was reportedly attacked with racial slurs at the same Florida gathering. These examples seem tame compared to what we saw at Trump rallies over the past year and a half. But a similar degree of vitriol was present nearly 10 years ago.

Respondents to Ali’s tweet also criticized McCain’s response to an audience member’s allegation that Obama was an “Arab.” Many saw McCain’s reply — ”No, ma’am, he’s a decent family man [and] citizen” — as implying that being “Arab” and a “family man and citizen” were mutually exclusive. It’s unclear if that’s what McCain meant, though his wording leaves too much wiggle room for comfort. Either way, between that and the senator persistently linking Obama to terrorism and untrustworthiness, it’s hard to find much to celebrate in this video.

It’s no surprise that people should feel compelled to rehabilitate McCain’s past today. He was just diagnosed with a deadly disease. To reflect on anything but his best moments seems impolite and unnecessary. But McCain’s cancer diagnosis can be tragic without requiring history to be re-written. We do not need to be dishonest about who he was or what he did. Perhaps instead, we can pay tribute to McCain by seeing him as the imperfect human being he is, rather than treat him like something he was not.