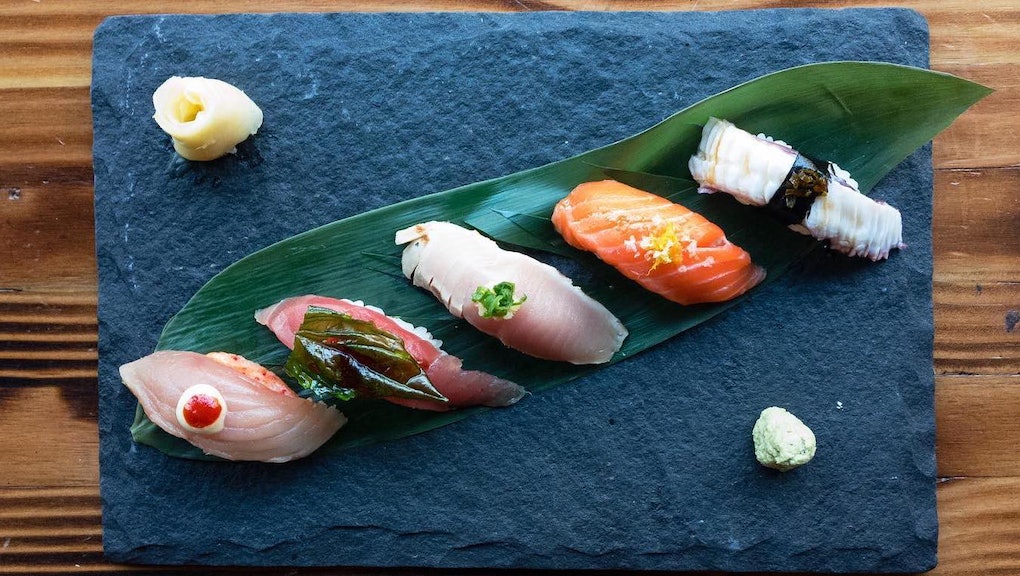 Should any piece of sushi take five flights? A restaurant group takes on the future of fish

When you eat an intoxicatingly fresh piece of sashimi, you’re probably not focused on how raw fish contributes to climate change. Yet the particular species of fish we eat — and the miles they’re shipped or flown to get to your plate — impact the environment in a big way.

That’s why Kristofer Lofgren, the founder and CEO of the Sustainable Restaurant Group (with sushi restaurants in Portland, Oregon and Denver), tasked his company with a formidable mission: to measure its carbon emissions. Since it was founded in 2008, the restaurant group has served fish sourced from sustainable populations, but it wasn’t until 2017 that the team decided to take its environmental commitment to the next level by calculating its exact carbon emissions.

“You can’t change what you can’t measure,” Lofgren said in an interview, noting his team joined forces with Blue Star Integrative Studio, a planning and architecture firm that audited the group’s supply chain and business practices. The group wanted to be transparent with consumers, so anyone can view the their carbon report card displayed on this interactive website.

The audit provided insights about which fish items on the menu were the worst offenders when it comes to carbon emissions.

“We had a yellowfin tuna that took five plane flights from the Philippines and Micronesia,” Lofgren said. “We looked at it and went, ‘Okay, where can we find hand line-caught tuna for the same price or less?’

So Lofgren and his team found a team of people in Hawaii who are fishing Bigeye — a fish with a meatier flavor. “The fish is technically much more expensive but ultimately, it’s a better product,” Lofgren said, noting that the fish is directly shipped to the restaurants. The Bigeye tuna is served in a $14 poke bowl at QuickFish Poke Bar, SRG’s fast casual poke shops in Portland, Seattle and Denver.

Before its audit, the Sustainable Restaurant Group was already practicing green techniques, including composting, recycling, using renewable energy sources, using low flow and low energy toilets and purchasing carbon offsets, which means investing in programs that reduce carbon in the atmosphere. But roughly 60% to 80% of a restaurant’s total carbon emissions come from food rather than its operations, according to Elizabeth Singleton, executive director of ZeroFoodprint, a nonprofit organization agency that helps restaurants understand their carbon emissions. ZeroFoodprint did not work with the Sustainable Restaurant Group, but it does work with Michelin-star restaurants like Noma and Amass in Copenhagen, Denmark.

“It’s a matter of everything it takes to grow, harvest, package and transport the food to the restaurant,” she said. Animal proteins, especially conventionally raised beef and lamb, tend to have the highest amount of emissions, she noted.

Tataki Sushi Bar, a sustainable restaurant in San Francisco, also sources Bigeye tuna instead of other “popular species,” Casson Trenor, co-founder of Tataki and author of Sustainable Sushi: A Guide to Saving the Oceans One Bite at a Time, said in an interview.

Bigeye tuna is the only fish on the menu that takes a plane to Tataki — all other species (including everything from local California Halibut to New Zealand Snapper) come to the restaurant by truck or boat.

“We’re not going to order exotic fishes and staples like farmed salmon, hamachi or unagi,” Casson said, explaining these species come with questionable fishing practices or they’re borderline endangered species, like unagi. His team focuses on the ingredients that fit their values — like halibut caught off the coast of California — and use them to the best of their ability. They’ve attracted a clientele that “vibes with this approach,” he said.

According to Singleton, preliminary market research shows that restaurant patrons care about what their dinner is doing to the environment, and they’d be willing to put their money where their mouths are.

“Eighty percent of respondents would be willing to pay $1 or more for their restaurant meal to be carbon neutral,” Singleton said of her market research, noting that the true cost of a restaurant becoming carbon neutral — meaning they’d analyze their emissions and invest in sustainability practices and carbon offset programs — would be a mere 25 cents per customer. Singleton emphasized that the cost would be even less for a fast-casual restaurant.

When it comes to sushi, Casson said consumers should broaden their horizons and not expect the same rolls and sashimi at every restaurant. “Fish are not manufactured. Why should they be available all around the world, all times of year?”

The key: Sustainable restaurants should experiment with sushi traditions. To replace unagi served in sweet sauce at the end of a meal, Casson said Tataki uses sablefish, a black cod, and Bamboo Sushi, a Sustainable Restaurant Group property, uses catfish and eggplant.

“It needs to be a dynamic approach based on shared principles,” he said.