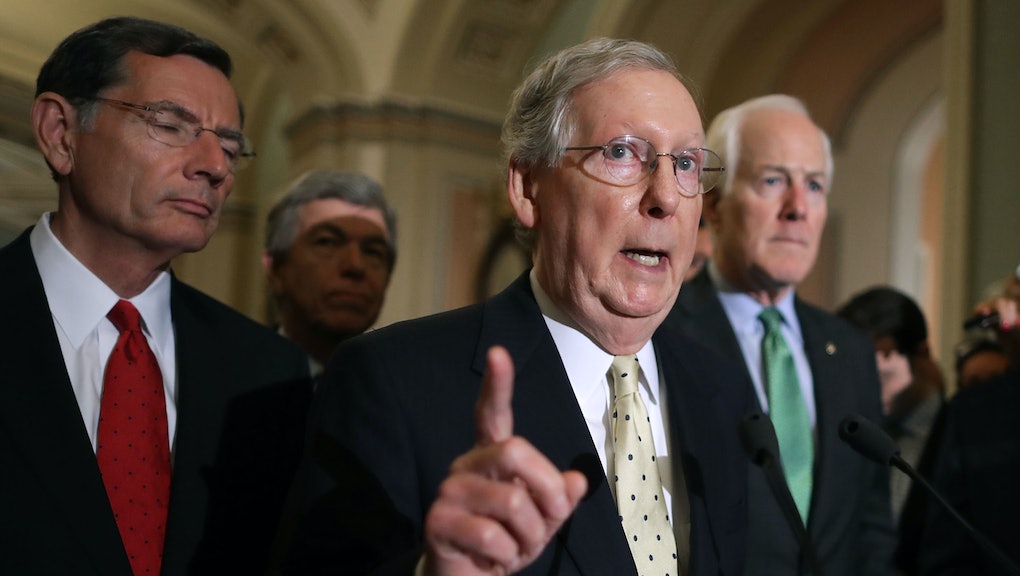 A revised version of Senate Republicans’ Better Care Reconciliation Act did nothing to increase the number of people with health insurance, the nonpartisan Congressional Budget Office said Thursday, with the plan still leaving 22 million more people uninsured over the next decade.

Senate GOP leadership amended the BCRA after a revolt from Republican senators.

But the CBO said the revised version of the bill did little to change the underlying problem: The bill would lead people to lose their health care coverage and increase costs for certain subsets of the population.

Passing such a plan would break the GOP’s seven-year promise to repeal the Affordable Care Act, better known as Obamacare, and replace it with a plan that would lower costs and offer more options.

“Under this legislation, for a single policyholder purchasing an illustrative benchmark plan ... in 2026, the deductible for medical and drug expenses combined would be roughly $13,000,” the CBO said in its report, effectively blowing through rules that set limits on out-of-pocket costs for compliant plans. “Because a deductible of $13,000 would be a large share of their income, many people with low income would not purchase any plan even if it had very low premiums.”

The latest CBO score did not take into account an amendment proposed by Sen. Ted Cruz (R-Texas). That amendment would allow insurers to sell plans that do not comply with ACA regulations — such as covering basic things like prescription drugs, hospitalization and preventative care — so long as insurers offer at least one compliant plan.

Experts say the amendment basically amounts to a high-risk pool, forcing those with pre-existing conditions to purchase more expensive ACA-compliant plans while offering cheaper plans that cover very little to currently healthy individuals. Those cheaper plans, however, would have higher deductibles, resulting in higher out-of-pocket costs should someone with one of those plans actually get sick.

Senate Majority Whip John Cornyn told reporters the bill would likely be put up for a vote on Tuesday.

It’s unclear whether this plan will garner the 50 Republican votes needed to pass.

That math is further complicated by Sen. John McCain’s brain cancer diagnosis. It’s unclear whether McCain will be able to return to Washington, D.C., in time — and if he doesn’t, Republicans can only afford to lose one GOP vote.