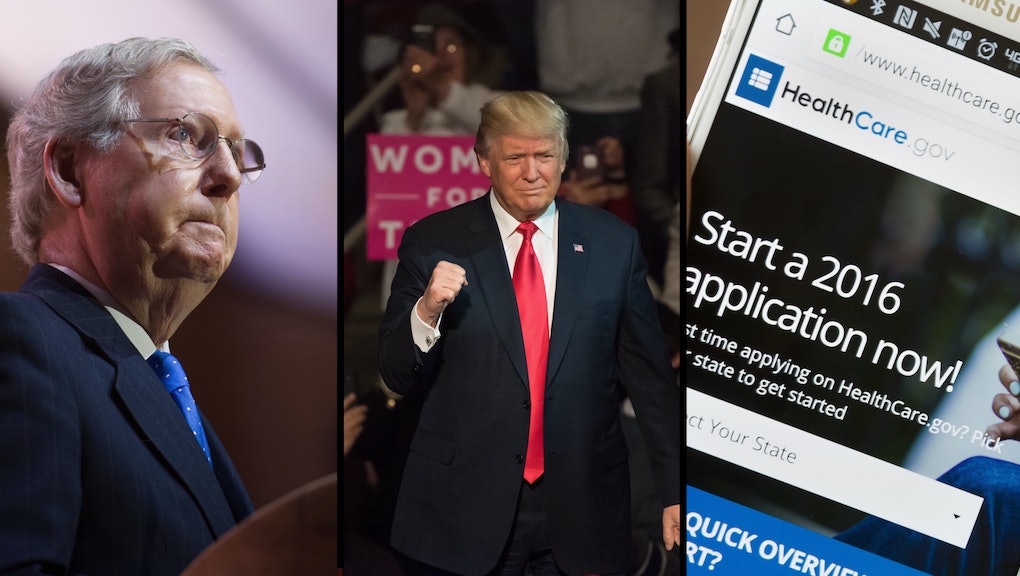 What will happen to US health care? The 3 likeliest scenarios — and how they’d affect you.

Repealing and replacing the Affordable Care Act, aka Obamacare, is proving to be a Sisyphean task. While a Senate vote is expected as early as Tuesday, as of Friday morning, senators aren’t even sure what bill they’ll be voting on: a repeal with a replacement, a pure repeal, or something entirely different, as NBC reports. Each new draft so far has come with problems.

The Senate released its most recent iteration, the Better Care Reconciliation Act, on Thursday. That day the Congressional Budget Office updated its projection for the bill’s impact on insurance coverage and costs: By 2026 about 22 million more people will be uninsured than under current law, and out-of-pocket costs would likely rise, the CBO found. While that’s better than the CBO’s score for just repealing the Affordable Care Act outright — which could result in 32 million fewer insured and a doubling of premiums by 2026 — it is still a tough sell for moderate Republicans and their constituents.

Experts consulted by Mic characterized the new version as “basically identical” to the previous bill, with the same problems, but were hesitant to say the bill was dead just yet. “I’m reluctant to bet against [Senate Majority Leader Mitch] McConnell,” said Tim Jost, a professor of health care law at Washington and Lee University School of Law. “But ... he’s got a very wide gulf to gap.”

So what does the new bill do to the average American’s costs, precisely?

Most likely, your premiums next year would be higher. The CBO projects that in 2018, average premiums for benchmark plans would rise about 20%, because the bill discourages healthy people from signing up for health insurance by doing away with the individual mandate.

By 2020, premiums for the same plans would drop to about 30% lower, but those payments would actually buy you less coverage. How much less? Under current law, benchmark plans have what’s called an actuarial value — basically, how much your insurer pays, so you don’t have to — of around 70%. The latest bill would set benchmark plans at an actuarial value of only 58%. Back of envelope, that’s like paying $420 for an $1,000 cost (roughly the median price of an emergency room visit) versus just $300.

The CBO points out that skimpier plans are less desirable, so fewer healthy people would likely sign up — and because of the nature of insurance, that could hike other costs. Deductibles — the amount of money a consumer must spend out-of-pocket before insurance kicks in — might have to be set so high as to even be illegal. Someone earning as little $11,400 annually, for example, could face deductibles as high as $13,000. Unsurprisingly, the CBO projects that this environment will dissuade many people from purchasing insurance entirely, no matter how cheap premiums are.

What will actually happen — whether this or a different bill passes? Could the ACA stay in place? And, most importantly, how much will health care for 2018 onward actually cost you? Here are a few possible scenarios.

Scenario one: The replacement bill fails and the ACA stays in place

At this point, it’s not unthinkable that health care reform will get scuttled entirely.

Several senators spoke to Vox and indicated that pressure from activists was starting to heat up. Yet others told Politico that they were doubtful the replacement bill would be able to come to a vote, despite a handful of late-night sessions to try and work out a deal. The health care fight is getting so ugly that some Republicans are reportedly interested in abandoning it and moving on to other priorities like tax reform. There’s wide bipartisan consensus that the U.S. tax code could stand to be tweaked.

If the ACA survives 2017 in its current form, the process of buying health insurance would likely look a lot like it does today. “It looks like the plans next year are probably going to be a lot like the plans this year,” Jost said. “Except there will be fewer [plans] in some places and the premiums will be a little higher.” Other health care experts agreed that allowing the ACA to remain in place wouldn’t have particularly dire consequences.

Sara Collins, a health care economist and vice president at the Commonwealth Fund, said that if current law were to remain as is, the system would look largely the same as it did last year, with even the possibility of lower premiums on the individual market. “If the effort does fail, then the Medicaid expansion stays in places, the 19 states that haven’t expanded, they could potentially move forward and expand over time,” Collins said. “Carriers are also building the uncertainty over the administration over the mandate into premium prices.”

What will happen to your health care costs: If Obamacare stays in place — ending the uncertainty that has made insurers hike rates to compensate — then many people’s health care costs next year would likely stay the same or increase very moderately. For instance, for those using Tennessee Blue Cross and Blue Shield, Bloomberg reports, clarity would drop a projected premium hike of 21% to “near zero.”

Scenario two: The ACA stays in place — but the administration undermines it

Of course, the Trump administration could try to unwind the ACA without legislative help, which Jost points out it could do pretty effectively on its own. Indeed, the administration has arguably already begun doing this — for example, by re-working the Department of Health and Human Services website to replace instructions about enrolling in health insurance with testimonial videos about Obamacare’s ills.

But the biggest death blow Trump could deal to the Affordable Care Act unilaterally, both Jost and Collins said, would be to halt cost-sharing reduction payments — funds the federal government gives insurers in exchange for them offering cheaper exchange plans to low-income people. Trump has reportedly told his aides that’s something he’d like to do.

“If they cut those off they basically cause very serious problems for the individual insurance markets,” Jost said. “I think that it’s entirely in the hands of the Trump administration ... it’s up to them whether they want to destroy it or not, but if they destroy it, they destroy the individual market for 18 million Americans.”

What will happen to your health care costs: Withdrawing the cost-sharing reduction payments is possibly one of the most risky scenarios for consumers, their wallets — and even their ability to stay insured, Collins said. “It would create... havoc in the individual market right away, this year, because carriers set those premiums,” she said. “Carriers would probably pull out. They’re under contract right now to offer these plans for 2017 ... but state insurance commissioners might allow market plans to exit. And it would certainly create a lot of havoc for 2018.”

While nothing is impossible, a full repeal with no replacement seems politically infeasible: In addition to increasing the uninsured rate by 32 million people, it would lead, the CBO projects, to average premiums going up 25% by 2018. In cities like Denver, Chicago and Miami where premiums for benchmark plans are roughly $300 per month on average without tax credits, that’s an extra $900 dollars a year for coverage that could also likely cover less care.

But what about the chances of a repeal and replacement? Even if odds of passage are low, Jost said, it is not impossible that the BCRA could make its way to the floor, possibly with the help of Vice President Mike Pence in the event of a tie. If that happens, Jost said, the bill could gain new amendments that wouldn’t even be scored by the CBO before a vote.

“If McConnell’s plan is to really get 50 votes plus the vice president and people adding amendments late into the night, we could end up with a health care bill that nobody had ever seen before, with all sorts of unintended consequences,” he said. “I know there were complaints about the ACA, but people saw it and saw a score.”

Finally, another scenario for a different bill’s passage, floated by Vox’s Matthew Yglesias among others, is that the GOP reaches across the aisle and creates a new, bipartisan version of the bill. From a policy standpoint, this would likely be the easiest way to achieve Trump’s campaign promises of lowering premiums and deductibles without making drastic cuts to entitlement programs.

“This would be a very achievable goal if a dozen or so Republicans decided they wanted to work with Democrats to make it happen,” Yglesias writes. “A few simple tweaks, like bringing back ‘risk corridors’ and expanding reinsurance funding, would set off a virtuous circle. ... The result wouldn’t be a health care utopia, but it would be an improvement over the status quo, which is what people want.”

The Commonwealth Fund’s Collins agreed with Yglesias’ analysis, that a bipartisan compromise could easily allow the administration to fulfill its campaign promises: “The first thing that Congress could do in a bipartisan way is pass bipartisan legislation to permanently fund the cost-reduction payments,” Collins said. “There are also about 40 counties that won’t have at least one carrier. Congress and the administration ... could devise a solution to that ... possibly by allowing people to buy into Federal Employee Health Benefit Program in those counties.”

Of course, no such bill exists, and reaching across the aisle would certainly be politically risky for any Republican willing to do so.

What will happen to your health care costs: Again, if the latest BCRA passes, average premiums could likely rise in the short term, and fall relative to current law trends in the longer term. But the plans for sale would likely cover fewer health services — and fewer subsidies would be available to help offset costs. If a bipartisan bill were passed, your costs would be potentially be similar or lower to what you are currently paying — but of course, the devil is in the details, and plenty of uncertainty remains.

What can you do to protect your health and money?

To protect yourself, you’ll want to get and stay insured, especially if you’re concerned about any pre-existing conditions. Some health care proposals would require people to remain continuously insured in keep the protections for people with pre-existing conditions, said Laszewski. If the law changes, you won’t have to worry about penalties for lapses in coverage. “I would advise people who are sick to get good coverage now and hang onto it,” said Jost.

If you have employer-provided health insurance but might leave or lose your job, you should find out right away from HR if you will qualify for insurance promised by the Consolidated Omnibus Budget Reconciliation Act — known as COBRA for short — which guarantees coverage for a period of time after a job loss or a job change. Depending on the size of your employer and the nature of your plan, you may qualify for continuation coverage.

Another good move to make? Get the preventative care and services that the ACA currently makes insurers cover in full — while you still can. Even if you end up paying for procedures, you will be closer to using up your deductible, and if you do hit that number, it’s smart to pack in any procedures you need quickly after that, since those should be covered at little to no cost to you.

Finally, if you have access to Health Savings Accounts through work, continue funding them. HSAs, which allow you to set aside money for medical expenses without having to pay taxes on it, are widely popular with conservatives, who have even mulled changing the law to let people use HSAs to help pay for your premiums. For more advice, check out Mic’s guide to getting free or low-cost health care — regardless of your coverage status.