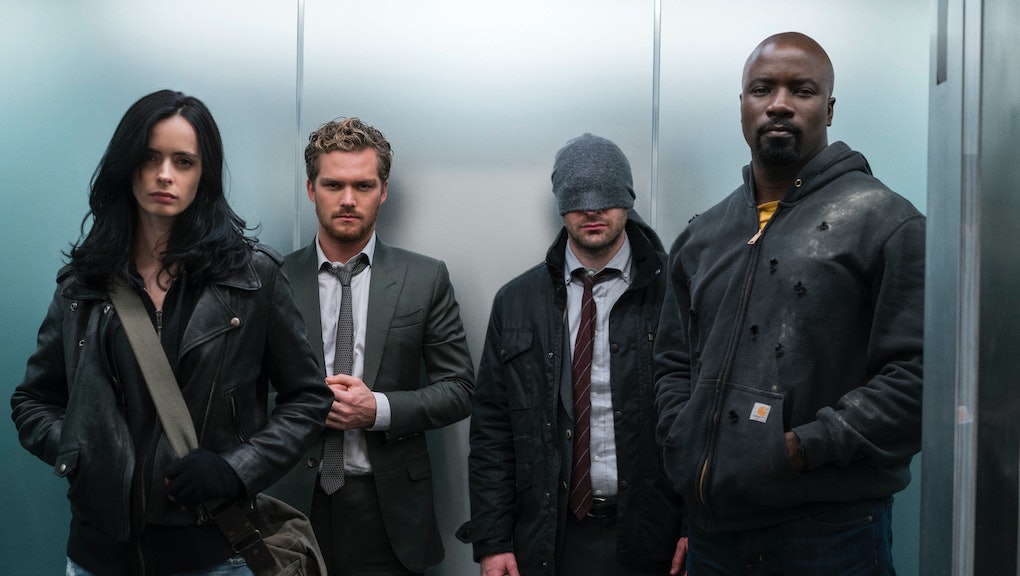 The simplest way to describe The Defenders, Marvel’s newest Netflix series, is that it’s The Avengers scaled down to a street level. Instead of saving the entire planet, they’re concerned with just saving the five boroughs of New York City. Still, the scaled-down stakes don’t mean any less fervor from Marvel fans — the similarly local-feeling Spider-Man: Homecoming is a smash hit. People are pumped for this stuff.

But before The Defenders could even assemble, a huge red flag was raised, or rather, a glowing mitt. The first season of Iron Fist — the show focused on the hero of the same name, who’s one of the four Defenders, along with Luke Cage, Jessica Jones and Daredevil — was more than underwhelming when in debuted in March. It was universally panned by critics, and this was after the show drew controversy with its casting of a white actor, Finn Jones, as its lead. The hope was that Netflix would right a previous wrong, and cast an Asian actor for a comic book character that was originally whitewashed during the martial arts boom of the 1970s. They didn’t, so the PR was already plenty disastrous before people caught wind of Jones’ charmless performance and the show’s atrocious dialogue. Suddenly, Netflix had a glaring, glowing weakness.

To put it another way: Imagine if Thor’s solo movie had the awful word-of-mouth buzz and reception of Suicide Squad before The Avengers came out — wouldn’t it make you hesitant to team him up with other, more likable heroes?

There are a few reasons The Defenders, which hits the streaming service on August 18, works as a series (critics were given four of the eight episodes). Obviously, it’s undeniably fun to watch some of the heroes meet for the first time and trade snappy one-liners — though in this department, no one has Jessica Jones (Krysten Ritter) beat; at one point she threatens to punch Daredevil so hard that he’ll see again.

Plus, at eight episodes, it moves at a quicker pace than the heroes’ individual Marvel shows, all of which run for 13 episodes, despite having 10 episodes’ worth of story to tell. But more importantly, whether an intentional meta-commentary or not, The Defenders and its principal characters aren’t the biggest fans of Iron Fist’s petulance. And boy, do they let him know it.

The Defenders catches up with Iron Fist, aka Danny Rand, not long after the events of his eponymous show. For those who skipped season one of Iron Fist: The mystical city K’un-Lun, where Danny was raised, was infiltrated by the Hand, a mysterious organization also seen in Daredevil that’s basically the Illuminati, but with ninjas. Long story short, the gateway to K’un-Lun is long gone, so Danny’s scouring the globe to find members of the Hand and defeat them.

For the purposes of the show, that brings him back to New York, which is central to the Hand’s operation, and, of course, the other heroes. But even getting Danny back to New York and meeting another member of the Defenders, which takes two episodes, is a tortuous slog. His opening fight scene in the premiere against an unknown assailant – in Cambodia, of all places — is an endless stream of frenetic quick cuts. I can’t even tell you what happened, aside from someone getting away, Danny getting a cut on his chest and my hand reaching for ibuprofen.

He’s still mind-numbingly uncharismatic, rarely breaking into any expression other than a scowl, or saying anything aside from drivel like, “I am the immortal Iron Fist” and “Only I can defeat the Hand.” He’s evolved from mansplaining kung fu to his partner, the very underappreciated Colleen Wing (we’re sorry, Jessica Henwick), to shutting down any attempts from Wing to lighten the mood. “Greatest city in the world,” she says, looking over a picturesque Manhattan skyline via helicopter. “Yeah, New Yorkers like saying that,” he grimly responds.

Broodiness on Iron Fist, a martial arts master with a superpowered, dope-looking hand that glows, still feels unnatural and, as we saw throughout his series, makes him immensely unlikable. It works far better on a character like Daredevil (Charlie Cox), who’s burdened with Catholic guilt and no shortage of personal demons. Is Danny’s life as a rich, white billionaire truly this melancholy?

The short answer is no, and it’s incredibly refreshing to watch the other characters knock him down a peg. In his first sit-down with Luke Cage (Mike Colter), Harlem’s hero calls out Danny’s single-mindedness, exorbitant wealth and whiteness: “I know enough and I know privilege when I see it.”

This stands in stark contrast with the pair’s history in the comics, in which they’re basically BFFs. Daredevil’s mentor Stick (Scott Glenn, ever sharp) labels Danny a “thunderous dumbass” for trying to take out the Hand by himself. Amazingly, even The Defenders press notes aren’t free of Iron Fist shade. When talking about the titular heroes, Sigourney Weaver — who plays the villain Alexandra — calls Jessica Jones the best female character on television, says Luke Cage is a fascinating character that exudes goodness and praises Cox’s portrayal of Daredevil’s multilayered persona. As for Iron Fist? He’s the idealistic “newbie.”

Ultimately, the Iron Fist-bashing plays a part in the character’s evolution, and it could possibly set him up for some sort of redemption after that horrible introduction. When Weaver points to Iron Fist’s idealism, she’s onto something: Stick’s criticism aside, it’s somewhat admirable that he tries to wipe out the Hand single-handedly, even if he fails.

Danny’s also the first hero to suggest they all team up; he looks at their combined powers as a strength while the others see one another as a nuisance. Matt Murdock doesn’t want to don the Daredevil suit again, despite his innate urge to fight crime. Jessica Jones is still reeling from that traumatic showdown with Kilgrave; she’d rather self-medicate with a bottle of liquor. Luke Cage feels indebted to Harlem more than anything else. Surprisingly, Danny could end up being the glue that holds this team together. That’s not just important for the other heroes in the context of the story, but it’s also important for how fans perceive this character. (It’s in Netflix’s interest that audiences grow to like this guy, since we’re going to have at least one more season with Danny Rand on his lonesome.)

Even his relationship with Luke starts to move in the right direction as the crossover show goes on — though I’d describe their dynamic less like a comic-book bromance and more like a pesky little brother (Danny) trying to seem cool in the eyes of the elder sibling (Luke). But that’s not a bad thing; it befits both characters, and for Danny — who lost his parents and came to terms with his childhood friends caring little for his miraculous return — it’s a significant budding friendship.

Strange as it may sound, The Defenders works in spite of Iron Fist’s presence, but he could also be the show’s most integral character. It’s just as well: I can’t wait to watch the next four episodes — Iron Fist and all.

The Defenders is available on Netflix Aug. 18.