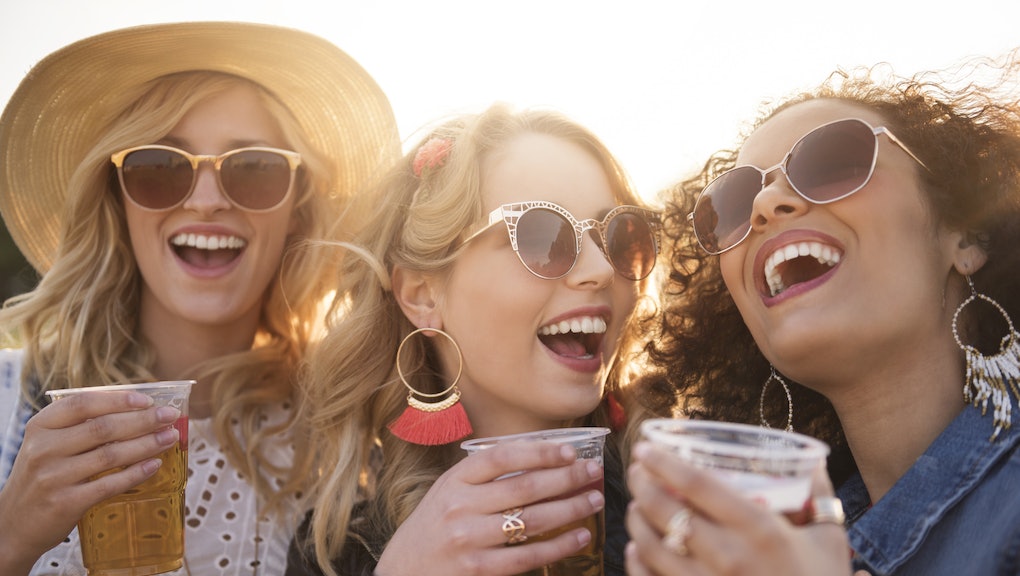 Put down your man beers, ladies: Aurosa Beer for Her is here — because apparently all those other beers were “for him.”

What does it mean for a beer to be “for her”? According to the website:

Aurosa is a representation of a woman’s strength and a girl’s tenderness. The two contrasting tempers, present in the female essence, are depicted through the elegant design yet the strong, unfiltered taste.

Aurosa was born to prove that women can succeed anywhere without having to adapt and sacrifice their natural femininity. Women have been disregarded in the beer industry but owing to determination and faith in herself, Aurosa is set to redefine the perception of beer.

The brainchild of Martina Šmírová, Aurosa is a semi-dark lager that comes packaged in a shapely imitation marble bottle — pleasing to the feminine eye!

According to Cosmopolitan, Aurosa’s Beer for Her hit the United Kingdom last week. The beer’s target market appears none too pleased with the arbitrary gendering of a universally popular beverage, airing their grievances on Twitter.

“#beerforher?” one user wrote. “A beer for women?!?!? Oh fuck right off Aurosa JUST FUCK RIGHT OFF AND TAKE YOUR BEER-FLAVOURED LAMBRINI WITH YOU.”

The Pool put it most bluntly, remarking that the product’s “#BeerForHer campaign will finally let women drink a drink they’ve been drinking for centuries.”

When asked what she thought of the beer-for-women concept, Brooklyn, New York-based bartender and friend Julia Miller’s first thought was “ew and also just ew.”

“Beer being the ‘drink for men’ is a contemporary marketing gimmick, as beer is one of the oldest drinks in human history,” she wrote over text message. “Women don’t require a different variety of beer, one more suitable to their biological requirements because women don’t have a different set of requirements.”

“The whole idea of needing a more feminine beer is pretty exclusive and out of touch even with the identification of being a woman,” Samantha Zulch, a Brooklyn bartender, visual artist and friend, added. “It seems really counterproductive to me.”

Aurosa had not responded to request for comment at time of publication, but told Cosmo that their product “was never intended to take part in sexism, feminism or the like.”

“We never said that beer was not for women, we simply want to break the misconception that it has garnered,” an Aurosa representative told Cosmo, adding:

What our message carries is different, we are here to support those women who like to celebrate their femininity and elegance, who want a nice glass of beer with their dinner and who enjoy something elegantly packaged. That is all. We are giving them choice, we are giving them diversity and there should be nothing shameful against that.

The beer industry would benefit from increased representation, but putting out a one-note, pastel-packaged product under the assumption that women will like it simply because it’s pink only exacerbates the problem. As Munchies writer Jelisa Castrodale put it, the message that sends is: “Here, ladies ... You neither know nor care about your beer, so here’s an elegant vessel for you to raise instead. Why aren’t you smiling? You look so much prettier when you smile.”