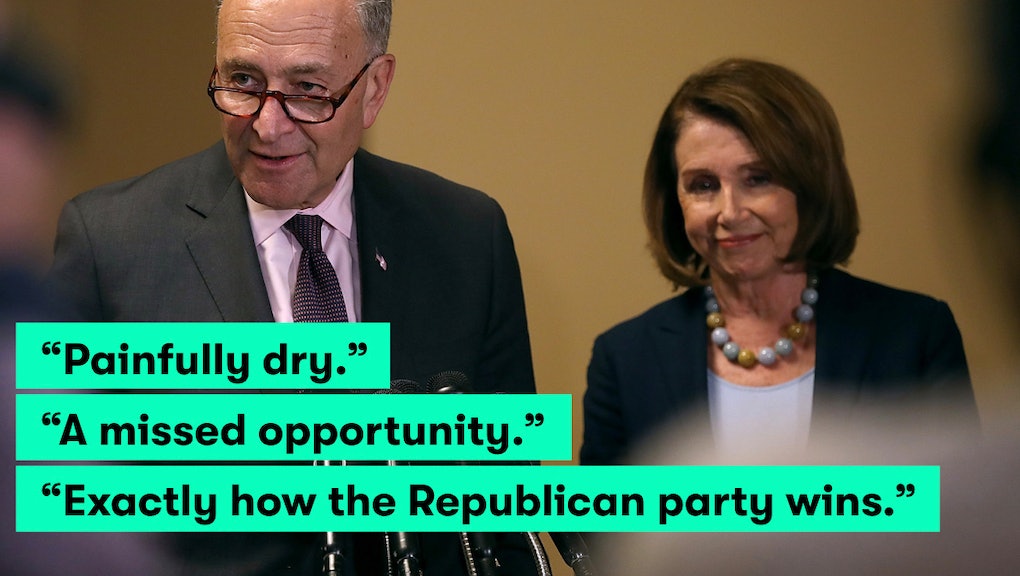 Democrats have an image problem.

Despite President Donald Trump’s unpopularity — his approval rating is historically low — a new Washington Post-ABC News poll found that only 37% of Americans believe that the Democratic Party “stands for something,” while 52% say that it “just stands against Trump.” And, while more young people voted for Bernie Sanders than cast ballots for Hillary Clinton and Trump combined during the 2016 primaries, registered voters (and particularly young voters of color) stayed home by wide enough margins in November to have likely cost Clinton the election.

So, on Monday, the party will roll out its new campaign platform and slogan, titled “A Better Deal: Better Skills, Better Jobs, Better Wages.”

Already the subject of deep derision by liberals and conservatives alike, the slogan is reportedly the result of several months of focus-group testing by Senate Minority Leader Chuck Schumer and House Minority Leader Nancy Pelosi, representing an attempt on behalf of party leadership to move away from so-called identity politics and put forward a unified economic message in the Trump era.

But advertising and marketing executives panned the effort to Mic in interviews, calling the sloganeering “painfully dry,” “a missed opportunity” and “exactly how the Republican party wins.” All of the executives suggested that the party has, more than six months after the painful loss of Clinton’s presidential race, not learned the lessons of a campaign that failed to connect with enough voters in key states.

“There’s just no soul there,” said Joey Ellis, a partner at GrandArmy, which has worked with Beyoncé, Kanye West, UNIQLO and Tuft & Needle. His co-partner Eric Collins added, “With ‘Make America Great Again,’ you have this four-word slogan where every word counts. With ‘Hope and Change,’ that was also super-clear. But ‘Better Skills, Better Jobs, Better Wages’?”

“I don’t know who’s doing this kind of stuff over there, but this is just pretty poor writing on its face.”

Charlie Jones, president and founder of the Brand Intersection Group, which has worked with SoulCycle, Sweetgreen and Mic, said that the party is failing to articulate what it means to be a Democrat.

The party is failing to articulate what it means to be a Democrat, Charlie Jones said.

“Modern brands that crush it don’t just sell their product or service. They sell their tribe,” he explained. “I don’t think the Democratic party has made it very clear what a Democrat even looks like: Why is it aspirational and cool to be one?”

“Democrats don’t do a good job at telling human stories, and using narrative constructs,” he added. “It often feels like it’s a message du jour that’s almost always a counter-punch, instead of being intentional and proactive about what they care deeply about.”

All of the experts urged Democratic leadership to study former President Barack Obama’s and Bernie Sanders’ campaigns as models for how to build a brand that resonates with the electorate.

“Bernie resonated because it never felt like he was trying to portray himself a certain way to win votes,” said Emily Heyward, the co-founder and chief strategist of Red Antler, the agency behind startups like Casper and Birchbox.

From a branding standpoint, GrandArmy’s Ellis said, Sanders (and Obama) told a personal story effectively and was able to connect with the public on an emotional level, not by just trying to sell people on policy. “That seemed to be what was missing from Hillary Clinton’s campaign,” he added. “Bernie probably had the least figured-out policy positions, but he talked about the emotional benefits of his ideas.”

In a written statement to Mic, DNC communications director Xochitl Hinojosa defended the messaging. “We have seen time and again that the economy continues to be the No. 1 issue that keeps families up at night,” she wrote. “That is why the House and the Senate have worked on an economic message and a plan that will help people by creating jobs, raising wages and providing workers with the skills they need to succeed.”

But the experts who spoke with Mic said that the sloganeering would likely not stand up to their formidable opponent: Despite a roller-coaster first six months in office, said the experts, Trump remains a master at branding.

“Trump is not world class at anything except branding and marketing,” Emmett Shine, the founder and president of Gin Lane Media — which has worked with companies like Harry’s, Sweetgreen and Warby Parker — said to Mic. “That brand and marketing won him the election, which says how good he really is.”

And according to Brand Intersections’ Jones, it’s not just Trump who has been more successful at marketing himself than Democrats. “Even someone who doesn’t know much about politics can play back Republicans’ long-held mantras about what they are about,” he noted.

So what should the message be?

Jones, for one, believes that the Democrats have done a poor job connecting the heightened progressive energy, typified by resistance marches and town hall protests, with a clearer sense of the party’s purpose. “The Democratic party should be able to say that protesters are a perfect demonstration of America at its best, where any voice gets heard, no matter how small,” he said. “And that voice counts just as much as the billionaire’s vote. And thank god we live in a place where people can do that.”

“The party should be able to say that protesters are a demonstration of America at its best, where any voice gets heard, no matter how small.”

Gin Lane’s Shine agreed that Democrats should be trying to tap into the surge in political activism amongst everyday voters in the aftermath of the election. He offered up a simple tagline, “Do the Right Thing” — a reference to Spike Lee’s seminal 1989 movie about race relations in Brooklyn that some observers said helped elect New York City’s first black mayor, David Dinkins — and said Democrats should consider harkening back to the spirit of the 1960s, “where there was a call to arms for [every citizen] to affect change.”

Whatever message the party settles on, Red Antler’s Heyward urged Democratic leadership to begin thinking more like a consumer brand and to take inspiration from outside of the political realm. “You need that headline,” she said. “Simplicity is key.”