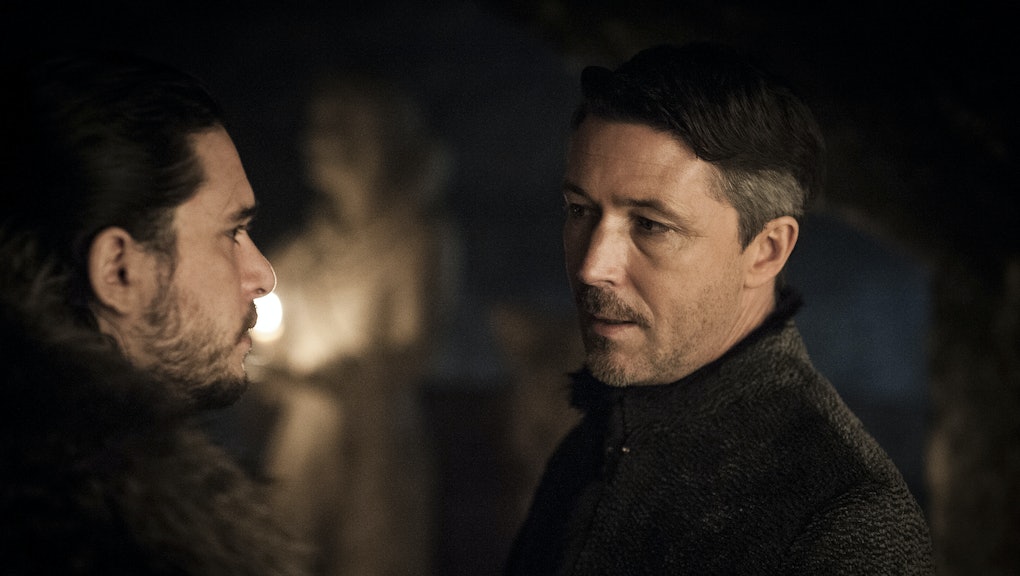 The moment that punk-pirate douchebag Euron Greyjoy intercepts Yara Greyjoy’s army, you know everyone onboard — including Ellaria Sand and the Sand Snakes — is screwed. It shouldn’t come as a surprise that some of the Sand Snakes are eliminated in season seven’s second episode, though; the Dorne subplot was Game of Thrones’ single weakest arc to date. What is shocking is Theon Greyjoy’s expression, once his sister is captured by their sadistic uncle.

Euron beckons him to come over and grab her. But with just a few twitches of the face, it’s clear: Faced with the prospect of capture and torture, Theon reverts back to “Reek,” the traumatized whipping boy of Ramsay Bolton.

Rather than face his uncle, Theon literally jumps ship. It’s an agonizing and frustrating moment for anyone rooting for Theon, who was in the midst of a redemptive arc years in the making, one that started with him freeing Sansa Stark from Ramsay’s grasp. But when it counts, Theon’s true nature is revealed: After all he’s been through, Theon’s still Reek.

Characters revealing their true selves, for better or worse, is a theme that plays out all over the latest episode of Thrones. That may sound like hyperbole — we’re seven years into this show and yet still unclear on some characters’ underlying motivations? Well, yes and no.

People on Thrones change all the time. Look at the way Theon and Jaime Lannister have evolved over the course of the show. Others, like the ever-scheming Littlefinger, are still an enigma the viewer can’t quite solve. Not everyone’s as black and white as the Starks. But seeing where characters stand this late in the series gives us a better of idea of who they really are and where they’ll likely be when things draw to a close. And for Theon, at least, it’s not a promising sign.

Looking elsewhere, it’s clear that Sansa’s warnings to Jon Snow have fallen on deaf ears. In this season’s premiere, she urges him not to make the same stupid mistakes as her brother and their father (yes, we the audience know Jon’s real parentage, but Sansa doesn’t). Those mistakes boil down to one fatal error: being honorable to a fault. Her philosophy, somewhat borrowed from Cersei — whom she’s already admitted to learning a lot from — is a touch ruthless, but it’s also realistic.

But Jon and his signature Stark idealism remains stubbornly intact. He plans to head south to Dragonstone to meet with Daenerys Targaryen, at the behest of Tyrion Lannister, someone he briefly hung out with back in season one. While the idea of Jon and Dany meeting face-to-face — the embodiment of the “ice” and “fire” in George R.R. Martin’s A Song of Ice and Fire, in my view — is pretty dope, I wouldn’t rush to meet with her if I were Jon. As Sansa points out, their families’ shared history isn’t exactly cordial; the “Mad King” Aerys Targaryen burned their grandfather alive. Plus, I’m calling it: Dany is totally a villain.

Nevertheless, he’s heading to Dragonstone, but before he does he goes to the Winterfell crypt to see Ned’s tombstone. Naturally, Littlefinger’s waiting in the shadows and we see their first exchange in the show’s history. Standing right next to Ned Stark’s statue, Jon has the same reaction as Ned does in season one when Littlefinger brought him to a brothel and chokes Littlefinger, pressing him up against the wall.

The warning: Stay away from Sansa. (We’ll see how that goes.) Thrones is pretty overtly establishing that Jon Snow has learned nothing — Ygritte called it — from his past, and from the people around him. He’s following in Ned’s footsteps, and while that’s an honorable stance, look where it got them. Ned’s dead, and Jon’s already died once.

Meanwhile, at Dragonstone, Daenerys has a tense exchange with Varys. It’s understandable: She perceives him as someone who’s always looking out for his own interests, rather than being loyal to any one ruler or faction. In a way, she’s right, based on his own admission: He’s in this for the common folk of Westeros.

Varys, like Littlefinger, remains one of the most mysterious figures in the realm: It’s hard to pinpoint exactly what his endgame is, or if this entire series really is just a shadow war between those two characters, who are both constantly vying for power. But when Varys explains to Daenerys what motivates him and where he comes from, it speaks to a certain truth. He rose from nothing, was born on the street and mutilated as a child, and then tossed away like nothing. (Though he had the last laugh against his mutilator.)

It makes sense that, on some level, Varys is looking out for the everyday people of Westeros — the Ed Sheerans, if you will (sorry). Even if he’s still in it for himself, it’s hard to imagine him wanting to lay waste to the Seven Kingdoms, unlike Littlefinger, who lives by the mantra that “chaos is a ladder.”

There are smaller moments in the episode that are no less telling: Arya chooses to head back to to Winterfell instead of killing Cersei in King’s Landing (until she has a run in with her direwolf, Nymeria); Daenerys emphasizes that she wants to take control of Westeros but doesn’t want to burn it to the ground in the process. These kinds of developments feel more resonant than ever. With so few episodes left, every little decision these characters make could literally change the shape of Westeros.

Case in point: If Hot Pie doesn’t tell Arya that Jon Snow is the King in the North, it’s possible she immediately continues on her mission to kill Cersei. Or, if Theon doesn’t totally shit the bed, maybe he’s able to somehow save his sister. But that’s not who he is — he’s Reek.