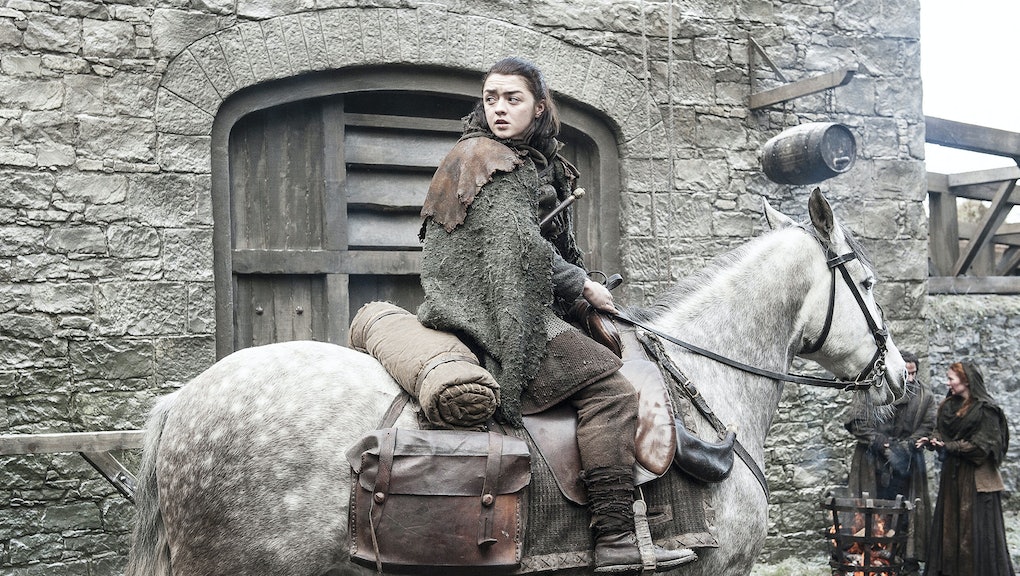 ‘Game of Thrones’ Theories: Arya and Nymeria finally reunited, but what does it mean?

We expected a few reunions and first-time encounters during the penultimate season of Game of Thrones, but perhaps none were as overdue as Arya Stark once again crossing paths with her direwolf, Nymeria. Arya seeing Nymeria again — and the subtext that comes with their reunion — was one of several fan theories that we’re keeping track of this season. The two finally met once again during Sunday night’s episode, an encounter that was years in the making; the last we saw of Nymeria, she was being sent away by Arya in the second episode of the series, so the wolf could avoid being executed by Lannister soldiers for biting the still-alive Prince Joffrey. Arya pushed her away to keep her safe.

What’s Nymeria been up to since? In the books, she’s been leading a pack of normal-sized wolves in the Riverlands, and the show implies a similar scenario once Arya finds her again. And my god, Nymeria is aggressively swole.

Based on the closeups of Nymeria’s face while Arya talks to her, the direwolf recognizes her former owner. Arya pleads with Nymeria to come back to Winterfell with her — Arya’s just learned, from Hot Pie of all people, that Jon Snow is King in the North and the Starks are in control of Winterfell once again. Ultimately, though, Arya comes to her own conclusion. “No,” she says quietly, more to herself than to Nymeria. “That’s not you.” And Nymeria runs off with her pack.

Some fans read Arya’s line as literal; that the giant wolf she sees in the woods isn’t actually Nymeria. To be clear: That is her. Showrunners David Benioff and D.B. Weiss confirmed as much in Thrones’ post-episode featurette, breaking down the scene.

“Arya is not domesticated, and it makes total sense that her wolf wouldn’t be either,” Weiss explains in the clip. “And once the wolf walks away, at first she’s heartbroken to have come this close, then she realizes that the wolf did exactly what she would do if she were that wolf.”

So there’s no confusion to be had over Nymeria’s return; the question that remains is what Arya will end up doing after her emotional encounter. Earlier in the episode, she’s dead-set on heading to King’s Landing to kill Cersei Lannister and cross the biggest name off of her kill list, but after hearing about Jon’s success in the Battle of the Bastards, she instead chooses to head up north at the prospect of reuniting with her family. (It’s worth noting that she was closest with Jon — remember, he gave her Needle.) “That’s not you” doesn’t just apply to Nymeria, it applies to Arya as well.

Can Arya realistically return to Winterfell and reconcile with Jon and Sansa, after all she’s been through and what she plans on doing? Let’s not forget, it was just last week that she murdered an entire family — no matter how badass that is, it’s a pretty messed up thing for a kid to do. Arya’s changed quite a bit over the years, and you can see that in how she acts with Hot Pie after a couple of seasons separated; she barely registers any emotion in seeing one of her only friends again and is more interested in eating than having a conversation. She’s still a Stark, clearly, but part of her is “no one,” an assassin who has to continue her path of vengeance no matter the cost.

My money’s on Arya changing her mind and turning back toward King’s Landing to kill Cersei, though we can’t say for sure until we see where she’s headed in the next episode. (Wherever we pick up with her in the next episode, odds are Ed Sheeran won’t be anywhere nearby.)

Now, will this be the last we see of Nymeria on Thrones? The logical part of my brain says yes — she served her purpose as a reflection of Arya and her underlying motivations. Also, a CGI direwolf will cut into the CGI dragon budget, and we know how much HBO loves their dragons.

But here’s a thought, even if it’s far-fetched: What if Nymeria makes another appearance at the end of the show, fending off the impending White Walkers with her pack of wolves? A gigantic wolf against the Night King and a horde of ice zombies could be the apex of Thrones fan service.

• The prophecy of Azor Ahai, the legendary warrior who will supposedly be reborn and ward off the White Walkers, and which character on the series might be Azor Ahai reborn, took an interesting turn this week. When Melisandre meets with Daenerys Targaryen, she recites part of the prophecy in Valyrian — “the prince who was promised will bring the dawn” — and Dany points out that it refers to a male. But Missandei clarifies that the noun has no gender in High Valyrian — it actually means “prince or princess.” Score one for Dany in the Azor Ahai column.

• What’s Varys’ ultimate goal? Daenerys is skeptical of the eunuch’s loyalty to her cause, and he provides an honest answer to her inquiry. He’s not going to blindly follow a certain house or ruler; he wants to follow whomever will best serve the realm and the common folk of Westeros. This falls in line with Varys’ own past: He was born into nothing and mutilated as a child. For now, he believes Daenerys is best for the realm, so his loyalty lies with her. (For his sake, I hope he stays loyal to her — she threatens to burn him alive if he betrays her.)

• At the Citadel, Archmaester Ebrose suggests to Sam Tarly that a book on House Lannister might be worth his time. It’s a moonshot, but could there be something in those pages that hints at Tyrion potentially being half Targaryen?