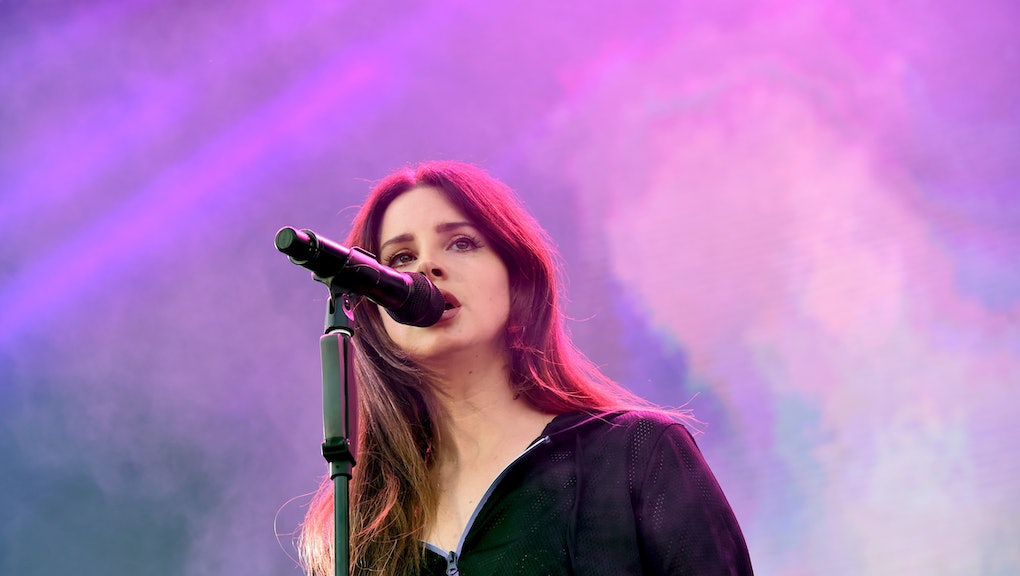 Lana Del Rey has always been more than the sonic equivalent of an Instagram filter. Whether by remixing Spector-centric pop through “Summertime Sadness” or by collaborating with artists as stylistically varied as Stevie Nicks and A$AP Rocky, the 32-year-old singer has consistently adapted, challenged and proven herself by showcasing a willingness to make room for what’s new while simultaneously delivering it through a nostalgic gaze.

And the singer-songwriter’s approach to her latest album, the recently released Lust for Life, has been no different. But it still feels surprising that she’s taking such a political path.

That’s odd, especially since she’s been vocal about her intentions. Recently, Del Rey, in an interview with Pitchfork, made clear that she wouldn’t be using American flags as part of her on-tour visuals; in May she told Elle U.K. that an apolitical approach to Lust for Life would be tone deaf.

“It would be weird to be making a record during the past 18 months and not commenting on how [the political landscape] was making me or the people I know feel, which is not good,” she said to the magazine. “It would be really difficult if my views didn’t line up with what a lot of people were saying.”

But as we can glean from Lust for Life, those views certainly do line up with many other people’s, and she presents them boldly and poetically: in the cool, slightly militaristic “Coachella — Woodstock in My Mind,” Del Ray delivers a chorus of “What about all these children?/ And what about all their parents?” while the quiet “When the World Was at War We Kept Dancing” poses the question, “Is it the end of an era?/ Is it the end of America?”

Which is a more than a fair question, particularly in the wake of the current political climate. But uniquely, Del Ray delivers her rhetoric less under the banner of performative wokeness than by weaving her viewpoint through the same melodies we’ve long attributed to her. “God Bless America — And All the Beautiful Women in It” uses (familiar) heteronormative imagery to paint a picture of the dangers of being a woman (“Even walking alone I’m not worried/ I feel your arms all around me”). “Beautiful People Beautiful Problems” melds dreamy instrumentals with the overt acknowledgement of privilege.

The record isn’t hopeful, nor is it a call to arms, but it is a nod to our cultural landscape. And that’s a relief, particularly in a time when political and social alignments are crucial, and apathy is a synonym for complacency. Lust for Life may still brim with nostalgia, but where 2012’s Born to Die and 2014’s Ultraviolence seem to romanticize the past, Del Ray now uses it as a type of warning. And the subtlety of her messages are also an exercise in awareness: As in, if you’re choosing to lose yourself in the back-in-the-day flower crown aesthetic you’ve attributed to Del Rey since 2012, you’re choosing the easiest road. And that makes you part of the problem.

Of course, nostalgia in the MAGA era can be risky. An entire presidency has come to hinge on looking backward, which makes any positive acknowledgement of the vintage heyday seem out of touch, to say the least. But Del Rey, while steeped in nostalgic imagery, has never been a vintage artist. She may have aligned herself with the Wall of Sound or sang about love in the all-encompassing way the Crystals did, but, as proven by tracks like “Brooklyn Baby,” her lyrics have always pushed back and exhibited intense self-awareness. (See: “They judge me like a picture book/ By the colors, like they forgot to read.”)

While critics may not have known how to categorize her, Del Ray has always known who she is. And that not only explains why she clapped back at claims of fatalism, but also makes her transition into a socially conscious and politically aware person seamless and easy — so much so that it’s surprising, as if she’s never spoken her mind.

More importantly, it’s genuine. By not being so overt — by not declaring Lust for Life as the album equivalent of a rallying cry or the catalyst for a makeover — Del Rey is using her music to mark a natural progression of self. It would be disappointing for her to subscribe to the same mandates she did in 2012; to sing only about men, or to be awe-struck by fame as if she were channeling her 2012 Saturday Night Live debut. It would be proof of creative stagnation for her to ignore the realities of the world around us after being heralded for smart songwriting in the past. At the same time, it would be disingenuous for her to abandon the persona we know completely by abandoning her style, her warm and accessible sound, and the dream-like qualities that carry us through her music.

The thing is, American dreams have since shifted into nightmares. And while Del Rey may deliver her messages from atop the Hollywood sign, her transition into increased social awareness ensures that her words carry meaning, even if they’re disguised as a tribute to the past.