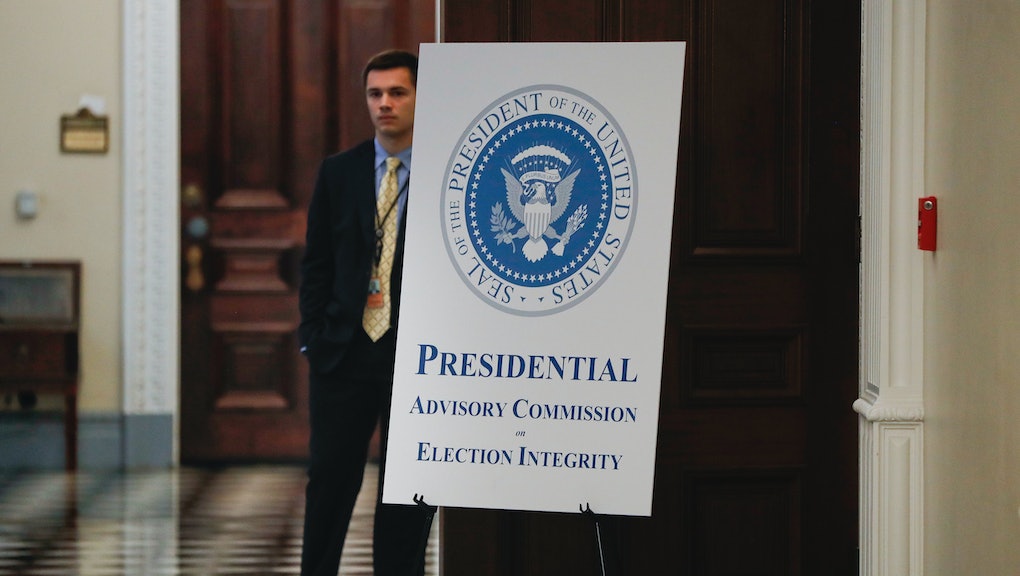 Opponents of the Election Integrity Commission suffered a blow on Monday when a federal judge dealt a defeat to a privacy group that’s trying to prevent the collection of data on voters nationwide.

The panel, which met in Washington for the first time on Wednesday, caused a national stir by requesting a trove of personal information on registered voters from elections officials.

Among the many lawsuits filed against the commission, with varying success, was one by the Electronic Privacy Information Center. The group, known as EPIC, argued that the panel had failed to conduct a privacy assessment required by federal law before asking states to hand over voter data.

As a result of the EPIC suit, the panel sent out an email asking states to hold off on sending any data — even though a number of officials had already said they wouldn’t be cooperating, wholly or in part.

But on Monday, EPIC said in a summary on its website that ultimately, the court decided it couldn’t “halt the Commission’s plan to aggregate millions of voter records” because the panel isn’t subject to statues that “govern the conduct of federal ‘agencies.’”

Kris Kobach, the Kansas secretary of state and gubernatorial hopeful serving as vice chairman of the panel, cheered the outcome.

In a statement provided through the office of Vice President Mike Pence, the chairman of the panel, Kobach called the ruling “a major victory for government accountability, transparency and the public’s right to know about the integrity of our elections processes.”

“The president formed this commission to identify ways to enhance the American people’s confidence in the integrity of our elections. The Commission requested this publicly available data as part of its fact-gathering process, which is information that states regularly release to political candidates, political parties and the general public. We look forward to continuing to work with state election leaders to gather information and identify opportunities to improve election integrity.”

EPIC, on its website, said it “intends to press forward with the lawsuit.”

It wasn’t immediately clear whether Kobach and the panel would renew its request for data in precisely the same form. Commenters who sent the panel emails prior to the first meeting were upset with the ask, to say the least.

Meanwhile, the dispute over the panel, its members and its aims continues.

The panel’s critics say it’s a dog-and-pony show created to justify President Donald Trump’s unproven claims of massive voter fraud in the 2016 election and to make voting laws more restrictive. Panel supporters, including some of its members, say fraud is a real issue that robs deserving citizens of the true value of their vote.

One member of the commission, Hans von Spakovsky of the Heritage Foundation, called out the non-partisan Brennan Center for Justice, among others, tweeting, “Claim I’ve disenfranchised voters is contemptible lie.” He also linked to a 2008 first-person piece he penned for the Wall Street Journal about his father’s perilous escape from communism in Russia.

The Center, which has broadly questioned whether the panel exists merely to advance tools of voter suppression, had tweeted that Von Spakovsky was “a dangerous addition” to an “already troublesome Commission,” linking to a page with critical biographies of the panelists.

Virginia Gov. Terry McAuliffe, who commented on Monday about his participation in an upcoming protest against the repeal of the Affordable Care Act, was in the front ranks of state officials bucking the election commission. Trump has previously suggested there was “serious” voter fraud in Virginia, which the governor has disputed.

“The president has a hard time believing or understanding the reality or accepting the fact that Hillary Clinton got three million more votes. It’s a fact. Get over it. You’re in the White House. You’re president,” McAuliffe said when asked about Trump’s panel.

“Every time he does this, he undermines the democracy of our country,” the governor said. “And we’ve got men and women wearing the cloth of our country today fighting for our basic freedoms and liberties, and he is hurting our prestige in the world by continually chasing this false story.”